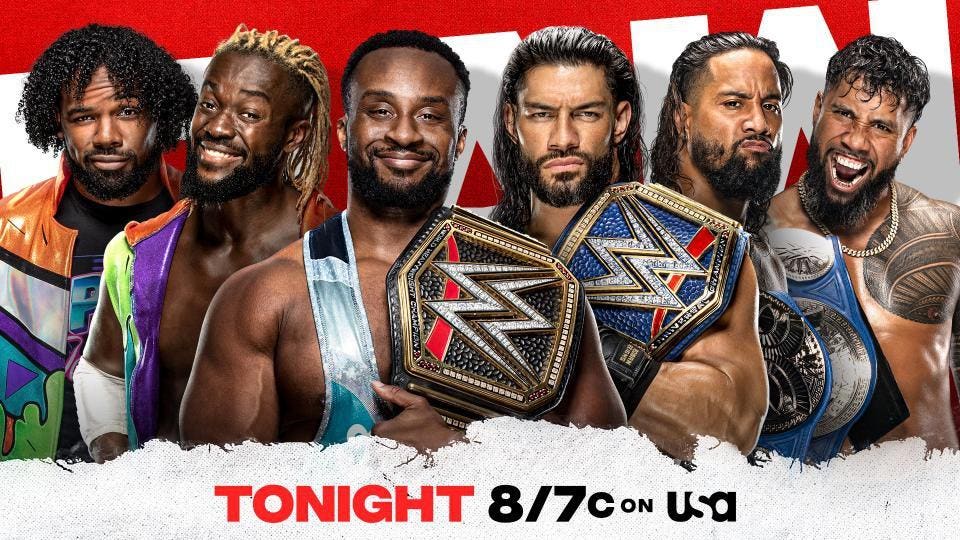 In a landmark week for professional wrestling, WWE Raw advertised Roman Reigns and The Usos vs. The New Day in yet another hotshot move with AEW threatening to defeat Raw in the 18-49 demographic for the third consecutive week. With AEW Grand Slam emanating from Arthur Ashe Stadium this Wednesday, Raw faces tough competition from Monday Night Football as public team the Green Bay Packers host the Detroit Lions.

Per WrestleVotes, Reigns’ presence on Raw could give way to top stars appearing on both brands moving forward despite next month’s WWE Draft.

WWE Raw’s audience was down 10% with 1.670 million viewers against

Roman Reigns and The Usos def. The New Day

The New Day is starting to feel like a super group and you love to see it.

Of course, Big E had to wait through a Pavlovian “You deserve it” chant.

Corey Graves got cut off by Roman Reigns’ pyro multiple times during his entrance.

A festive Roman Reigns wore a red glove in honor of being on Raw.

The announcers were playing up Big E’s face off with Roman Reigns as a special moment (which it kinda was), however we just saw it three days earlier.

Bobby Lashley on a warpath is exactly how he needs to be booked while MVP is on the mend. Lashley spearing Roman Reigns gives Reigns a potential fourth opponent (The Demon, Brock Lesnar, Big E) down the line.

If the goal of this storyline is to get Doudrop over with these repetitive wins, it will be a very slow-moving goal.

Byron Saxton wondered whether or not it was finally time for Eva Marie to move on and that’s a question that she should also ask of WWE when it comes to this feud.

All these years, I had no idea Randy Orton’s theme included the lyrics “they council me.” It took Riddle singing these lyrics for me to realize.

It’s way too early to be doing a grudge match like this.

After the debacle with Charlotte Flair, WWE is now making a habit of making all Nia Jax matches look like shoots.

In a rare moment, Nia Jax was choked out similar to Andre the Giant in The Princess Bride.

There are no babyfaces in this feud, but Shayna Baszler definitely emerged as the bigger heel after using the steel stairs to destroy a screaming Nia Jax’s arm.

I don’t know why Shayna Baszler had to be so conflicted and remorseful about (kayfabe) breaking Nia Jax’s arm. Is she a heel or not?

Mustafa Ali and Mansoor vs. Angel Garza and Humberto Carrillo

This was a battle between two promising teams that WWE does nothing with.

Carrillo and Garza had a great double-team finisher where Garza did a running dropkick while Ali was trapped in an “Emma-Lock.”

Rhea Ripley struggled with her lines about Connor’s Cure and it my have been because she was getting emotional talking about him.

WWE noted Rhea Ripley used her one and only save, which is a rule WWE acknowledges only when they feel like it.

After seeing how women’s tag team champions are booked outside of Sasha and Bayley, I don’t know whether or not this is a gift or a curse for Rhea and Nikki A.S.H.

Charlotte Flair demanded that Alexa Bliss bring back the old Alexa Bliss, and it had the same energy as Vince McMahon’s iconic plea for the old Stone Cold.

Charly continues to be a very, very popular doll.

If this promo exchange turns into a shoot-style like Ruby and Britt Baker, Charlotte Flair is a sitting duck for obvious reasons.

This was almost the first time Alexa Bliss was laid out, however it was only temporary as she came right back and laid out Charlotte.

Sheamus pulled his mask off with the intensity of Hulk Hogan ripping off his shirt.

Sheamus got his knees up for a Swanton Bomb and Jeff Hardy’s back landed directly on Sheamus’ knees.

There’s an outside chance Roman Reigns walks out of this match to protect him from “losing.”

This match was as good as advertised, which makes it sad that it didn’t get the proper buildup because this should have been on pay-per-view.

As much as I love MVP, Bobby Lashley has more than held his own as a solo character throughout the night.

Bobby Lashley brought in a steel chair and I thought it was a DQ finish to get these guys out of having to lose, but there is no DQ in Triple Threat matches.