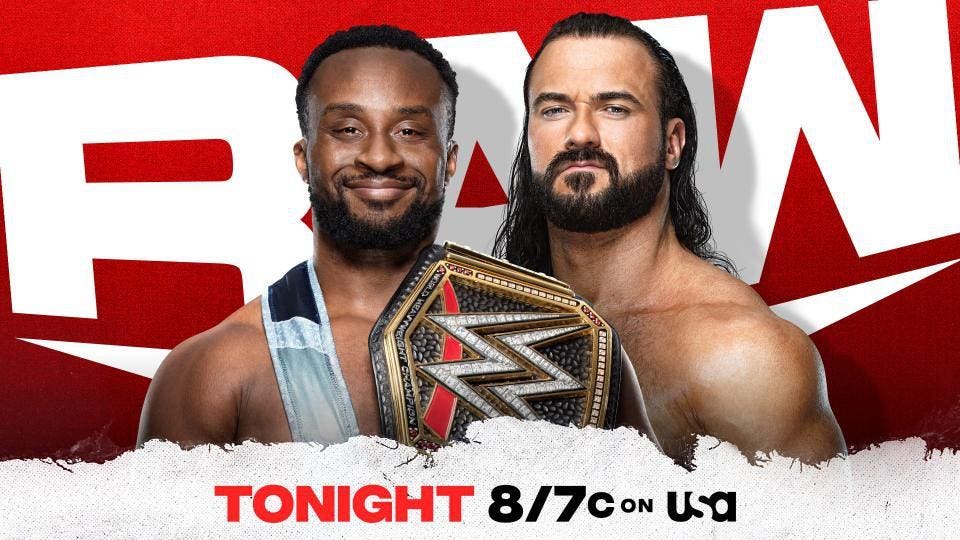 Big E’s nipples quickly became the focus of this promo, and while this may not be fitting of subject matter for a world title feud, Big E was very popular with this crowd.

WWE is milking this transitional period where SmackDown stars can appear on both shows as The Usos will face Drew McIntyre and Big E.

Xavier Woods def. Ricochet—WWE King of the Ring, First Round

Ricochet hearkened back to his past by referring to himself as “King Ricochet.”

WWE teased the idea of Xavier Woods facing Kofi Kingston, which is a match that would be very intriguing. The only thing standing in the way of this New Day showdown is Jinder Mahal.

This match was quicker than an NXT 2.0 match, and following the match, Mustafa Ali once again snapped and shoved Mansoor. Between this team and the Mysterios, WWE sure loves its slow-burning breakups.

Byron Saxton astutely asked how Cedric Alexander and Shelton Benjamin were able to reunite so suddenly after such a bitter split, and it was explained by Corey Graves as “growing pains.”

If WWE had any sense, they would be heading this team up heading into Saudi Arabia. As of right now, they’re not even on the show.

This match ended just as Corey Graves started getting ready to bury Dana Brooke for a second-straight week. Shayna Baszler has to be considered the favorite to win this tournament.

If I didn’t know any better, I’d say Randy Orton was a heel as he continues to leave Riddle hanging.

Randy Orton didn’t hit the ring until well after Riddle was embarrassed and defeated by Omos. With friends like Orton, who needs enemies?

The way that “murder” has been such a focal point of this feud between Bobby Lashley and Goldberg, I’m just glad it isn’t a stipulation in this match.

Bobby Lashley cut a very good promo as he continues to grow as a character who suddenly doesn’t seem to need a mouthpiece.

This match was interrupted by the 24/7 division, and I could already hear the tweets complaining about them being anywhere near Jeff Hardy.

This crowd, which continues to get behind Jeff Hardy, was utterly shocked with Jeff Hardy losing to upstart Austin Theory. This tells me thy haven’t been paying attention to how Hardy has been booked recently.

It’s wild to think that this was a matchup between former WWE champions.

Jinder Mahal and Shanky were drafted to SmackDown, while Veer will remain on Raw, which I think bodes well for Veer.

Jinder Mahal stopped the heavily teased possibility of Kofi Kingston vs. Xavier Woods like the true heel he is.

Sasha Banks and Bianca Belair vs. Charlotte Flair and Becky Lynch Ends in a No Contest

This match started with a wild brawl between two teams where each tag team was brawling amongst themselves, and ended just as randomly as it started.

I could see WWE doing a Queen of England-type gimmick with Doudrop, even though she’s Irish.

Mustafa Ali either made a full heel turn by attacking Mansoor during a backstage segment, or was simply showing tough love.

Big E and Drew McIntyre vs. The Usos Ends in a No Contest

Big E tagged himself in right in the middle of Drew McIntyre’s “3…2…1” countdown, which is a textbook spot in a Babyface vs. Babyface feud.

This ended up degenerating into yet another match between top stars who couldn’t get along as tag team partners.

Big E took the Claymore Kick like a champ.