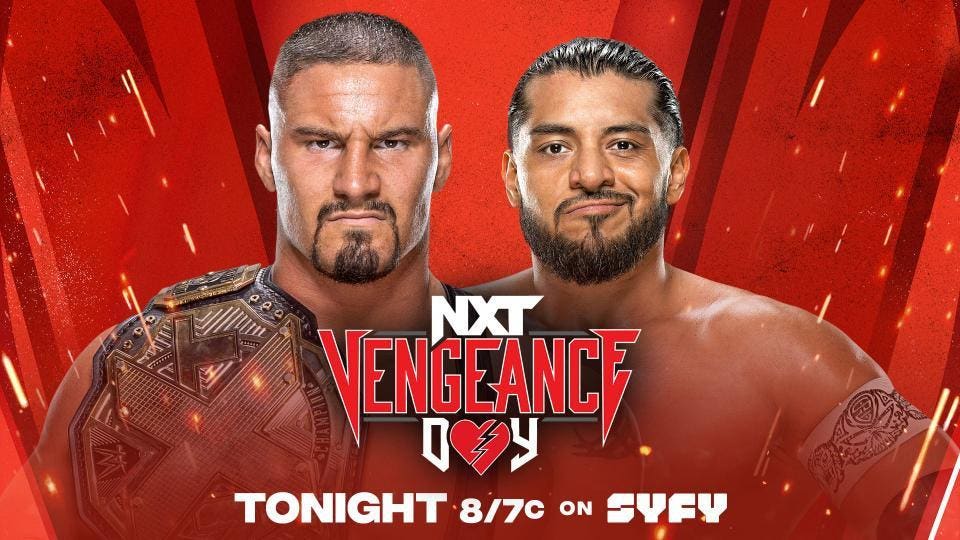 If NXT really wanted to be current and with the times, Tony D’Angelo would refer to Pete Dunne as “Skete” Dunne.

This match flew by as Dunne and D’Angelo made the most of weapons, the cage and Dunne’s submissions.

Pete Dunne managed to win this match with both his hands tied behind his back for much of it.

In the NXT universe, Persia Pirotta does not seem to know that there’s a picture of Duke Hudson and Indi Hartwell together at an event, even though the picture was in plain sight last week.

Unsurprisingly, Toxic Attraction won this match. Surprisingly, there was no miscue between Hartwell and Pirotta despite a potentially looming love triangle with Duke Hudson.

Between LA Knight borrowing his mannerisms and Grayson Waller using his finisher, both these gentlemen may have to adjust their gimmicks should Steve Austin return.

This segment had a fairly anticlimactic ending when LA Knight tore the contract up on a technicality (Australia has different restraining order rules), leading to the police walking out and LA Knight attacking Waller.

This was the first match on this show that actually felt like an NXT TakeOver-caliber match.

Carmelo Hayes has the best Chelsea boot collection in all of wrestling.

This crowd lost its mind during a nearfall for a crossbody from Cameron Grimes, which tells you how into this match they were.

Carmelo Hayes is developing into a great champion. With Bron Breakker still finding his footing as NXT world champion, the NXT North American Championship legit feels like the A Championship.

Malcolm Bivens had a John Cena-style towel that read “Never Give Up,” but in true Bivens fashion, the back of the towel read “Nah, You Should…”

The styles clash of this match was perfect with the smaller, high-flying MSK vs. the big-man tandem of The Creed Brothers. The Creed Brothers went over clean, as they should have, and NXT has established a new tag team in the Dusty Classic tournament.

Gunther received heat for correcting the ring announcer and saying his name is pronounced “Goon-ther!” That didn’t stop this crowd from chanting “Walter.”

I had no idea how excited I was to see Gunther vs. Solo Sikoa until he appeared in this segment.

Bron Breaker’s big entrance saw him light the V in Vengeance on fire as opposed to burning the old NXT logo to the ground.

This match was advertised as being commercial free, but the early goings of the match were so slow I felt like it could have been in a picture-in-picture.

I wasn’t even close to being convinced Santos Escobar could win until Dolph Ziggler ran in and hit a super kick on Breakker behind the referee’s back.

Some fans were booing Bron Breakker, but weren’t necessarily backing Escobar. It felt very much like a John Cena reaction.

Santos Escobar’s gear is always on point, but his long tights (reminiscent of Eddie Guerrero) are superior to his trunks.