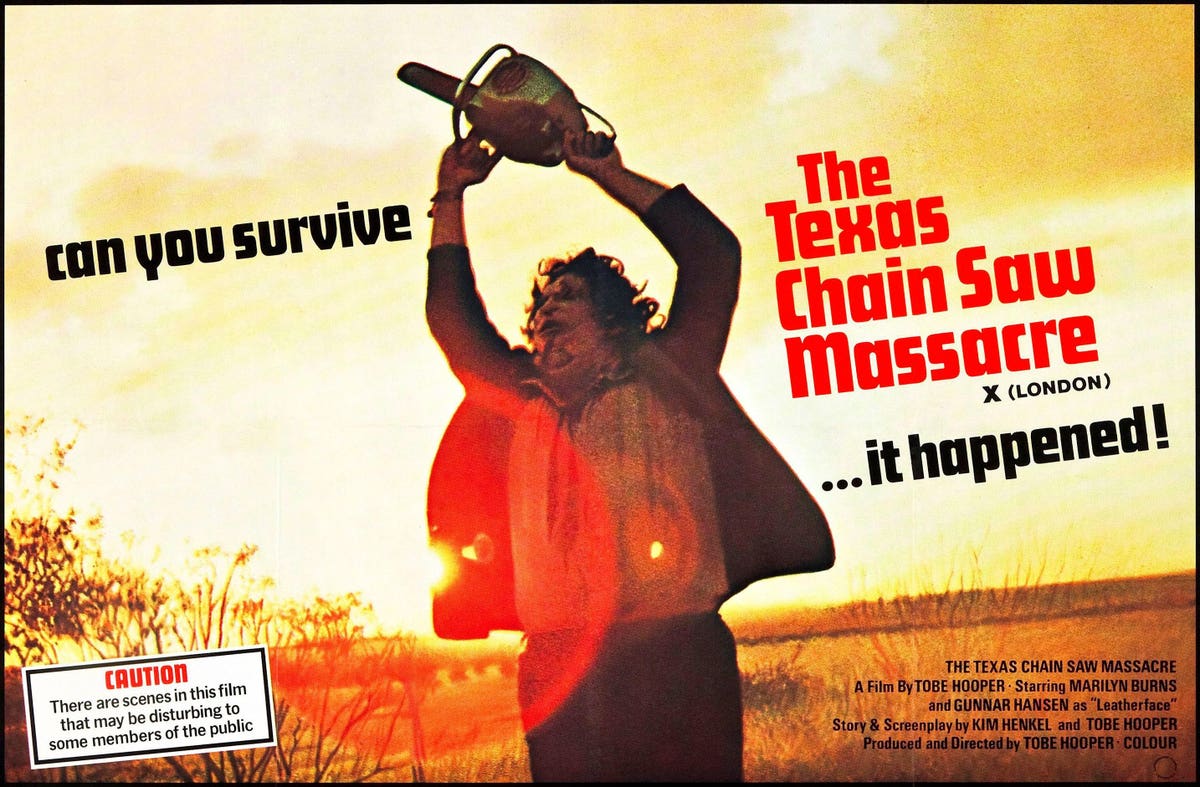 It’s another “IP for the sake of IP” acquisition and furthers the notion of Netflix as a “direct to video” bargain bin for studio rejects.

The irony is that this third “just a sequel to the first film” entry is arguably only in existence because the 2003 Platinum Dunes remake was a smash, earning $109 million worldwide (including $80 million domestic from a $29 million debut) in late 2003. The prequel, which I frankly like quite a bit (even if it makes the original film’s Vietnam-era subtext into sledgehammer-subtle text), opened in October 2006 and earned $51 million worldwide on a $16.5 million budget. That was an okay number, but it’s clear that, say it with me now, folks were only curious the first time. It’s a classic example of an IP that only survives because folks have heard of it, not because audiences want more or because the last several iterations have been remotely successful.

Tobe Hooper’s original The Texas Chain Saw Massacre is considered one of the definitive horror movies of the Vietnam-era “grindhouse” horror run. The film earned $26.5 million on a $140,000 budget and has a reputation for relentless intensity and gruesome violence despite most of its carnage happening just offscreen. Hooper’s own Texas Chainsaw Massacre 2, a half-sequel/half-spoof which nabbed an X rating for violence, earned a quasi-cult status, preceding Sam Raimi’s Evil Dead II (also an X-rated half-sequel/half-comedic remake of its predecessor) by a year. It also features Dennis Hopper in the lead role, arriving just weeks before the mid-September launch of David Lynch’s Blue Velvet, meaning the Easy Rider star (who hadn’t yet been pigeonholed as a bad guy) must have had an exciting Halloween back in 1986.

Anyway, the grotesque and farcical bloodbath grossed $8 million on a $4.7 million budget. And it was mostly downhill from there, as Leatherface: Texas Chainsaw Massacre III grossed just $5.7 million domestic in 1990. The mostly buried Texas Chainsaw: The Next Generation (featuring early turns from Rene Zellweger and Matthew McConaughey) earned $185,898 in 1995 and (after its two stars broke out elsewhere) in 1997. Skipping over the Marcus Nispel-directed remake and Jonathan Liebesman-directed prequel to that remake, Lionsgate released the pretty awful but weirdly fascinating Texas Chainsaw 3-D. The January 2013 release A) featured the 25-year-old Alexandra Daddario playing a 39-year-old and B) has a third-act turn which tries to turn Leatherface into a hero/figure of sympathy. Fast & Furious retconning the diabolical Shaw brothers have nothing on Texas Chainsaw 3-D.

The film, which was a 40-years-later sequel to the first film (see also: Blumhouse’s Halloween), opened with $22 million and ended with $34.5 million, making it one of the most frontloaded movies ever released in multiplexes. It grossed $47 million worldwide on a $20 million budget but was among the most frontloaded wide releases ever, earning $34 million domestic from a $22 million debut. Leatherface, a 2017 prequel to the 1974 flick, earned $1.5 million theatrically. The “not a remake” sequels (1986, 1990, 1995, 2013) and prequels (2017) have, save for the 3-D cash-in, otherwise stiffed. This new film was theoretically intended for theaters, and it was yet another “only a sequel to the first film” offering. That makes it the third “Texas Chainsaw Massacre part 2” since 1986.

Like a handful of other inexplicably ongoing franchises (Highlander comes to mind), the only one which most folks admit to liking is the first film. The eight (!!) Texas Chainsaw movies, including a 2003 remake and a 2006 prequel to that remake, have earned $247 million worldwide on a combined budget of (very roughly) $49.5 million. However, $109 million (44%) of that came from the 2003 Platinum Dunes remake, which was “new to you” for much of its younger ticket buyers. It’s not unlike the Alien series, where the only post-Aliens hits were the offshoot Alien Vs. Predator and the “not sold as an Alien prequel” Prometheus. Just because we’ve all heard of Texas Chainsaw Massacre and Leatherface is an iconic onscreen boogie man doesn’t mean the IP is of any value.

The franchise has been coasting on the reputation of its first installment for the last 30 years. The choice by Netflix to acquire what smells like damaged goods recalls not Legendary’s “was supposed to be in theaters” Enola Holmes but rather Paramount’s The Cloverfield Paradox. Produced by Fede Alvarez and directed by David Blue Garcia, it is another odd example of Netflix doing what its rivals now have to do to compete with the streaming giant. In this case, it’s a long-running horror franchise that’s never really been all that popular. Like last week’s He’s All That, it’s a clear “IP for the sake of IP” play that we usually see from the likes of Paramount+ (Grease: Rise of the Pink Ladies) or Peacock (the $400 million Exorcist trilogy). Netflix doesn’t need this nonsense.

So, The Texas Chain Saw Massacre has nine installments, including a remake, a prequel to that remake, a prequel to the 1974 flick, three separate and disconnected sequels to the 1974 flick (1986, 2013 and 2021) and a threequel and fourquel about which no one wants to talk. This Netflix-bound flick is yet another “only a sequel to the first film” offering. Even Halloween has only two “part two” in-continuity movies. Halloween H20 is technically a new “part three.” Rob Zombie’s Halloween II is from a separate continuity. I like the cast (Elsie Fisher, Jacob Latimore, etc.), but it’s another example of mistaking a “once was successful” singular horror hit for a viable IP. Moreover, if it’s lousy, well, Netflix once again gets dinged as the modern-day “direct to Blockbuster.”