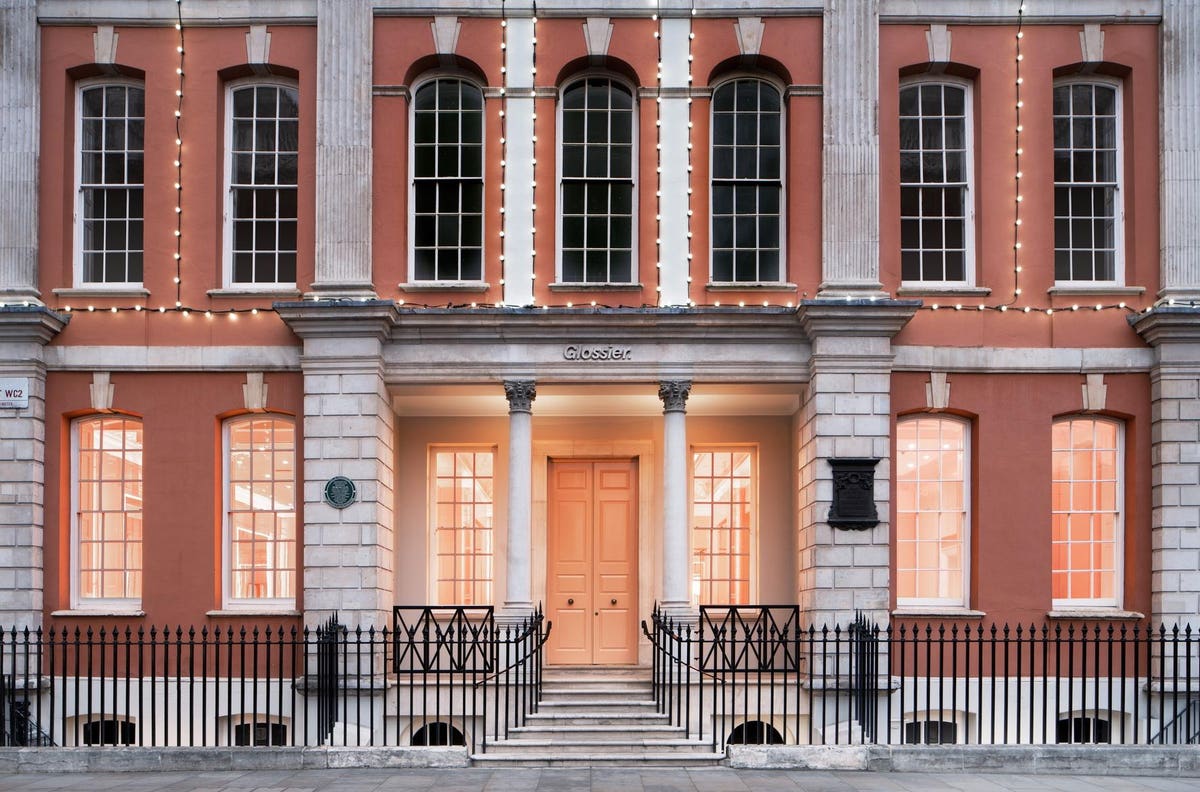 Yesterday, Glossier opened its third permanent store located at 43 King St in the heart of London’s Covent Garden. It sits in the footpath of shoppers, restaurant-goers, and Christmas tree viewers just in time for the holidays.

The company received an estimated valuation of $1.8 billion after its $80 million Series E in July of this year, having raised a total of approximately $266 million. Although physical locations have not been a central focus for the brand historically, the Founder and CEO, Emily Weiss, shared a blog post this summer outlining plans “to exist again in 3D.”

This store isn’t Glossier’s first rodeo with retail in London. It had an eight-day pop-up in Marylebone in 2017 and a yearlong pop-up in Covent Garden in late 2019, and as stated in Weiss’ post, it was their “most successful temporary store of all time.” A clear indicator of the success a permanent store could have.

Like many Glossier store designs and the latest stores by numerous DTC brands, the new location goes beyond the transaction and focuses on the brand experience. “They come to immerse themselves in our brand, explore our curated portfolio of products, and gather and connect with others,” Kristy Maynes, Glossier’s Senior Vice President of Retail, told Forbes.

The decision to go to London in the first place stemmed from the brand’s growing demand in the U.K. “The U.K. is our second-largest market outside of the U.S., and so building a permanent store there was a natural progression as we looked to expand our physical presence,” shared Maynes.

That said, for a brand that originated in the U.S., it may seem odd that its third store, after Seattle and L.A. earlier this year, would be outside the country. There are many large U.S. markets Glossier could tap first. So, why do it?

Before the pandemic, it had several stores, including New York City, Los Angeles, Seattle, and Boston (the latter two being pop-ups). And it made the decision to permanently close and start from scratch. Beyond the handful of permanent stores that previously existed, Glossier’s retail strategy has primarily consisted of pop-ups, where stores open in new cities for a short time. This tactic can be costly, given the capital commitment and higher rents in the short term. It’s a strategy that lends itself as a powerful marketing play but financially usually has a poor payback on a four-wall basis. That said, it can boost online sales, making up for any potential downside in cost. And even more importantly, pop-ups allow a brand to test a market and learn what experiences their consumers want. And that’s what happened with Glossier.

“We are committed to bringing Glossier to our community, and we’re very fortunate that there is growing demand from consumers all over the world—our international community has nearly doubled in member size since the opening of our last London pop-up in 2019,” stated Maynes. The introduction of pop-ups to London served as an opportunity for the brand to build a significant customer base, enough to justify the investment of a long-term location.

Glossier is far from the first DTC brand to endeavor into London in its early stages of retail expansion. Allbirds, with 33 locations, also opened its third permanent location in London in 2018. It’s since opened more international stores in six other markets and another in London. With now 13 locations, Away also opened its first global store in London in 2018. Whether the U.K.-based customers existed previously or brands acquired them because of the physical location, it adds to revenue and growth. In addition, the presence in the U.K. acts as a gateway to greater Europe, with London and Covent Garden, in particular, being a prominent tourist destination.

More and more DTC brands are finding themselves abroad as the demand for brands becomes more extensive internationally. Despite the complexity of exploring outside U.S. borders, it seems testing locations with pop-ups is a reliable way to verify the success of the investment. Glossier shared that it has plans to expand its store count, including more international destinations. Although it did not provide details, it’s probably safe to assume pop-ups will continue to be part of its testing strategy, and there will be a lot more permanent stores that follow.