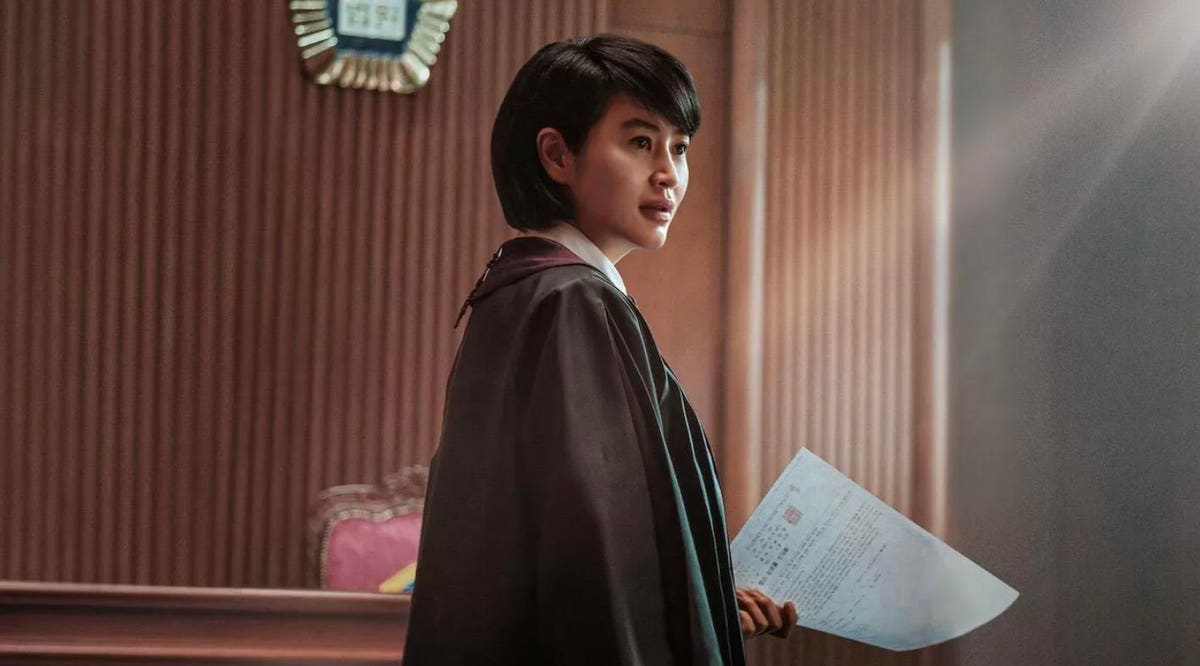 The start of 2022 finds dozens of interesting Korean dramas in varied stages of planning and production. A few dramas on the slate were originally scheduled for 2021 and postponed. Future air dates may also face delays or cancellation. Still, there are plenty of fun plots, star-studded casts and star comebacks for viewers to look forward to. Here are a few on the roster.

Kim Hye-soo played a brash lawyer in Hyena and in Juvenile Justice it’s her turn to sit on the bench. In this drama she plays a newly appointed judge to the juvenile court, but the judge has little compassion for juvenile offenders. She was once a victim of a juvenile crime and it’s a prejudice she must overcome to truly deliver justice. The drama also stars Kim Mu-yeol, Lee Sung-min, Lee Jung-eun and Park Jong-hwan

This fantasy medical drama stars Rain and Kim Bum as two doctors who end up combining bodies and spirits. Do the very different doctors have anything to learn from each other or will it be a disaster? Apink’s Son Na-eun plays an emergency room intern and Uee will play a neurosurgeon who happens to be the ex-girlfriend of Rain’s character. The drama airs January 3.

Tracer is a drama about Korea’s National Tax Service, starring Son Hyun Jo. Go Ah-sung and Im Si-wan. This team works hard to find the money hidden from the tax service, but some team members are more ambitious than others. The drama is set to air on January 7.

Those Who Read Hearts of Evil/Through The Darkness

This SBS drama tells the story of Korea’s first criminal profiler and the difficulties he experiences when trying to connect with the minds of serial killers. Kim Nam-gil plays the profiler who details his fear of exploring that very dark place. The drama also stars Jin Sun-kyu and Kim So-min. The air date is January 14.

Crazy Love stars Kim Jae-wook and Krystal Jung. Kim plays a man, who pretends to have amnesia when his life is in danger. Jung plays a woman who pretends to be his fiancee when she finds out she doesn’t have long to live.

This 12-episode JTBC drama follows three friends who are about to turn 40. Son Ye-Jin plays a dermatologist with her own clinic in Seoul, while Jeon Mi-Do works as an acting coach.

So Ji-sub plays a surgeon who unfairly loses his license after patient dies, so he becomes a lawyer, specializing in medical litigation. As well as helping clients with medical issues, he seeks the truth behind the death of his former patient. The cast also includes Shin Sung-rok and Im Soo-hyang

This drama is a story about second chances. Lee Joon-gi is an enthusiastic prosecutor who is killed while investigating corruption, but he surprisingly gets another chance to pursue justice. The drama also stars Kim Jae-kyung, as a reporter, who helps him track down a murderer.

This mystery comedy wins the most fun premise, as Seo In-guk plays a police profiler who becomes a shaman. The drama also stars Oh Yeon-seo as the team leader of a  violent crimes division, as well as Kwak Si-yang, Kang Mina, and Kwon Soo-hyun

All of Us Are Dead

Zombies get around and in this drama they trap a group of high school students. If you yearn for a coming-of-age story set during a zombie outbreak, this drama is for you.  It stars Yoon Chan-young of Do You Like Brahms? and Cho Yi-hyun of Hospital Playlist and School 2021.

This tvN comedy-mystery-thriller stars Lee Kwang-soo, Seolhyun, and Jin Hee-kyung The story takes place in an ordinary neighborhood on the outskirts of Seoul. At a crime scene, a supermarket receipt becomes a key piece of evidence.

Eat and Love to Kill

Eun Kye-hoon, played by Yeo Jin-goo, works as a chef, who decides to open a restaurant on the spot where his twin sister disappeared 20 years ago. One day he mysteriously begins to feel the emotions of No Da-hyun, played by Moon Ga-young. She’s a woman who has not been lucky in life.

Lee Da-hee plays a selfish and spoiled heiress, who is banished to Jeju Island as punishment. While working there as a teacher, she discovers evil forces and joins with Kim Nam-gil, Cha Eun-woo and Sung Joon to battle those forces.

Choi Joon-woong, played by SF9’s Rowoon, is having a hard time finding a job, despite his great qualifications. Then he meets an angel of death, played by Kim Hee-seon. The angel is assigned to a crisis management team, which tries to save suicidal people. He’s recruited. It’s the perfect job for him.

A lot can happen in four years. Twenty-Five Twenty-One is about two people, played by Kim Tae-ri and Nam Joo-hyuk,  who meet when they are 18 and again at 22. Their circumstances have changed dramatically by the time of their reunion.

In this sageuk, Lee Joon plays a man whose father becomes the king of a new dynasty. His desire to rule as an absolute monarch places him in a power struggle with his vice-premier. Kang Han-na plays the daughter of a noble family involved in the power struggle.

Romantic comedy queen Park Min-young and rising star Song Kang have signed on to this workplace drama, about people who work at a weather forecast service. With an office romance, things could get stormy. The drama also stars Yura and Yoon Park.

Hwang In-yeop plays the leading man in this romantic comedy, also starring Seo Hyun-jin. She’s a talented lawyer who is demoted and winds up teaching law. Hwang plays one of her students. The drama also stars Heo Jun-ho as a corporate CEO.

Carter is about a Korean agent who has memory loss. He must investigate a mysterious virus spreading through the Korean Peninsula. The cast includes Joo Won and Lee Sung-jae.

Queen of the Scene

Gong Hyo-jin plays Kim Ma-ri, a famous drama writer, known for her interesting plot twists. One day she is trapped inside one of her stories and can’t return to the real world. The drama also stars Park Ha-sun.

The Sound of Magic

A student, played by Choi Sung-eun, supports herself and her younger sister. She balances work and studies. but is eager to grow up so and find a stable job. She reveals her dream to the magician, played by Ji Chang-wook, and her life begins to change. The cast also stars Hwang In-yeop, Nam Da-reum, and Hong Seo-hee

Hunting Dogs marks Woo Do-hwan’s return to the small screen after finishing his military service. Woo plays a promising boxer whose mother is in debt to a loan shark. To pay off her debt, he begins working for a CEO, played by Heo Jun-ho. The drama also stars Kim Sae-ron and Lee Sang-yi.

Lee Jong-suk also returns to the small screen after his military service with this story about a talkative third-rate lawyer. His lawyer character gets involved in a murder case connected to a conspiracy involving the rich and powerful. The drama also stars Yoona, Kwak Dong-yeon, Kim Joo-heon, Ok Ja-yeon and Yang Kyung-won

Kang Ha-neul plays a careful judicial trainee whose life is turned upside down while he’s working undercover for an investigation. His honest investigation lands him in jail. The drama also stars Lee You-young and Kim Sang-ho.

Shin Ha-kyun, who won a Baeksang Arts Award last year for his role in Beyond Evil, stars in this drama that’s set in the 2030s. Shin’s character is mourning the death of his wife when he receives a message that he can reunite with her in virtual reality. Han Ji-min plays his wife and the drama also stars Lee Jung-eun and Jung Jin-young

Kang Daniel stars in this Disney+ Korean original. He plays a top-ranking freshman at the police university. Chae Soo-bin plays his classmate, a woman who entered the university to follow a crush. The drama also stars Lee Shin-young, Park Yoo-na and Kim Sang-ho

Seo Kang-joon stars in the Disney+ original drama Grid about a mysterious being who saved mankind from a crisis in 1997, then disappeared. The mysterious being returns in the present to help a serial killer escape. But why? The drama also stars Kim Ah-joong and Lee Si-young.

Our Blues features a bevy of stars, configured into couples, including real-life couple, Kim Woo-bin and Shin Min-a. The story is set on Jeju Island. Lee Byung-hun plays a truck driver who meets a mysterious woman played by Shin. Cha Seung-won plays a man who moves back to the island and meets his first love played by Lee Jung-Eun. Her friend is a character played by Uhm Jung-hwa. Han Ji-min’s character moves to Jeju and meets Kim Woo-bin’s character, a ship’s captain.

The Korean remake will follow the same storyline and characters found in the highly successful series Money Heist. The series will star Yoo Ji-tae, Park Hae-soo and Jeon Jong-seo. Yoo plays a professor who dreams up an ambitious heist and recruits members. The plan is perfect until it isn’t.

Ha Jung-woo plays a businessman in the South American country of Suriname. His cooperation is requested by the South Korean NIS as they seek to catch a drug smuggler played by Hwang Jung-min. The screenplay is based on a true story. It also stars Yoo Yeon-seok and Jo Woo-jin.

The Chaebol’s Youngest Son has a fantasy twist, with Song Joong-ki playing a man who is killed and then finds himself in the body of the youngest son of the corrupt conglomerate he served. He decides to take revenge. Shin Hyun-bin plays a female prosecutor following the illegal succession of the chaebol family.