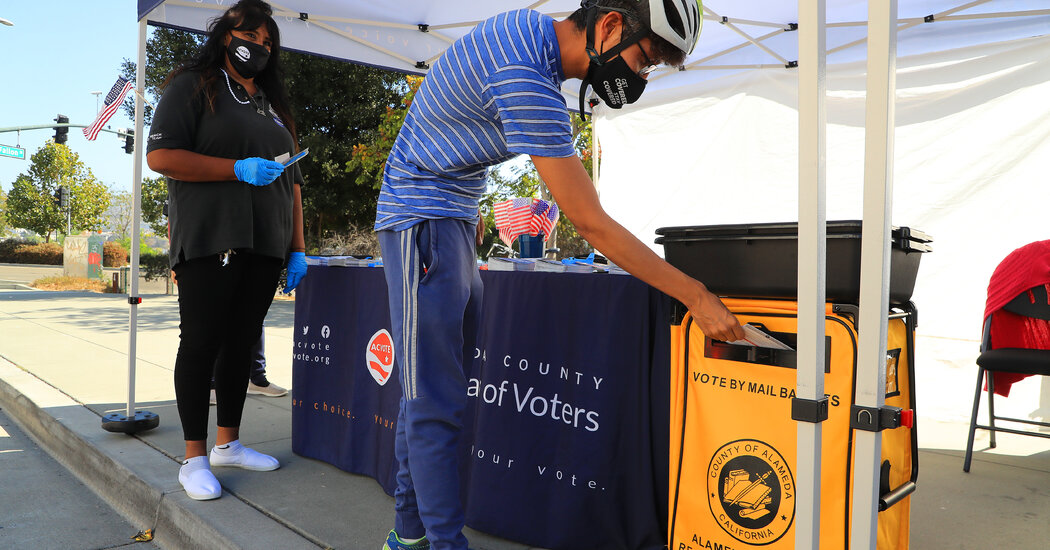 Californians have been voting early for weeks in the election to recall Gov. Gavin Newsom. But it is unclear how long it will take to get a definitive answer on whether he will keep his job.

Depending on the number of early ballots and the amount of in-person voting on Tuesday, the math could be clear within a few hours of when the polls close at 8 p.m. Pacific time, election experts say. But if the race is tighter than expected, weeks could pass while the counting drags on.

Recall attempts are a fact of political life for governors of California. But they do not usually make it onto the ballot, and Californians have gone to the polls only one other time to determine whether the state’s top officeholder should be ousted. That was in 2003, when Gov. Gray Davis was recalled and replaced by Arnold Schwarzenegger. Since then, the state’s voting rules and electorate have changed substantially.

Because of the safety concerns arising from the coronavirus pandemic, ballots were mailed early to all of the state’s 22 million or so registered and active voters in the 2020 election. Voters can return their completed ballots by mail, deposit them in secure drop boxes, vote early in person or vote at a polling place on Tuesday.

Nearly 40 percent of registered voters have already cast ballots, but many Republicans have indicated that they plan to vote in person, citing — without evidence — a concern that election officials in the Democrat-dominated state will tamper with their ballots. Studies after the 2020 election found that the system had worked smoothly, with no systemic voter fraud.

Early Democratic ballots have outnumbered Republican ones by two to one, with overwhelming majorities of voters in both parties telling pollsters they plan to vote along party lines. Mr. Newsom is a Democrat, as is about 46 percent of the electorate.

But that margin is expected to tighten as Republican voters — who represent fewer than a quarter of registered voters — head to the polls.

Vote counts are notoriously slow in California because the state is so massive. The law for this election allows county officials to open and process early ballots as they come in, but those results cannot be shared with the public until the polls close, said Jenna Dresner, a spokeswoman for the California secretary of state’s office.

California has 58 counties, and each processes its ballots differently. Results often land later in larger counties, such as Los Angeles County. Officials have 30 days to complete their official canvass and must give vote-by-mail ballots postmarked on Election Day a week to arrive. The certified count is not expected until Oct. 22.

Significant partial counts should be available within a couple of hours after polls close in some key areas, such as the Bay Area and Orange County. And the electoral math in California should offer some strong clues about the outcome, said Paul Mitchell, a vice president of Political Data Inc., a nonpartisan supplier of election data.

Because so many voters are Democrats, he said, the higher the turnout, the better Mr. Newsom’s chances are of beating the recall. If the overall turnout hits 60 percent, he said, the proposed ouster of Mr. Newsom is almost mathematically impossible.