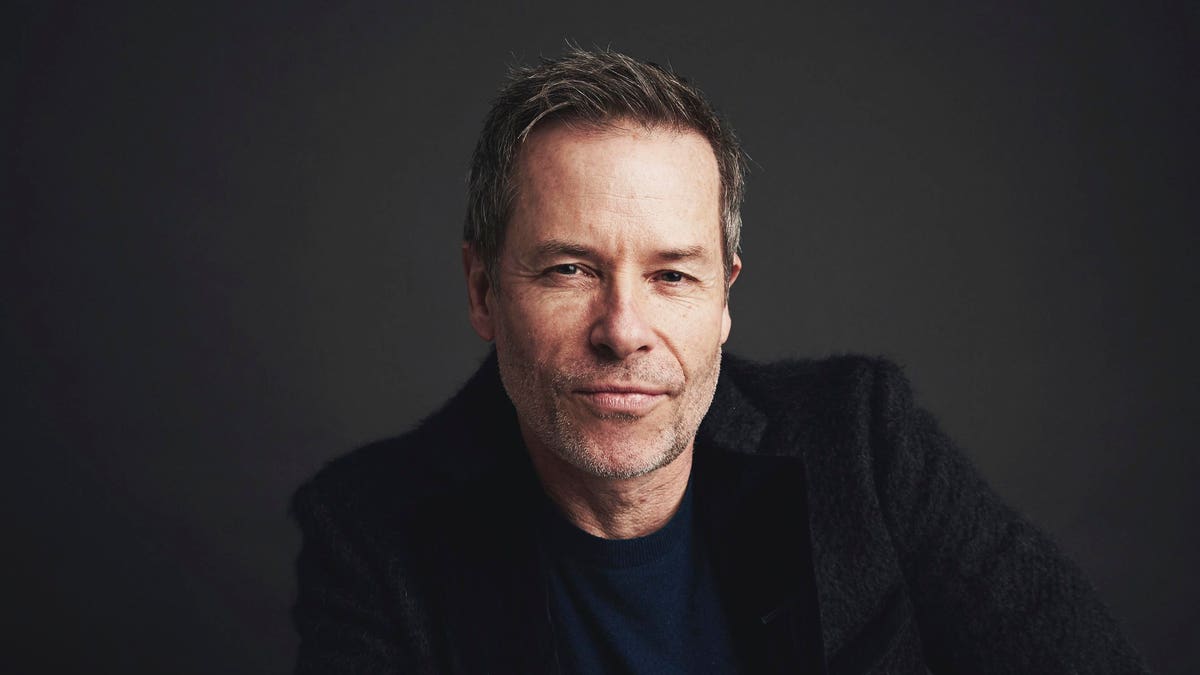 Guy Pearce loves a challenge, so the idea of headlining an R-rated sci-fi thriller that involves turning parking lots and industrial buildings in Belfast, Northern Ireland, into a convincing futuristic dystopia ticked that box.

Pearce plays a private investigator hired by a wealthy and eccentric businessman to find his missing daughter, believed to be in the sordid world of the titular Zone 414.

I caught up with the actor to discuss the movie, his interest in a Lockdown sequel, and the Emmy-nominated Mare of Easttown.

Simon Thompson: Zone 414 is a genre movie, and I could feel many of the influences. Instead of me telling you what I thought they were, can you tell me what the ones you took with you into this were?

Guy Pearce: I probably didn’t have any, to be honest. For me, I am purely looking from the inside of the character out. When I sign up for a film and start to talk to the director, when I begin to see what the art department is doing and see the props and the sets, I get a sense of what the world will be like. Andrew Baird, the director, didn’t sit me down and say, ‘Okay, so Blade Runner is what we’re going for here.’ I would rather not know any of that stuff. Once I feel like we’re plagiarizing or borrowing from stuff, it’s not helpful. I love the feeling of reading a script and just being entirely taken by whatever the emotional trajectory might be, or the journey that a character is on, or the outlook that they have that I haven’t played or experienced before.

Thompson: When you watch the finished film, did you get Blade Runner vibes? I felt like there was a bit of Dirty Harry in there too.

Pearce: I’m much more interested when I’m watching it back and thinking, ‘Did that scene work? Did that line work? Has that come across the way I wanted it to?’ I’m much more analytical about what we are doing than over references to, or influences of, other stuff. Maybe to my detriment, I remember when I did Lockout, and the general criticism was that it was a total rip-off of Escape from New York. When people said that, I was like, ‘Wow, I don’t even know if I saw Escape from New York.’ More fool me for not having picked up on that. I looked at that as a really fun role. What the character had to go through was exciting and was a great change for me. Outsiders just looked at it and went, ‘Wait a minute.’ I’m also quite taken by music in films and what that does. I saw a rough cut of Zone 414 about six or eight months ago, and I was getting a sense of how it was working, the pace, whether the scenes between each of us were working, and there was temporary music in there. When I saw the finished film, I was really moved by it because the icy and strange, sterile nature, which is wonderful, was underpinned by the music. There’s a really emotional undercurrent. The film is about emotions, latching onto or repressing them, and how we handle them. I was really pleased with that. I’m thinking more about that, and I am going, ‘Oh yeah, Blade Runner.’ (Laughs)

Pearce: (Laughs) In December, too. It’s funny because, especially in this day and age, you rely a lot on post-production. On set, they’ll say, ‘This is the doorway. You’re driving in here. That’s Belfast in the background or an empty space, but we’re going to paint in an entire city,’ and all you can do is say, ‘Well, okay.’ Of course, I watch the finished movie and go, ‘Oh, s**t! It worked. Fantastic.’ It’s always amazing to film in real locations, in actual buildings. If you’re doing a period piece and filming in stately homes in the UK, there are the grounds, the rolling hills, and the beautiful 14th-century turrets. No question, it’s easier. It’s perhaps not easier, but it’s just not something you have to think about on set. A lot of it comes down to budgets and what people can afford.

Thompson: That must happen a lot these days.

Pearce: Funnily enough, I’ve just done two films, one called The Infernal Machine, which is set in Southern California, on the border of Mexico, and the film I did before that was with Liam Neeson was called Memory and set on the Mexican border, but in El Paso, Texas. So I’ve just done these two films set on the Mexican border, but Memory was filmed in Bulgaria, and The Infernal Machine was filmed in Portugal. With both of those jobs, you’re going, ‘Okay, so how’s that going to work? What are they going to do to make this look like we’re really where we’re supposed to be?’ Day by day, you see what the art department has done, you see they’re avoiding shooting certain things, and they’re going to paint something out. You watch the finished product and go, ‘Yeah, it works.’ The giveaway with stuff like that is when audiences watch the credits, and as they roll up, they thank Bulgaria and the Bulgarian crew, and people realize, ‘Aha! So they didn’t shoot it on the Mexican border at all.’

Thompson: You mentioned Lockout earlier. It’s one of your movies that I love, and it’s about to celebrate its tenth anniversary. Have you ever thought of revisiting that character, Snow, and doing a TV show or as a sequel? Has that ever been discussed?

Pearce: Because I love that movie. I’ve never discussed that with anyone, but people who liked Lockout have brought it up with me. They’ve often said, ‘Oh, man, I love that character. You know, you should do more of that stuff.’ I’ve done some things where I played the character a couple of times, but generally, everything I do is something I do just once. I think there’s something about him that people love just because he’s laconic, he’s a tough guy, he’s got that kooky sense of humor. People have quite liked him over the years. I’d be curious about it, absolutely. I’d have to get really fit again, though. I was super fit during that film. It was a lot easier to jump off buildings and punch the hell out of people in my early 40s than it is in my early 50s.

Thompson: This year, Mare of Easttown got a lot of attention from audiences and secured 16 Emmy nominations. I am not going to lie, but as soon as your character, Richard, turned up, I thought he was the killer. Was that your assumption from the get-go?

Pearce: (Laughs) I didn’t think that, but that is only because Kate Winslet told me that I wasn’t when she first called me about it. They did have another actor for the role at first. They’d been filming for a while, and a few things went wrong, so they stopped, and then they reignited things and brought me in. Basically, Kate rang me and said, ‘You have to come and do this job.’ But you are right because every friend of mine who watched it said, ‘Well, clearly you’re the killer. I mean, there’s no question. Why else would you be there? Obviously, your character did it.’ (Laughs) It was interesting to have everybody have that reaction. For me, it was just about getting to work with Kate again, plus it was a great script. I loved it. I’m just slightly beyond a cameo, but it was an interesting shoot for me. They’d been filming since November of 2019. My first day was March 12, 2020, and then we shut down that night because of COVID, and we didn’t go back until September or October to carry on with what I had to shoot. I only did seven days of filming in total, so it was a pretty brief job for me, but it was spread out over six months.