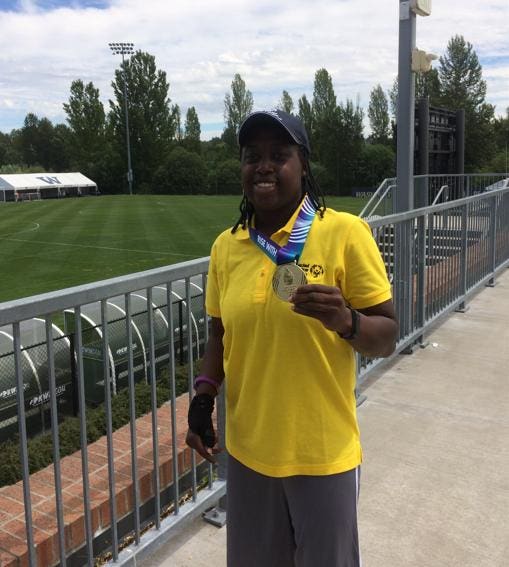 Novie Craven has been a podcast host and Special Olympics Athlete in Washington DC for over ten years. She also happens to have cerebral palsy on her right side, but she doesn’t let anything stop her. Novie’s current mission is to inspire people of all abilities and lead the way in advocating for inclusive health through her confidence and healthy lifestyle.

“I was born in 1989 at Howard University Hospital,” said Novie. “I was extremely premature and drug-exposed. The hospital said my right side was hemiplegic, and I have Cerebral Palsy. My birth mother then abandoned me at the hospital. I had to stay in the hospital for 22 months. My mom met me there while volunteering and fell in love with me. She applied to foster and adopted me.”

Novie has been a Special Olympics athlete for more than ten years and currently works for Special Olympics. She is a Bocce gold medalist who represented D.C. in the Seattle Special Olympic games and is the co-creator and host of the Inclusion Revolution Radio podcast.

“I was able to represent SODC at USA games in Seattle, WA in 20018 and won a gold medal in bocce ball,” Novie said. “My job at Special Olympics International is to work as a coordinator on the Marketing Development Team. This year, I have helped start a podcast, “Inclusion Revolution Radio,” hosting weekly podcast episodes. I love to help other colleagues when they need assistance with projects. I learned more about Special Olympics and how and why Ms. Shriver started Special Olympics through this podcast. In addition, I love to talk to other athletes about their involvement in Special Olympics and hear what great experiences they have had through Special Olympics.

The Path To The Special Olympics

Founded by Eunice Kennedy, the Special Olympics is a global movement of people creating a new world of inclusion and community. They are committed to making every person feel accepted and welcomed, regardless of ability or disability.

“All of the volunteers and unified partners were so kind and helpful,” said Novie. “Many of them work for Special Olympics International. They know I loved being part of Special Olympics and saw how I tried to help others get involved with Special Olympics. They suggested I might like to work at the Special Olympics office in downtown D.C. since I live in the area.”

Currently, Novie is a Coordinator for the Marketing and Development team at Special Olympics International.

Novie was honored to become the Inclusion Revolution Radio podcast host this past year.

“We started in June 2021 when my colleague came to me with the idea to start a podcast,” she explained. “As the host, I interview athletes, partners, and celebrity supporters from around the world and ask them questions about their involvement with Special Olympics. In addition, I interview athletes, partners, and supporters worldwide and ask them about their involvement with Special Olympics. The goal is to educate the world about our mission of inclusion at the Special Olympics. The mission is to be able to do the podcast.”

Words of Advice and Insight

When asked what words of advice she has for those with a disability that may be interested in getting involved with sports, she answered, “I have played sports my whole life. But, sometimes, it was difficult because of my disabilities. Some people excluded me from different sports. But, the Special Olympics is a place where all people are included. Through Special Olympics, I have learned to play so many new sports like golf, Bocce, and volleyball. I love that Special Olympics accepts people of all ages and has young athlete’s programs, high school, and adult unified programs, and people of all abilities are included.”

Novie also has a message for the public regarding those with disabilities. She said, “I would like to tell people that even when others have an intellectual or physical disability, they can succeed and should not be excluded.”