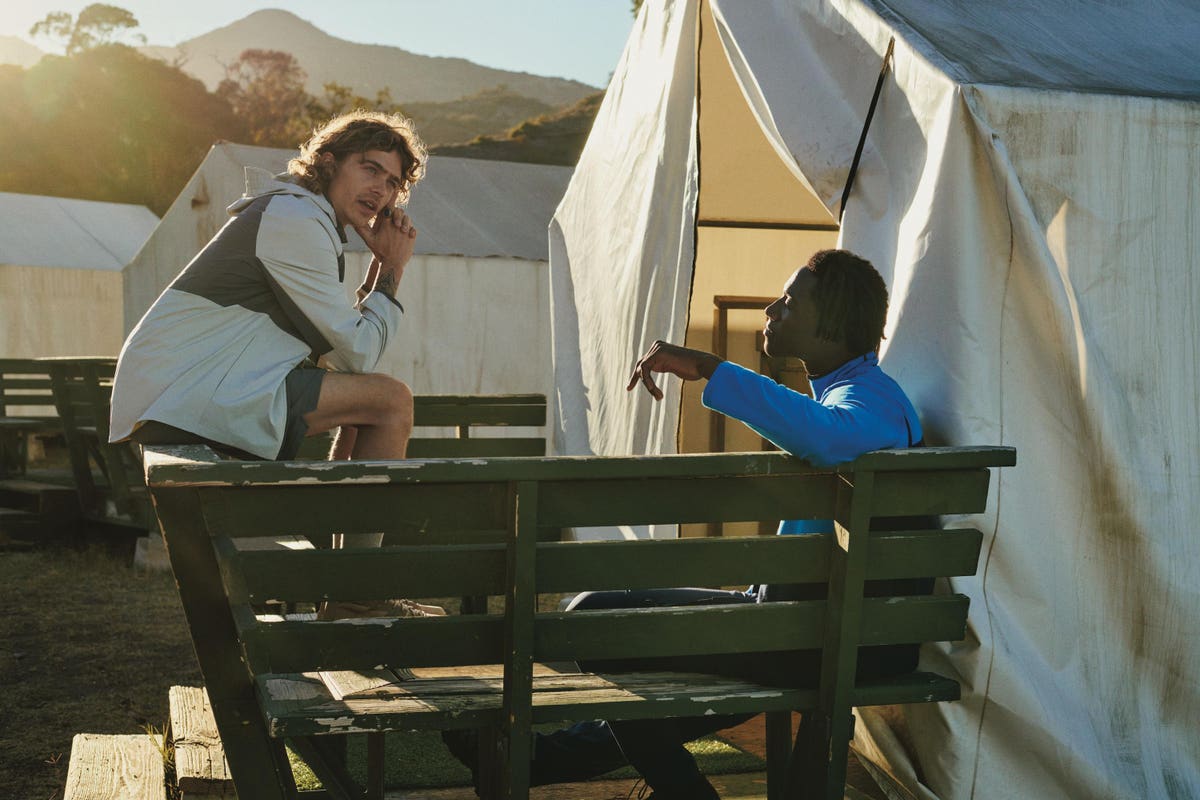 The Bonobos bros are adding duds for little bros. In the first brand extension since its founding in 2007, the Fielder collection is officially launching as a new product division for the Walmart-owned, DTC-founded men’s wardrobe brand based on colorful khakis. According to David Meir Sasson, Chief Operating Officer of Bonobos, the new Fielder active lifestyle is aimed squarely at Gen Z.

Targeted as a men’s casual clothing line aimed at 18–34-year-olds, Fielder is a line of colorful hoodies, T-shirts, shorts, and sweatpants aimed at ‘self-expression’ according to the COO. (The brand makes its interpretation of Gen Z; researchers classify Gen Z as those aged approximately 10 to 25 years of age and Millennials between 25 and 40 currently.)

Sasson describes the line as ‘street-leisure,’ a mix of athleisure, Gorpcore, and streetwear. The line is designed to be more aesthetically fashion-forward, with plenty of details. Targeting a younger customer meant more comfortable prices. Prices start at $14 for a BCI cotton T-shirt and $40 for a packable nylon windbreaker.

Unique to Fielder distribution for the new collection will be in over 250 select Walmart stores as part of the retail giants elevated brands group that includes Brandon Maxwell’s Free Assembly collection of heritage sportswear, Scoop, a trend-focused collection born out of the upscale boutique chain and Eloquii, a plus-size fashion line.

Additionally, the pieces will be available on Bonobos.com and Walmart.com. Currently, there is no plan to create a separate website for Fielder. “Bonobos and Fielder share the same ethos in terms of their values; it’s an extension of Bonobos on the website but as a separate section,” explains Sasson adding, “The Fielder customer is more youthful and adventuresome but still shares the same values as Bonobos.”

Adam Serrano, Senior Merchant at Bonobos, named color as a vital part of the DNA for the collection of quick-dry tees, water-repellant fleeces, zip-off pant bottoms, and packable jackets that prepare you for exploration. “The colors are part of the great escape in thinking about life post-pandemic,” he says. “Fielder can co-exist with Bonobos, and those customers can grow into becoming a Bonobos customer,” he said of the strategy.

From a fit and sizing aspect perspective, the brand aligns with Bonobos. The range is alpha sizing from XS to triple XXXL, a core aspect of the range. Unlike Bonobos stores which function as showrooms to discover the correct size and fit of their pants and suits and then place an order online, Fielder’s fit is more self-explanatory and easier to fit.

There isn’t a considerable sustainability message with the new extension, but a conscious choice for fabrics like BCI cotton is emphasized. Production naturally is offshore in several countries. For example, a sample garment label reads Made in Jordan, but Serrano said that might be misleading owing to manufacturers could have multiple factories in different countries. An example of the challenge the newly proposed Transparency Act legislation in New York State will cause brands like Bonobos if passed into law.

The concept will add a shot of whimsy and art each season by collaborating with an independent artist every six months to interpret the brand. Mike Perry, the Brooklyn-based American artist who gained notoriety for his cartoon-like psychedelic-inspired paintings through the television series Broad City is the first artist in the series.

“The cool thing about his art is that it worked well with our first concept, “The Great Escape.” It’s this kind of surreal escapism and reaction to the confines of the last two years. It was a collaborative partnership, and we love how he puts the characters in a cool non-conspicuous placement.

Launching today will be a 360-marketing campaign across all media on Bonobos.com and Walmart.com. The brand will announce an ambassador in the fall to be announced at a later date.