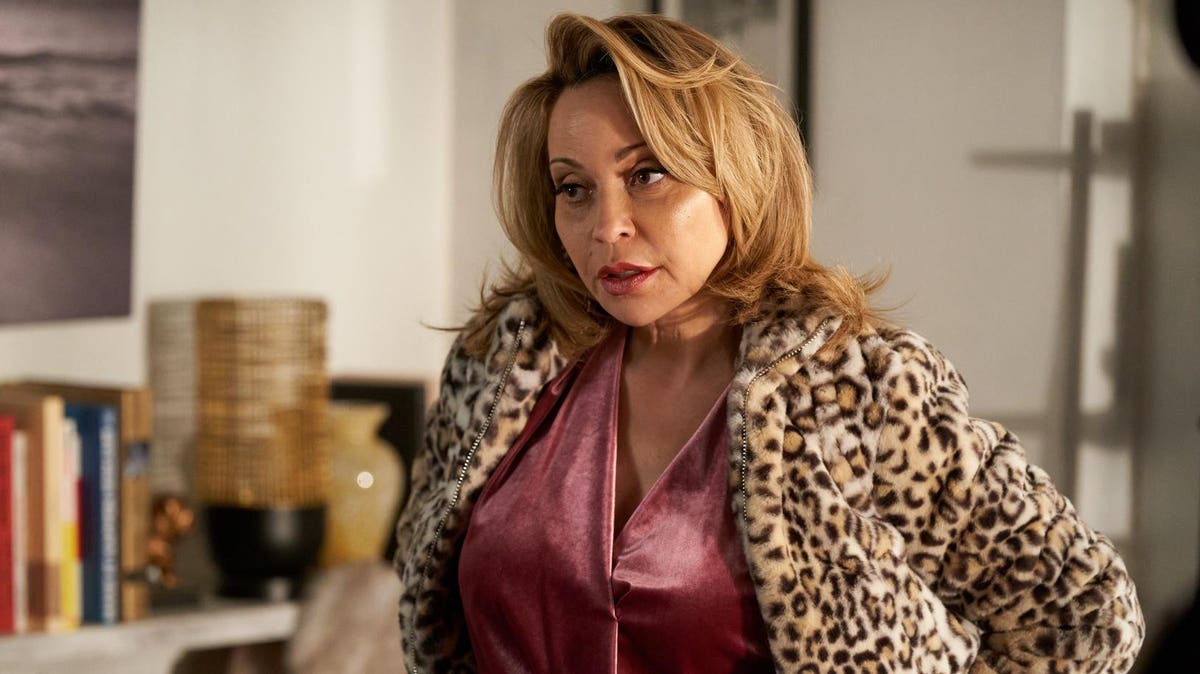 Tara Strong is the voice of your childhood. It’s simply a fact that isn’t up for much debate. Over the last three decades, the Toronto native has become synonymous with the world of animation via her portrayals of beloved characters like Timmy Turner (The FairlyOdd Parents), Bubbles (The PowerPuff Girls), Harley Quinn (Batman: The Animated Series), Raven (Teen Titans), and more recently, Miss Minutes (Loki).

But to exclusively refer to Ms. Strong as a “voiceover artist” would be doing her quite the disservice. She is an actor, first and foremost, always on the lookout for juicy roles in any medium that can help grow her craft and defy what the entertainment industry expects of her. This desire to break the typecasting mold is what drew her to the part of formidable drug kingpin Tiggy Sullivan on IMDb TV’s cop-based dramedy, Pretty Hard Cases (now streaming).

“Most of my on-camera work throughout my career has been ‘cute teacher’ on Big Time Rush or ‘cute mom’ on all these other shows. I love playing those roles, but the concept of having the depth of a character that’s so layered was fascinating — as well as the fact that it was so well-written. I was immediately intrigued,” Strong tells Forbes Entertainment during a Zoom interview. “I love this character so much. I say it’s like if Harley Quinn was a mom…that’s Tiggy Sullivan.”

While she has been acting since the age of 13, Strong constantly has to prove her range as a performer. “I knew it was a role that would really change me and my perception in the business of what I was capable of,” she explains. “I feel like Hollywood does put people in certain categories. ‘Oh, that’s the voiceover guy; that’s the commercial actor; that’s the soap guy.’ As well as to writers and directors. It’s not just an actor thing. So, to be able to play a role with this level of depth was very exciting to me.”

Of course, getting back into the realm of live-action is a bit like stretching an atrophied muscle. “In voiceover, you don’t have to memorize anything. Your script is right in front of you on the music stand. And on-camera, it was like, ‘Oh, I gotta get that training wheel off the bike and learn massive amounts of dialogue for these scenes.’”

“I don’t know that I’ve seen a show do that particularly with women in the driver’s seat and I think that’s what sets it apart from other shows,” Strong says. “Also, throughout the show, they’ve maintained brilliant writing. Every script, I would text them and go, ‘Oh my God, I love this episode!’”

Despite their vastly different approaches to police work, Samantha and Kelly must put aside their petty squabbles in order to take down the Stockwoods, a local gang that’s been peddling narcotics and wreaking general havoc on the community.

As the season unfolds, however, the two women come to find that they do have some common ground: loneliness, dysfunctional families, and screwed-up love lives. What’s more, they come to realize that their professional goals may not be in line with what they want in their personal lives.

“It’s all women who are the creators and writers and stars of this show. Mostly women who understand what it is like to be under the thumb of a misogynist,” Strong continues. “Particularly Tiggy, my character, when she arises, she is a phoenix. She’s like, ‘I don’t need a man to make this work.’ The undercurrent of the women taking their own power transcends through the screen for sure. It also is unafraid to go into subject matter that’s challenging.”

Pretty Hard Cases was shot in Canada last year at the onset of the COVID-19 pandemic. As such, testing, social distancing, and other health safety measures among the cast and crew were a regular occurrence. Instead of creating a sense of alienation and isolation, Strong asserts that the scariness and uncertainty of the global health crisis brought everyone closer together.

“With this show, everyone was masked,” she adds. “On my last day, I gave a speech to the crew, thanking them, and I’m like, ‘I love you all so much and I don’t know that I’d even recognize you in person.’ … I was like, ‘We’re connecting more on a spiritual feeling level rather than being able to see faces.’”

Production also took place during the worldwide movement against racism following the death of George Floyd at the hands of Minnesota police officers. According to strong, the show is “not afraid to attack those very challenging issues. There’s a lot of racial issues that are handled in a unique way between these two women.”

Overall, Strong can say with absolutely certainty that she had “no negative experiences from working on the show,” calling it “a total dream come true.” She concludes: “It is one of those shows that if you ever had to label something as a ‘dramedy,’ in my opinion, Pretty Hard Cases masterfully handles that. Where it’s very serious moments and situations and also very comedic scenes around those very serious moments.”

Karen Robinson, Dean McDermott, Al Mukadam, Percy Hynes White, and Katie Douglas round out the rest of the cast.