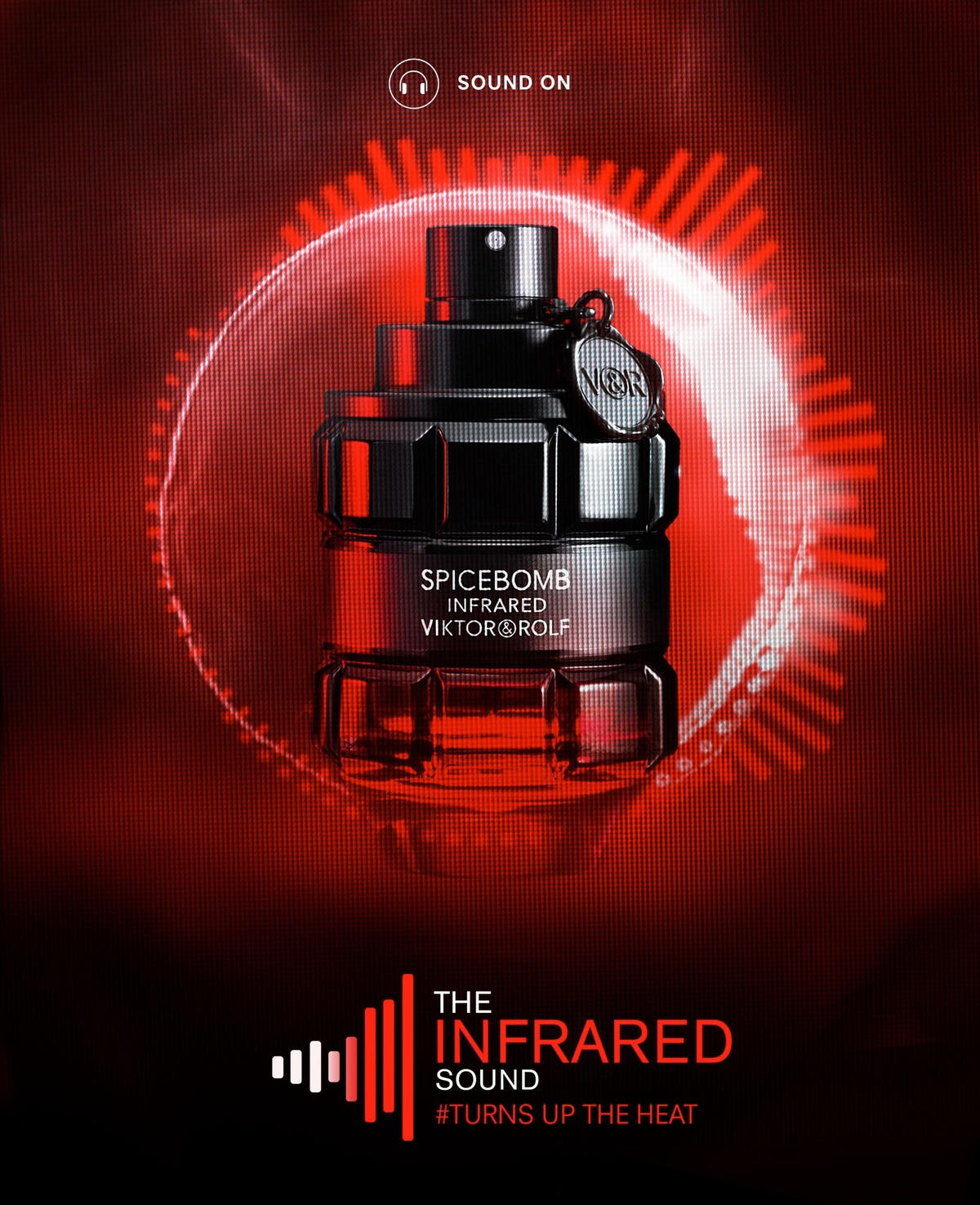 If a fragrance had a sound what would it be? We’re not talking soundtracks for 30- or 60-second television commercials, or music that captures the joie de vivre of Chanel Chance or the jaunty, flirty spirit of Guerlain Le Petite Robe Noir.

“It’s not music, it’s sound,” said Philippe Tour, managing director of IRCAM Amflify, which collaborated with International Flavor and Fragrances to create a riff for Viktor & Rolf’s new Spicebomb Infrared that would illicit the same emotions as smelling the fragrance.

It’s not as farfetched as it seems. When perfumers talk about notes and accords, composing scents, and ingredients in perfect harmony, the language of fragrance is strikingly similar to the vocabulary of music. So, it wasn’t an insurmountable leap to create a sound for Viktor & Rolf’s Spicebomb Infrared that would give listeners the same sensation as smelling the scent.

Viktor & Rolf’s Spicebomb is “blazingly sexy, spicy and hot,” rising to the challenge of its tag line, “The Infrared Sound Turns Up the Heat,” IFF said.

“There are a lot of bridges between perfumery and music,” said Jean-Christophe Hérault, an IFF master perfumer who worked on Spicebomb with perfumer Carlos Benaim. “When Viktor & Rolf asked me to work with a sound designer at IRCAM Amplify [a subsidiary of IRCAM, which stands for Institute for Research and Coordination Acoustics/Music] it sounded like an amazing experience.”

The sound IRCAM Amplify sound designer Romain Barthélémy created with IFF’s Hérault “is a combination of all the sounds that bring the same kind of atmosphere. It’s a mix of creative sound and ambient sound, like you’d hear in a nightclub or on the street. We mix all that and create the specific sound for the specific scent.”

Tour said this was the first time IRCAM Amplify translated a fragrance to sound. “We came to this conclusion that we got the objective and the target and finally delivered something very close to what Viktor & Rolf were expecting. You have to objectivize some subjective things.”

The methodology, developed internally by IRCAM, is called SPEAK, which helped the two teams find a common language. “Speak is a software toolbox to help people communicate when they’re from two different worlds and trying to find the words,” Tour said. “It’s based on psycho-acoustic research based on how the brand interprets sounds. We put that in those tools and we have a kind of semantic language: sound. We worked together to put words on something like a very subjective sound or flavor. After a couple of iterations we came to the conclusion that it’s the right message and the right sound.”

IFF and IRCAM Amplify were able to scientifically measure the actual relevance or profiles of the sounds to make sure that the perception of the sounds corresponded to the design of the fragrance. “We used fresh spices like black pepper and pink pepper and also hot spices like cinnamon and pimento,” Hérault said. “It was a way to increase the temperature because the concept of the fragrance is to warm up bodies.”

“One of the wonderful things about the whole approach is that very often when you talk about scents you have to use a lot of words and those words aren’t universal,” said Judith Gross, vice president of communication and branding, scent division, at IFF. “With scents and sounds you aren’t in the intellectual rational part of the perception, you’re in the emotional, sensory part of the perception. Sounds, like scents, are universal. Someone in Brazil, the U.S., France and Asia will be able to understand the same thing in ways that are very similar. The beauty of what it allows brands to do in the future is establish the universal correlation between the world of scents and the world of sounds.”

One of the reasons the project came about was the Covid-19 pandemic, when perfumeries and retailers were closed and the only way for consumers to experience a fragrance were costly mailings of samples.

“You had the physical barrier of not having direct contact with customers,” said Gross said. “We believe it constitutes a real revolution for e-commerce and perfume sampling. Working with a sound that generates the same sensation as the original scent means you can eliminate the hurdle of not being able to literally smell the scent because you can now hear the fragrance.”

After three months and various iterations of Spicebomb sounds that were wildly different, IRCAM Amplify’s Tour believes the teams chose the right version. “I think the conclusion was pretty good at the end,” he said. “We consider this something new and we’re very enthusiastic for doing more things like it, because it works.”