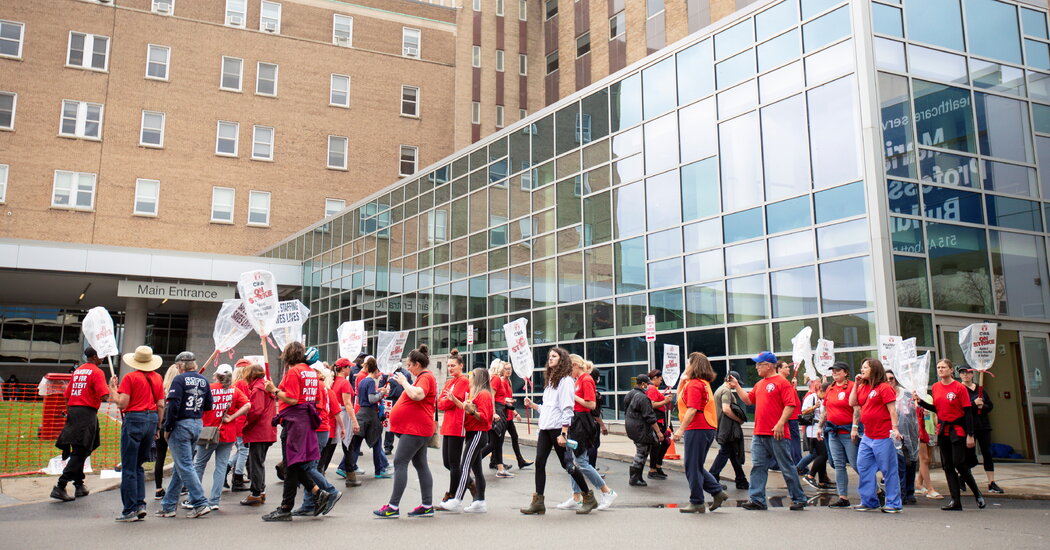 A surge in Covid cases and a shortage of health care workers is filling hospitals and nursing homes past their capacity in upstate New York, creating a growing crisis in the health care system even before the Omicron variant is known to have spread through the area, according to hospital executives from Buffalo to Albany.

Covid hospitalizations in the region have more than tripled since August when the Delta wave began to sweep through the state, Gov. Kathy Hochul said this week. At the same time, tens of thousands of health care workers have left their health care jobs, for reasons ranging from pandemic burnout to a refusal to get vaccinated in spite of the state’s strict mandate for health care workers, and some systems have posted hundreds of available job openings.

The result has been a decrease in upstate hospital capacity of about 10 percent. And a perfect storm of high patient volumes, reduced staff and an inability to discharge patients to nursing homes — which are themselves full — has begun to overwhelm some facilities, particularly in Western New York, the Finger Lakes region and the North Country, hospital executives said.

With Omicron now detected in New York City and on Long Island and the variant expected to spread, and few hospital beds upstate available for patients if Covid hospitalizations spike even higher, Ms. Hochul has declared a state of emergency.

On Wednesday, she announced that 120 National Guard troops would be deployed to back up nursing home staffs around the state. The governor’s office has so far announced nine facilities — nursing homes in Rochester, Buffalo, on Long Island and elsewhere — where soldiers will work. More locations will be announced soon.

The governor also said that all hospitals at over 90 percent capacity may be ordered to stop elective surgeries to deal with the surge. There were 56 hospitals in that category on Friday, including 10 in New York City, some of which had already taken that step.

“Hospitalizations are up, get this number, 150 percent upstate versus downstate,” Ms. Hochul said on Monday, of the rise in Covid hospitalizations since August. “Not that I’m trying to create an upstate-downstate divide in our state,” she added, “but these are the numbers we’re seeing and they’re very troubling.”

At Glens Falls Hospital in Warren County, about an hour north of Albany, patient volumes are at their highest since the start of the pandemic. About one-quarter of the beds are filled with Covid patients, the rest with patients with other ailments, including some who could typically be released to nursing homes but cannot be because of a lack of beds.

Covid-19 is widespread in Warren County, where there are 93 cases per 100,000 residents, about 5 times the rate in New York City. The virus test positivity rate is 12 percent, compared to 2 percent in New York City.

Yet masking in local stores in Glens Falls appeared uncommon, even as urgent care centers and hospitals fill with patients seeking tests and appointments. The county’s vaccination rate for all residents is 72 percent, which is actually above the state average of 69 percent, but a combination of relaxed precautions, waning immunity and the increased infectiousness of Delta is propelling cases there, as elsewhere.

“It’s so bad in this area,” said Dr. Jeremy Di Bari, a family physician who works for Hudson Headwaters Health Network and sees patients at Glens Falls Hospital and several urgent care centers in rural parts of Warren County. Dr. Di Bari contracted Covid himself when it spread through his family, despite being fully vaccinated. “I don’t think it’s going to get better,” he said. “I hope it won’t get much worse.”

Erie County, which encompasses Buffalo, has seen one of the state’s steepest rises in hospitalizations in recent weeks. The Erie County Medical Center is completely full, with patients waiting in the emergency room to be admitted. At the same time, there are 500 job openings at the hospital, which has a current work force of about 3,600, hospital executives said.

In the same pattern as in Glens Falls, there are patients — 52 of them — who could be discharged if there were only nursing homes or group homes that had space for them. While the hospital is not turning away people seeking care, between 10 and 20 percent of people coming to the emergency room are walking out without being seen because wait times are so long, officials said.

“The convergence of issues is the worst I’ve ever seen it,” said Tom Quatroche, the medical center’s chief executive officer. “We had these high volumes previously, but we could discharge them to other settings, and we had the staff to handle the volume. We are finding ourselves in a situation where the lack of staffing in the broader community, and in the hospital, is just creating a perfect storm.”

Marty Boryszak is the senior vice president for acute care at Catholic Health, which operates five hospitals and a number of outpatient and in-patient treatment centers in Erie County. Last month it settled a contract after 2,500 workers went on strike. He said hospitals in Buffalo were reaching a critical stage. “We’re knocking on 100 percent, and it’s not over,” he said.

The state estimates that 33,000 health care workers, or just 3 percent of New York’s overall health care work force, left their jobs because of the vaccine mandate, which does not allow for testing in lieu of vaccination or religious exemptions. But because the sector as a whole was already short staffed, the additional job losses have hit hard. Ms. Hochul is being cautious about imposing additional mandates in other areas in light of the experience, she said Thursday at a news conference.

At F.F. Thompson Hospital, a rural hospital on the shores of Lake Canandaigua in the Finger Lakes, 15 people stayed overnight in the emergency room one night this week because there were no regular beds available, said Michael Stapleton, the hospital’s chief executive officer. As of earlier this week, less than one-quarter of the hospital’s 115 patients had Covid, but it was enough to overstress an already taxed facility.

For weeks, the hospital had been trying to discharge 17 stable patients to nursing homes, but could not find any space. One patient was recently transported by ambulance 300 miles to a nursing home bed in New York City, Mr. Stapleton said, the closest facility that had an opening. The patient, who had several chronic conditions, had been at the hospital for three months.

About 150 staff members left rather than comply with the state’s vaccine mandate, including people with decades of institutional knowledge, Mr. Stapleton said. Things got so bad that the week before Thanksgiving, the hospital diverted ambulances for two days to other hospitals just to relieve some of the pressure.

“This is status quo now,” Mr. Stapleton said. “This is what we are dealing with. It is just an incredible number of patients.”

Kathy Parrinello, the chief executive officer of UR Medicine, the University of Rochester’s affiliated health care system, said that all six of the system’s hospitals in the Finger Lakes region, including F.F. Thompson, are operating above their licensed capacity.

Fewer staff members are working now than this time last year, because of hundreds of unfilled openings, but patient volumes are higher. Those who are working, Ms. Parrinello said, are feeling “a combination of exhaustion and ‘I can’t believe we are here again.’”

In Syracuse, Upstate University Hospital recently closed nearly 20 percent of its beds and stopped doing elective surgeries because it has about 400 vacant nursing positions, a spokesman said. More than 100 staff members left rather than comply with the vaccine mandate.

“The most pressing issue for Upstate at this time is staffing,” said Darryl Geddes, the spokesman. The hospital has raised overtime pay and is “pursuing aggressive advertising for new staff” in an effort to find more people to work.

Several counties have declared states of emergency, including Ulster County in the Hudson Valley and Wyoming County in Western New York, as virus cases have risen.

But except for Erie County, which has reinstituted a mask mandate for indoor public places, regardless of vaccination status, no local counties seem to have instituted additional virus-related restrictions for the public.

New York City remains the only jurisdiction in the state that requires people to have received at least one vaccine dose to visit indoor bars and restaurants.

Ms. Hochul has so far resisted any new statewide restrictions, saying it is up to local officials to set them.

The contrast between the brewing crisis inside hospitals and the relatively regular pace of life outside them can be stark. In Buffalo, the resurgence of cases didn’t appear to slow down post-Black Friday shopping at busy malls, though most shoppers did appear to be complying with the new mask mandate.

And at the Aviation Mall in Queensbury, in Warren County, where the state just opened a new testing and vaccination center, few shoppers wore masks inside stores on Wednesday.

“It’s hard to ignore what’s going on with cases, but the social resolve of the population to continue the good fight with mitigation measures is a bit broken,” said Dr. Thomas A. Russo, the chief of infectious disease at the Jacobs School of Medicine and Biomedical Sciences at the University at Buffalo.

Concerned about the lack of urgency among the public, some medical workers have taken to trying to warn people directly.

“Let me be blunt,” Dr. Howard Fritz, the chief medical officer at Glens Falls Hospital, wrote in a press release issued by area doctors just before Thanksgiving. “If you are not vaccinated, get the vaccine immediately.”

He added: “Your life, your loved one’s lives, and those of your friends and neighbors depend on it.”