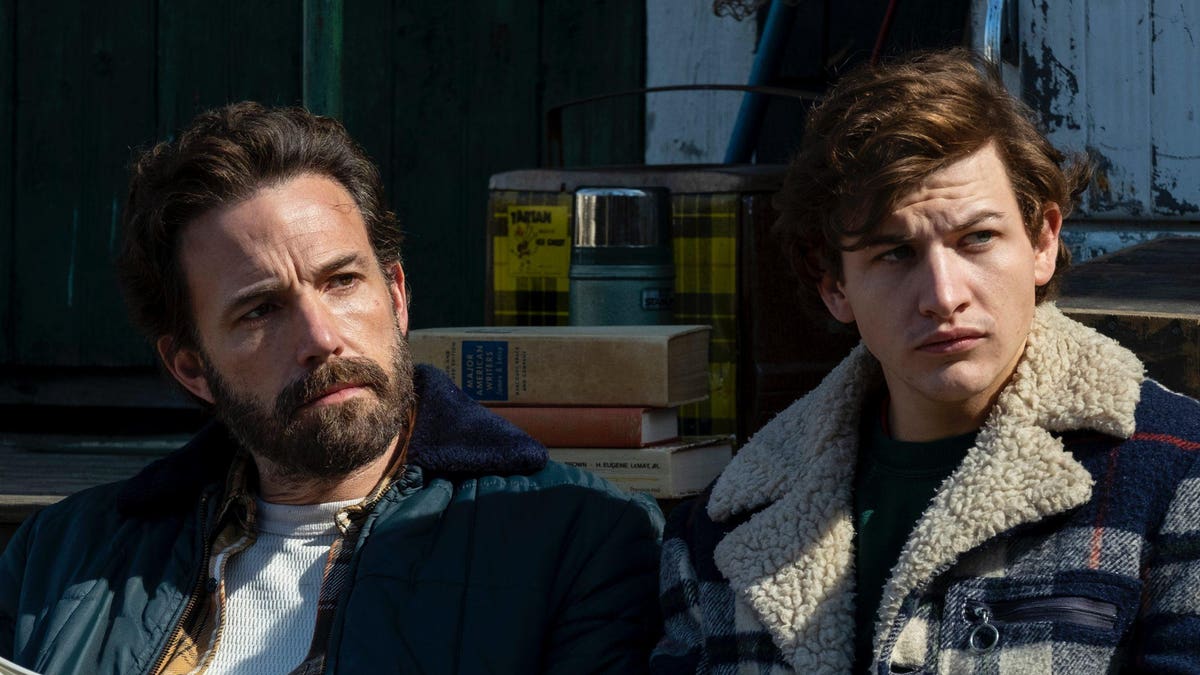 Adapted from J. R. Moehringer’s titular memoir, the coming-of-age drama The Tender Bar sees George Clooney directing the story of a boy growing up on Long Island and looking to find father figures at a local bar run by his uncle.

I caught up with Sheridan to discuss why the film was personal, how sharing stories of their fathers brought the cast and director together and being in Boston with hometown hero Ben Affleck.

Simon Thompson: The Tender Bar is a very warm movie and comes across as more personal work for you. Is that the case?

Tye Sheridan: I definitely think so. What brings everyone together is the material, the heart of this story. It’s a very tender and genuine film but not overly sentimental. It’s about family and discovery in your journey through life. There’s a lot to relate to in the movie, both for an audience and everybody working on it. We were doing a lot of these intimate scenes together, and in between camera setups, we were sitting around and reflecting on our own lives and the people who were like Ben’s character, Uncle Charlie, to us growing up. Everybody sharing these intimate stories did bring us together. We were a family just hanging out and telling stories in a bar for two months by the end of it.

Thompson: Here, you’ve got two great actors who are also great directors that you’re working with. You’ve got George Clooney behind the camera, and you are acting opposite Ben Affleck. What were the conversations that you were having?

Sheridan: We talked about a lot of things. We all spoke about our fathers, our mothers, how we got from there to here, the girl who broke their heart and this and that. J.R.’s journey made us reflective. You can be vulnerable with each other, and when you do share something within yourself, maybe you’ll have a different perspective based on what somebody else has said and how you can work something into the scene. It’s incredible how it all bleeds into what is in the film, and I think that is what makes George and Ben such amazing actors and directors. They can have this transparency between their heart and soul and what they’re putting on a screen. That is honest and genuine.

Thompson: Why were you willing to put yourself out there like that?

Sheridan: J. R. Moehringer is a real guy, and this is based on his memoir, so he put himself out there. It’s a fantastic story, and his journey is incredible. I had a lot of personal connection to the material, to him, his journey, his family, and many other things, so this did feel very personal to me. We have our differences, but I felt so connected because of my journey through life and my career. I come from a small town in rural Texas and having aspirations to work in film, and as an actor, it was not something that people were doing every day. I seemed like a bit of an oddball, and those dreams may have been a little bit far-fetched at times. J.R. felt that way, and he sometimes feels undeserving of his successes and opportunities, whether it’s getting into Yale or getting the job at the New York Times. That was very relatable to me.

Thompson: Is it quite hard to find roles that offer the kind of personal authenticity that The Tender Bar provides?

Sheridan: I think it can be. Every character is different, and maybe there’s something that you can relate to, and you feel a piece of yourself in there. You want it to feel real. It felt especially personal with this one. That’s the cool thing about being an actor and getting to work in different films is you get to grow in these characters and think about what it’s like to be other people and go through certain obstacles in life, and some are closer to you than others. It’s almost like an interesting kind of meditation or therapy.

Thompson: How much of this was filmed on location in Boston, and how much was shot on sound stages? Was the bar a real bar?

Sheridan: All the interiors were built on a sound stage which was great because we were filming this at the height of COVID. It was a bit more of a controlled environment. As you say, we shot this movie in Boston. We were shooting in and around the surrounding area, and the bar’s exterior was a real bar. When you’re with Ben Affleck in Boston, nobody cares about anybody else.

Thompson: I can only imagine the welcome he gets.

Sheridan: It was very cool to see.

Thompson: You play the older version of J. R. Moehringer, while Daniel Ranieri plays the childhood version. You share one scene, but it’s not often that the younger and older versions of the same character in a film get to meet.

Sheridan: Both Daniel and I were excited about it. When we started production, that scene did not exist. Along the way, George thought it’d be cool to have a scene with both of us, but he was wondering how to do it. He eventually said, ‘I’m working on something. It’s just kind of like a dream scene. I’m going to send it to you.’ So, he did, and we were all excited about it. Daniel was especially excited because we didn’t think we would be able to do any scenes together, so we spent quite a bit of time getting to know each other off-camera. It was amazing to see how quickly he was picking things up. This scene happened three or four weeks into production. Daniel was nine at the time, and The Tender Bar was the first film he worked on. He was dealing with all the props, saying his dialogue, doing this incredible performance. After we’d finish a take, he would reset the props, make sure everything matched the master shot, and ask what the following setup would be. I was looking at him thinking, ‘Man, you make me look bad. You’re a prodigy.’ He’s such an incredible young talent and has no inhibitions. I think he’s just delivering something genuine, real, and fun to watch.

Thompson: The release of The Tender Bar marks your first decade as a professional actor. Does this feel like a watermark for your career where you are taking stock and making a plan?

Sheridan: I don’t know if I see it like that. You’re constantly evolving, changing, growing, and trying to learn and better yourself. You’re trying to do that in your personal life and your career. I’m always looking for new ways to challenge myself, and whatever that means, that’s my pursuit. I don’t know if I’m suddenly thinking about things differently because of this movie or where it falls in my career, but I’m very excited about this, and I’m grateful to be a part of it. It’s been a blessing, but I don’t think it changes the mission.