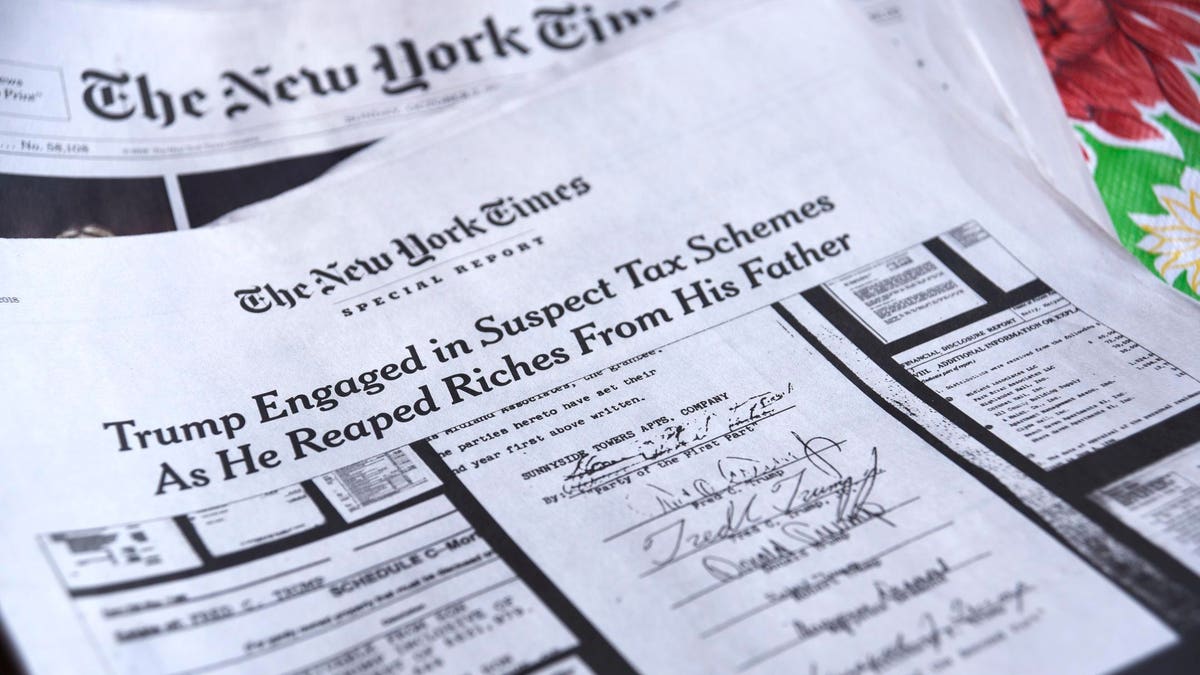 In 2018, The New York Times published a series of articles as part of a special investigation into then-President Donald Trump’s finances. The articles appear to show evidence disproving the myth perpetuated by Trump that he was a self-made billionaire, and also appear to show, through careful review of thousands of pages of tax documents, that he had a history with tax schemes, and even “outright fraud,” which served to protect his inherited wealth over decades. For their efforts, the journalists responsible for these articles, David Barstow, Susanne Craig, and Russ Buettner, were awarded a Pulitzer Prize in Explanatory Reporting in 2019.

According to a new lawsuit filed in New York State court, Donald Trump is now suing The New York Times, as well as Barstow, Craig, and Buettner, and the source who helped them obtain the tax documents—his niece, Mary Trump. Alleging there was an “insidious plot” to obtain his tax records, Trump is seeking damages of no less than $100 million. Not surprisingly, considering Trump’s pattern of frivolous legal actions against The New York Times, there is no merit to this lawsuit against the paper. What’s stopping this suit from being taken seriously by most lawyers, myself included? For starters, the claims it contains, namely breach of contract and tortious interference, aren’t likely to withstand legal scrutiny. There’s also that pesky thorn in Trump’s side called the First Amendment and its guarantees of press freedoms. This is assuming, of course, that Trump is aware of the First Amendment.

The lawsuit alleges that, in disclosing Trump’s tax records to Susanne Craig and The New York Times, Mary Trump committed a breach of a prior settlement agreement reached in 2001 during litigation involving the estate of Fred Trump and Mary Anne Trump. The actions against Mary Trump may assert a colorable claim based in contract, because Mary was a signatory to the confidentiality agreement that Trump alleges she breached, but there is no viable or meritorious claim against The New York Times. This is due to the United States Supreme Court’s expansive interpretation of the First Amendment. The Supreme Court has uniformly upheld press protections, especially against public figures, and there is no greater public figure than the President of the United States. An example of press freedoms is found in the seminal case of New York Times Co. v. United States, 403 U.S. 713 (1971), in which the United States Supreme Court ruled that The New York Times could publish “top secret” confidential government documents related to U.S. involvement in the Vietnam War, known as the Pentagon Papers, that were actually stolen from a research institute.

Because The New York Times’ liability (which is nonexistent) is based on negligent supervision of its employees, if Trump cannot demonstrate that Barstow, Craig, and Buettner committed any wrongdoing, The New York Times will not be held liable. Trump presents his argument against Barstow, Craig, and Buettner in the context of a contractual breach. As the journalists were not signatories to the confidentiality agreement, Trump is proceeding under the theory of “tortious interference with contract,” which is first premised on a contract’s validity. In Lama Holding Co. v. Smith Barney Inc., 88 N.Y.2d 413, 424 (Court of Appeals, 1996), the frequently cited case on what constitutes tortious interference with a contract under New York law, the court ruled that a plaintiff must show, “the existence of a valid contract between the plaintiff and a third party, defendant’s knowledge of that contract, defendant’s intentional procurement of the third-party’s breach of the contract without justification, actual breach of the contract, and damages resulting therefrom.”

There is a good chance that the journalists were not aware of the confidentiality agreement and there is a chance that such agreement is not even enforceable for a number of reasons. But the key argument for the journalists is the freedom of the press under the First Amendment of the Constitution and that their actions were in the furthering of the public interest—a recognized justification for interfering with contract under New York law. It is easily argued that the journalists’ purpose in convincing Mary Trump to disclose the tax records was to expose potential unethical or unlawful conduct by the President of the United States. One cannot think of a more justifiable action than exposing corruption at the highest levels of power.

While Trump attempts to intimidate through legal action, he is actually unwittingly opening himself up to broad-ranging discovery into his personal and financial affairs that could expose even more wrongdoings by him, his family, and his businesses. For example, to defend against the claims that he experienced damages, The New York Times and Mary Trump will certainly request copies of his financial records and additional past tax returns, which is something Trump has used every means possible to prevent from being disclosed in the past. The paper has already indicated that it will not be intimidated by this latest legal action and intends to put up a strong defense, with a representative for the company stating, “This lawsuit is an attempt to silence independent news organizations and we plan to vigorously defend against it.”

So, here we have it—another frivolous lawsuit in a long and growing line of frivolous lawsuits, by a man that some would consider to be the most frivolous president in history. As a former President, Trump ought to brush up on his knowledge of the Constitution, for it is likely to be his strongest opponent in this case.

We have reached out for comment to the representatives listed in the complaint, but has not received comments at the time of publication. We will update this story to include comments when we receive them.