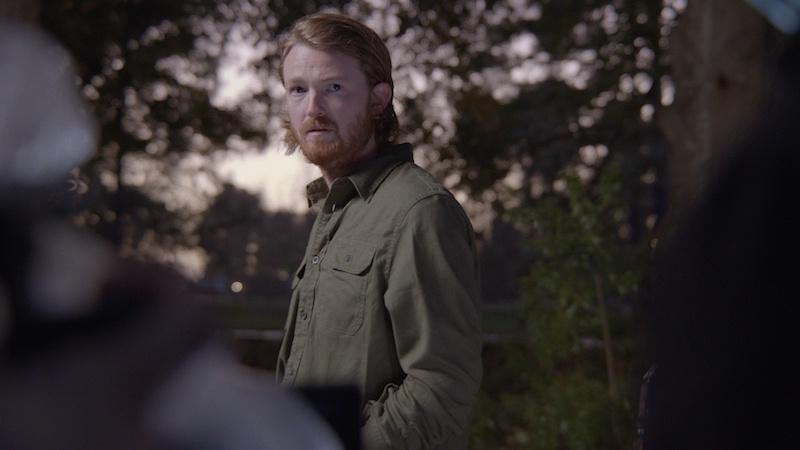 Hollywood’s latest onscreen pairing is Bruce Willis and minor league ballplayer turned actor Trevor Gretzky. The veteran action hero and the cub thespian have shot five films together in just the past couple of years, all written and helmed by Australian filmmaker Edward Drake.

In American Siege, their latest pairing, the duo play law enforcement officers in a small Georgia town whose primary job is carrying out the wishes of the town’s powerful and corrupt mayor. When an associate of Mayor Charles Rutledge (a terrifying Timothy V. Murphy) is taken hostage by three outlaws seeking to avenge a missing relative’s presumed murder, Sheriff Ben Watts (Willis) and Deputy Kyle Rutledge (Gretzky, as the mayor’s son) are ordered to the residence to defuse the situation before FBI agents arrive. When negotiations break down, the elder Rutledge calls in his lethal private security team to take out the trio before the feds arrive and discover his clandestine drug operation hidden within the house.

To avoid a bloodbath, Watts sends in his deputy through a window for one last attempt to talk to the kidnappers but he winds up being captured by the kidnappers, though he continues to try to negotiate a peaceful resolution. When the hostage, a local doctor (Cullen G. Chambers), finally reveals what he and Mayor Rutledge are up to, the young deputy realizes just how evil his father is. Both he and the sheriff, a former New York cop whose been on a downward spiral for some time, have to muster the courage to defy their boss and commit to the job they have been sworn to do.

Vertical Entertainment’s American Siege is now in theaters and available On Demand.

Gretzky is the son of hockey great Wayne Gretzky and actress Janet Jones Gretzky, who has a supporting role in American Siege as a sniper/deputy. He spoke via Zoom about shifting gears from baseball to acting and working alongside a Hollywood legend.

Angela Dawson: You and Bruce Willis star in this as well as the sci-fi action adventure Apex, which was released late last year. Which did you film first?

Trevor Gretzky: We shot Apex about three months before American Siege and Cosmic Sin before that. We just finished up the Knight films (Christmas Knight and Devil’s Knight) in Vancouver.

Dawson: So, you and Bruce are now an onscreen team?

Dawson: You shot American Siege in only eight days, right?

Gretzky: Yeah, but it was fun. Our (writer/director) Edward Drake works so hard; it’s crazy how he does it.

Gretzky: I saw him as a guy who got his job because of his father who runs the town. He really has no business doing that job. He got paired with an old washed up cop (played by Willis). He’s aloof and not very smart. He’s got a bit of an attitude and is arrogant, and has an ego that’s fake. Then he realizes at a certain point that this (hostage) situation he’s in is getting really bad and that his father is a bad guy. He has a moment of realization that he has to do the right thing.

Dawson: He eventually rises to the occasion and sneaks into the house knowing there are three armed outlaws holding a man hostage.

Gretzky: It was cool to have that change towards the end, where he decides to do the right thing.

Dawson: Bruce’s unsavory sheriff character is a departure from the heroic roles we’ve seen him play in the past.

Gretzky: Anytime I get an opportunity to work with somebody like Bruce or Timothy V. Murphy, I feel so fortunate just to learn from those guys.

Dawson: As the corrupt mayor, Timothy is terrifying and ruthless.

Gretzky: Yeah, he’s one of the best actors I’ve ever had the chance to work with, and just to be able to be around him and play his son, I feel very fortunate to be onscreen with him.

Dawson: You’ve been acting for a few years now. When did you decide to commit to acting after playing baseball?

Gretzky: Growing up, I always wanted to act. I studied it a little bit. My mom always wanted me to get into it. I was playing baseball in the minor leagues for a long time, and as soon as I got cut, I decided that now I have the chance to do what I really want to do. So, I just did it and I didn’t look back. I got off social media and put my head down and went to work trying to get into as many films and as many jobs as I could. I’m just going to keep on doing that.

Dawson: Your decision appears to be paying off judging by your growing list of credits.

Gretzky: Thank you. If you would have told me a few years ago that I would be working with Bruce Willis, Timothy Murphy or Neal McDonough (on Apex) or Chris Rock (on Spiral), I would have laughed. I’m fortunate to be learning from these guys.

Dawson: Do you think some of your skills you learned as a ballplayer are applicable to acting?

Gretzky: Oh yeah, of course. The biggest thing is being professional; showing up on time, working hard, doing your job. There are long days on set. You’ve got to stay focused. Also, I think a huge thing you learn from sports going to acting is being coachable. You can’t have an ego and you’ve got to be able to take criticism, take advice and grow. Just like anything but especially sports and acting. I think there are a lot of similarities between the two. All the time I spent growing up and watching my dad and my own experience in the minor leagues in baseball, you learn how not to be selfish and to have the right attitude, be a team player and be coachable.  I’m very fortunate to have had the experience (in baseball) that I had because I’ve scored some stuff and I’m going to keep riding it out.

Dawson: So, is baseball definitely in your rearview mirror?

Gretzky: Yeah, I’m done. Once they cut you, they cut you. I grinded a bit after trying to get picked up but after my second year in independent ball, I realized I’m done puttering around and wasting time. I’m going to go follow my dream in film. I just put my head down and keep going.

Dawson: Do you have a dream role?

Gretzky: There are a few. I’m really enjoying doing the action stuff. To be an athlete on set and be able to do physical things is really cool. There are a lot of things I’d like to do. We’ll just have to see where it goes. I’ve been fortunate with the jobs I’ve had.

I’ve learned so much from (writer/director) Edward Drake. He’s given me so much advice with the films we’ve done—American Siege, Apex, Cosmic Sin and the Knight movies—I’m just very fortunate that I’ve gotten to work with him.

Dawson: When you were filming on-location in a small Georgia town, what do you do in your down time?

Gretzky: It was the best. I’d go over to Buffalo Wild Wings and have beers with a couple of the guys after set. It’s the same experience I had when I was in the minor leagues going to these small towns around America. I lived in Iowa, Utah and Illinois. You actually get to spend more time with the people you’re working with and it makes the whole thing that much better.

Dawson: What can you say about working Bruce Willis now that you’ve worked with him several times?

Gretzky: He’s great. He’s a very personable guy. He’s funny. We always get a kick out of the lightheartedness he brings. I’m just fortunate to have gotten these opportunities to be around him while he’s still working, and I’ll cherish the time I got to watch him work forever. I’ll be able to tell my kids about it one day. I’ll tell them I got to work with that guy.

Dawson: What are you filming now?

Gretzky: We just finished the Knight trilogy, these movies about a couple of bank robbers. Then I’m going to LA in about a month to do this movie about investment banking with the Baldwin family, who are producing it. And then, we’ll go from there.