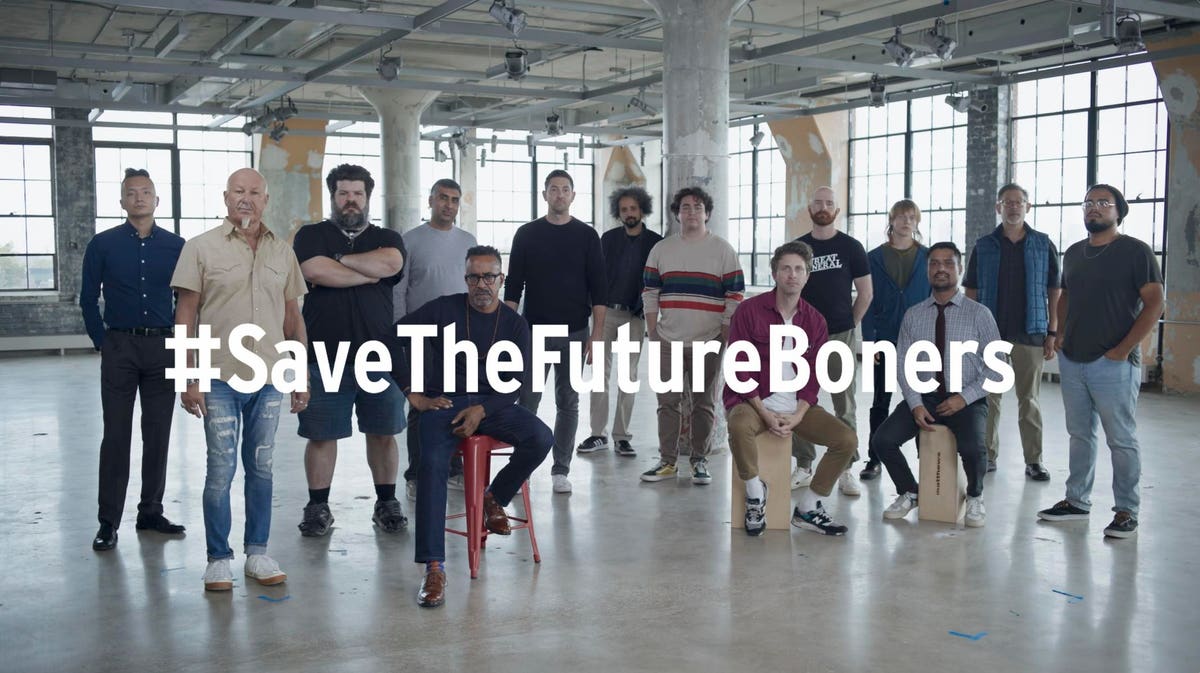 This group of urologists have a bone to pick with people who still haven’t gotten vaccinated against Covid-19.

The Urologists United For Vaccination Education (UU4VE) have appeared in a video with a stiff warning. Actually, it may have been the opposite of a stiff warning: if you’ve had Covid-19, you may be around six times more likely to develop erectile dysfunction (ED) afterwards.

If you have a penis and still haven’t gotten the Covid-19 vaccine, perhaps this video and the hashtag #SaveTheFutureBoners will get you to stand to attention. Here’s the video in all its glory (WARNING: the video does include a naughty word that rhymes with Rick Astley’s first name but has nothing to do with the song “Never Gonna Give You Up”):

Actually, it may have something to do with the song “Never Gonna Give You Up” may represent how the guys in the video feel, But more about that in a moment.

As you can see, the video began just like any day: a bunch of guys talking about their erections. Now they don’t actually use the word “erection” when they say the word “first one.” Presumably, “first one” in this case means “first ever erection” rather than “first ever slice of pizza.” After all, which are you more likely to talk about with your friends? One person says that his “first one” was at the library and another one said “1996 Olympics.”

Then the guys proceeded to describe what they think about their continuing erections. That’s not one continuing erection for years, because such a situation should prompt you to see a doctor as soon as possible, but rather repeated, periodic erections over the years. One man said that he “doesn’t remember every single one of them, but they are all special in their own way.” It wouldn’t be too surprising if you’ve forgotten some of your erections, unless you happen to use your smartphone to track each and every erection or shout out “I am having an erection” to the people around you whenever one occurs.

Next the guys described how important their erections are to them. One guy said that erections “are pretty big part” of his life and that “nowadays, it’s pretty much the only thing that I give a damn about.” Another guy describes erections as “an extension of myself,” which is true both figuratively and literally.

Finally, Tim Meadows, “stand-up” comedian and Saturday Night Live (SNL) alum gets up to say, “if I couldn’t have one, it would be devastating. And kind of boring:”

With that the camera switched to three urologists, Amy Pearlman, MD, Larry Levine, MD and Brian Le, MD, MA, who were inexplicably in something that looks like a warehouse with a desk in it:

When the camera cut back to Meadows, he looked like he had just been told that pizza doesn’t exist. “I’m sorry what? Six times more likely?”

Levine answered: “That is correct.”

Meadows responded by saying to everyone who has a penis but hasn’t gotten the vaccine, “What are you guys doing? Go get the vaccine. We’re talking about your future boners here. OK.”

This video actually arose from Quality Meats. Not from actual meats but a boutique creative advertising agency with that name co-founded by advertising veterans Brian Siedband and Gordy Sang. Now the name Quality Meats doesn’t have anything to do with the subject at hand, or wherever you may be placing or holding that subject right now. Instead, Quality Meats refers more to how a butcher may handle meat like pork chops, steaks, or even hot dogs and offer only the prime cuts.

Nevertheless, earlier this year both Siedbrand and Sang noticed two things about the pandemic. One was that not everyone was getting the Covid-19 vaccine. There remained a significant number of people, including many younger guys, who weren’t getting vaccinated. This was happening despite the continuing spread of the severe acute respiratory syndrome coronavirus 2 (SARS-CoV-2) and the substantial evidence supporting the effectiveness and safety of the vaccine.

And two, studies had come out, so to speak, showing links between Covid-19 and some impotent findings. The virus could potentially affect your genitals even though your genitals aren’t typically next to your nose and mouth, at least they shouldn’t be. For example, back in May, I covered for Forbes a study that found those who had had Covid-19 to be over 5.6 times more likely to have ED. The number 5.6 is not exactly six but is very close. Let’s not split pubic hairs here.

“We stumbled across this fact and thought, with all the vaccine hesitancy out there, guys need to hear this,” explained Siedband. “Especially younger guys who think they’re not at risk but might be not thinking about the long-term effects. Hopefully shining a light on ‘schlong COVID’ will motivate them to reconsider.” Note that “schlong Covid” is not an official medical term and is not equivalent to “long Covid” but may be a subset of long Covid.

Siedband and Sang eventually decided that public service announcement (PSA) video could be a more fun and effective way of helping people understand the need to get vaccinated against Covid-19. After all, you can tell some guys that they should do something to protect people around them, their friends, their family, and even their lungs. However, this may not quite have the same effect as telling them that it could protect their penises.

Therefore, the two began reaching out to various urologists across the country to form UU4VE. “Knowing it’s a sensitive topic for any traditional organization,” Sang explained. “We decided to create one ourselves, contacting urologists one by one.” Sang added that it wasn’t too hard to find urologists interested in forming the organization and filming the PSA because “They’re all so passionate about saving penises.” And who better to surround yourself with than people passionate about perpetuating penises.

Additional motivation came from Nicki Minaj. Actually not from Minaj herself but rather from her cousin’s friend’s balls. Or rather what she said about them. As I covered for Forbes in September, Minaj had tweeted out unsubstantiated claims that her cousin’s friend’s testicles had become swollen after he had gotten the Covid-19 vaccine. Since then, she has produced neither her cousin’s friend nor his balls to support her claims.

Brad Morris, who ended up directing the PSA, brought Meadows on board. And the rest was his-story, so to speak.

With next month, otherwise known as November, being National Impotence Month, urologists such as Pearlman are disseminating the word about the risk of ED with Covid-19 and the importance of vaccination against Covid-19:

As Meadows said, listen to the penis doctors. They know penises.

Will referencing men’s joysticks get the threat of the Covid-19 coronavirus to stick more in their heads? Will they realize that remaining unvaccinated may be robbing their Peters? It hasn’t been enough to remind everyone that Covid-19 has already killed over 744,ooo people in the U.S. alone. People don’t always take the proper precautions until it is too late. They may not play the long game or even the shlong game. Instead, they can be short-sighted and not pay attention to a threat unless it is kicking them in the balls right then and there. So perhaps #SaveTheFutureBoners will make a difference. It shouldn’t be hard to see the reasoning.