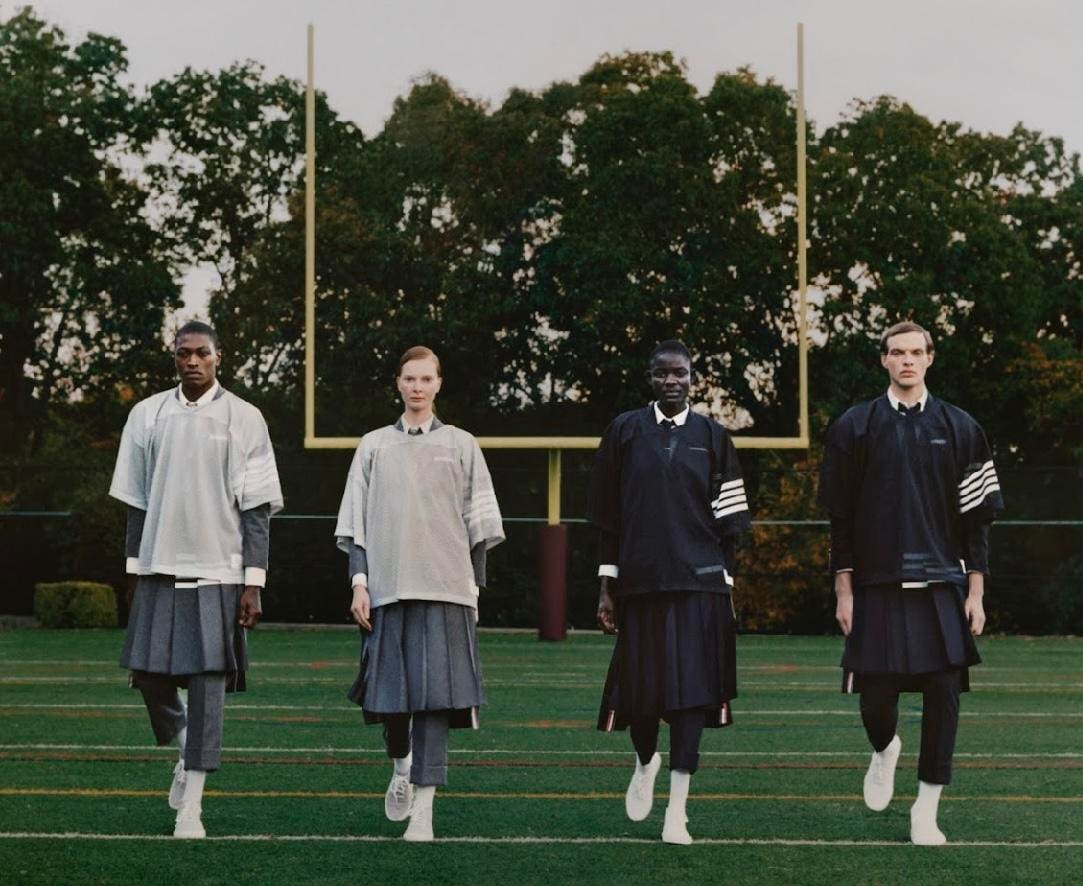 Travel, traffic, turkey and touchdowns are synonymous with the Thanksgiving weekend. Designer Thom Browne has an affinity for the latter as a sports fan who has infiltrated sports of all kinds into his thought-provoking, elevated, sometimes quirky and fantastical designs. In keeping with a holiday tradition, the brand has launched this year’s football collection, a house tradition since 2015, adding new styles and a dedicated campaign to match.

It’s the field goal on the top of a particularly high-scoring year for Browne, who has been busy opening stores in 2021, ten in total by year’s end, according to VogueBusiness.

The brand thrived during the pandemic, partly due to how film allowed the creative director and 15-percent stakeholder to expand his theatrical runway shows into captivating films, including Lindsey Vonn skiing down a mountain bedecked in Mr. Browne’s creations. Ermenegildo Zegna bought 85 percent of the company in 2018 in a deal that valued the brand at $500 million. Annual sales were aiming towards $120 million plus also according to BoF

A capsule collection is always a tried-and-true way to boost sales mid-season, but Browne’s passion for the game seems to be the motivator when it comes to the football collection. Browne, who is originally from Allentown, PA, is a fan and a participant.

“Growing up, we always played football on Thanksgiving in the backyard,” Browne recalls adding, “Moving the tradition to Central Park in 2015 with the Thom Browne family was a natural progression. Sport is the perfect opportunity to bring people together for friendly competition.”

This year the capsule has added three key styles: an athletic 4-bar mesh practice jersey, 4-bar down fill overcoat and 4-bar down fill muff to mix, including the brand’s signature flannel tailoring and football bag that adds to the designer’s menagerie of the object and animal-shaped leather goods. Beginning in 2016 with the launch of the Hector bag, based on Mr. Browne’s dog, the company increased sales significantly through the charming cult-favorite handbags.

Considering the fandom that football inspires, Browne’s collection seems ripe for an NFL branding collaboration, an idea he would entertain. “I’m always interested in working with people who are the best at what they do,” he says.

Basketball star LeBron James has often been seen in Thom Browne clothes. But do the shrunken tailored silhouettes work on a linebacker? The designer approaches that conundrum with scale, as in the case of James, he was quoted saying that the star was ‘just taller.” In the case of a football player for Browne, it’s a family affair.

“Many football players have worn the brand. My favorite, and the most important football player to wear my clothes, is my brother-in-law, Joe Wolf, who played for the Arizona Cardinals,” the designer attests.

Browne has also dressed Odell Beckham Jr. at the Met Gala in 2019 and the Griffin twins for last years’ football capsule. “Anything can work if it’s for the right occasion, and most importantly true to themselves and to feel the best in what they wear. Something that lets their personality shine,” he continues.

For those football fans not sure if they can shine in Thom Browne, the iconic football-shaped bag and backpack are loaded with the same potential of the success of Browne’s dog bags. The house introduced accessories in 2016 with a significant push.

The 2021 football collection was captured for the first time in a dedicated campaign shot by Andrews Jacobs at a Bronx football stadium, providing a glimpse of how stylish these clothes look in a stadium.