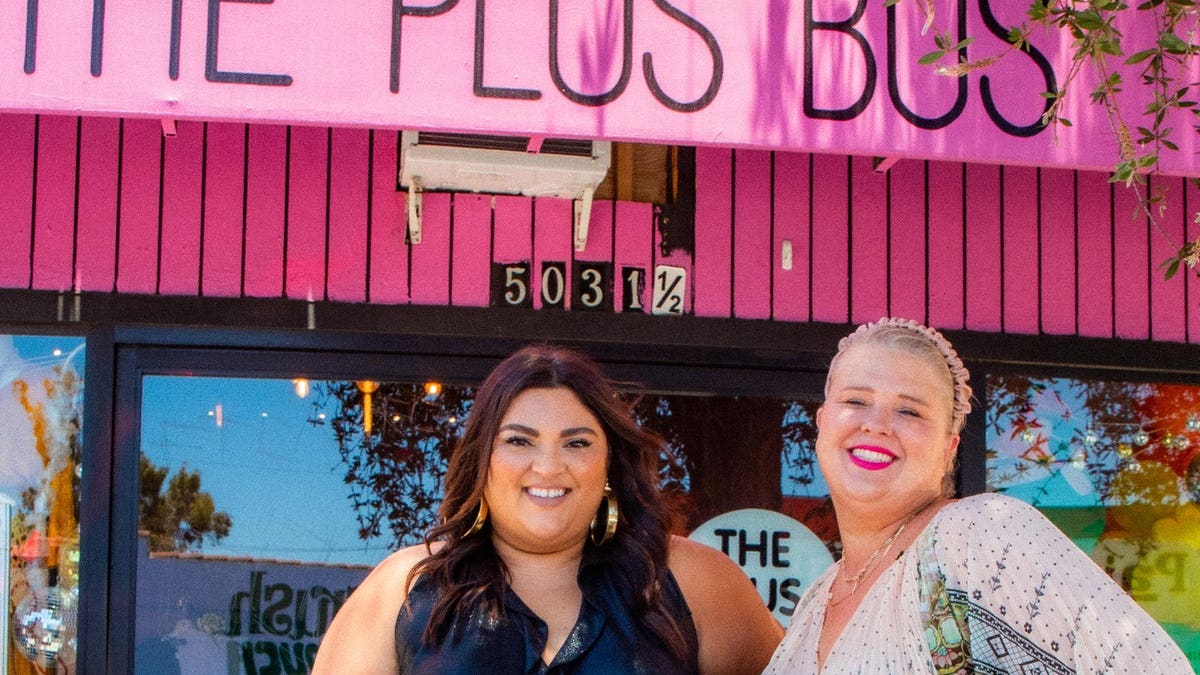 Jen Wilder and Marcy Guevara-Prete are the co-founders of The Plus Bus, a plus-size consignment boutique with a new original line based in Los Angeles. They describe their shop as, “A complete departure from the typical fat shopping experience.” The friends attribute this to the fatphobia-free culture they’ve cultivated for their customers. They believe in dispelling the practice of shopping for a “future body.” Wilder and Guevara-Prete say there’s no room for diet culture or negative body talk in their store – and they have signs posted that say as much.

“We believe much of our success is due to the experience people have when they walk through our doors,” says Wilder. “When you’ve never been into a space that exists entirely for you and celebrates you just the way you are it can be pretty magical.”

The two met at Full Figured Fashion Week in 2013.

Of their meeting Guevara-Prete recalls, “(Jen) was a bubbly blonde babbling to everyone about a plus-size line she was about to launch. I loved her energy and we soon became Facebook friends.” The two hosted a clothing swap in 2015, and were left with enough clothes to fill the inventory of entire store.

The Plus Bus was born.

Guevara-Prete was already established as a plus-size style expert with appearances on Doctor Oz and The Rachel Ray Show. Wilder had studied fashion design and worked for contemporary brands and fast fashion labels for 15 years. They considered converting a food truck into a mobile boutique, but found a small warehouse space instead.

Guevara-Prete and Wilder say they have watched the plus-size fashion landscape change drastically since they opened their doors in 2015. “When we started The Plus Bus they were two major brands and a handful of indie designers making clothes in this space. Now The Plus Bus boasts over 100 different brands ranging from fast fashion to luxury.”

One of the shop’s biggest struggles? Keeping sizes 24+ in stock. “They are the first (sizes) to go,” says Guevara-Prete. “We’re working on filling the gap between 3X and 5X that so many brands ignore with our own line.” COVID became the opportune time for The Plus Bus to launch its own originals, with Wilder at the helm. “With Jen’s background in design we have always wanted to launch our own line. COVID provided the time, bandwidth and cash flow to allow us to create space for Jen to do her thing.”

So what’s next for Guevara-Prete and Wilder?

“As we continue to grow we hope to continue to offer more and more options. It is our mission to spread (a body positive) message via fashion to people so that the next generation growing up doesn’t have the same body image issues we do.”