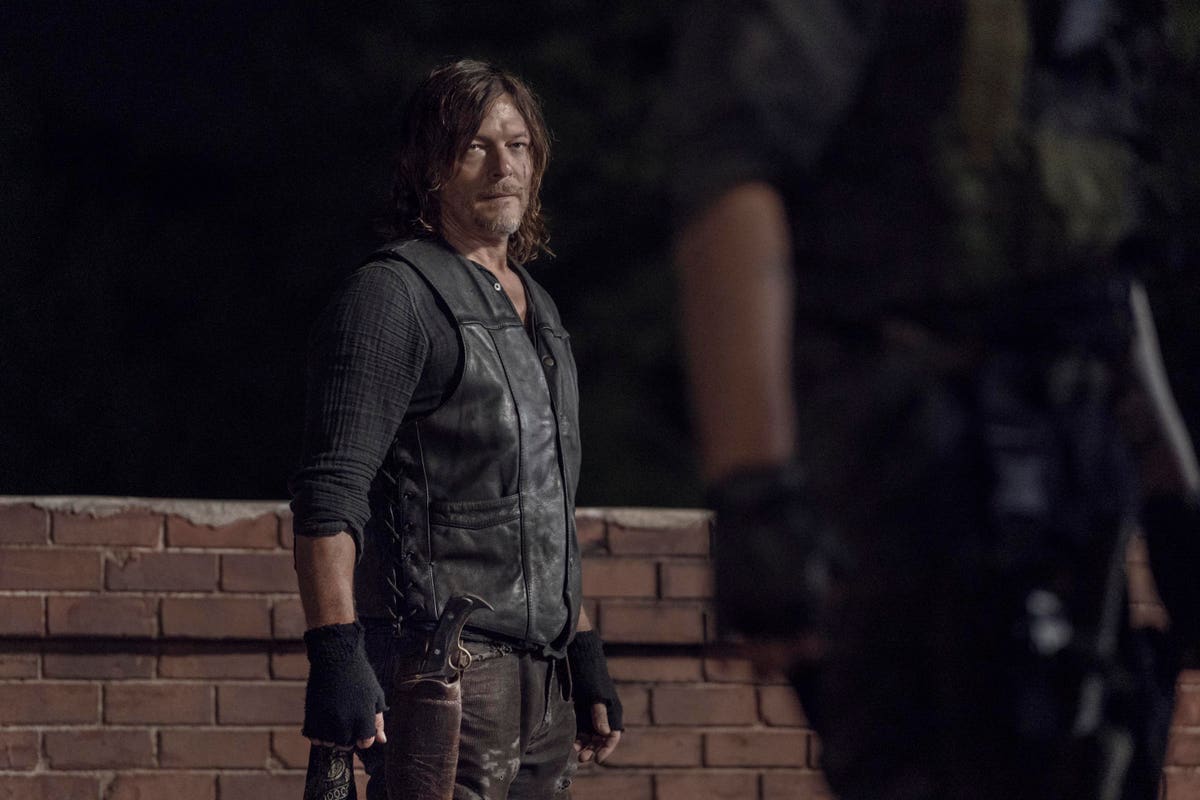 This opening act was a mixed bag at best, with a few reasonably decent episodes and a few stinkers and nothing truly groundbreaking or memorable other than a house of horrors episode that was good old-fashioned horror movie fun—and completely, implausibly absurd.

The mid-season finale (mid-mid-season?) was one of the decent episodes, minus some irritating bits. It ended with a pair of cliffhangers, meaning we’ll have to wait until February 20th to find out what happens to the fate of some of our heroes. Will Negan get blown to pieces? Will Judith and Gracie get chomped up by zombies?

The answer to both these questions is almost certainly “No” but realistically the show probably should start killing off characters at this point, so it’s possible that somebody dies in episode 9.

Maybe Do Fear The Reapers

The vast majority of ‘For Blood’ focuses on Maggie and Negan’s assault on the Reapers and their ludicrous, irritating leader, Pope.

Pope is a terrible villain. He’s very nearly Fear The Walking Dead levels of bad. He’s ruthless like Negan without any of Negan’s charm. He’s both a military veteran and a religious fanatic. He talks with a thick Texas drawl and has about one facial expression—a scowl.

He also talks about Maggie, referring to her as “my enemy” as though she’s done anything but lose to him constantly. This is something the show has set up but keeps pretending is the other way around. Pope beat Maggie over and over again, taking her fort and he supplies, killing literally all but three of her people, but the show wants us to think that Maggie is this tough, badass leader instead of just Rick Grimes Lite with just as lousy a leadership style and an even faker accent.

But back to Pope. Here’s a “leader” willing to throw one of his precious few men into the fire for failing to protect one of his other men. This makes no sense.

He’s also willing to fire a huge barrage of rocket arrows down on his own people to stop Maggie’s group and the zombies instead of calling them back. Later in the episode that it would have been super easy to just walkie talkie a retreat. Rather than preserve what small force he has remaining, Pope will just kill them for no reason other than “god speaks through me.” Oh cool, another crazy Walking Dead villain. So original!

Pope’s bizarre stubbornness prompts Leah to apparently side with Daryl. She stabs Pope in the throat with her knife and that’s the end of Pope. Then she kills the guy who lit the fuse and Daryl cuts the fuse before it can go off.

That’s a pretty crucial moment as far as these things go, so it’s a shame it was built on such a flimsy pretext. Really, the entire Reaper storyline is so bad it kind of detracts from everything else.

The Reapers are these supposedly really scary, really tough bad guys who always wear intimidating masks but even the masks are gone by the final showdown for some reason.

If I’m counting correctly there are maybe a dozen of them tops at this point, at least before the fighting started—hardly a terrifying force. Yes, they have lots of land-mines and the arrow-rocket-barrage Supremo thingy, but other than that they’re just a boring group that talks about family a lot but mostly act like they hate each other’s guts.

In any case, Daryl helps Maggie and Gabriel sneak into the outpost which was formerly Maggie’s. How she lost it to these chumps is beyond me. She directs Gabriel to a high-up room where a sniper rifle is conveniently hidden, though Gabriel’s sniping skills are apparently pretty lousy. He gets what—one guy? Surely he could have taken a few out since they all just continued to fight completely exposed in the courtyard.

When Daryl realizes what they’re about to unleash on the horde below he’s forced to fess up to Leah about his true goals. His people are down there and he doesn’t want them to die. She can join them if she wants. What Daryl doesn’t account for is that while Leah may not want her people to die—and kills Pope to stop that from happening—she’s more than okay letting Daryl’s people die to protect her own.

This is the first of the cliffhangers. Pope dead, Reapers retreating, things are looking good—and then Leah radios her comrades and tells them that Daryl killed Pope. “Why are you doing this?” he asks, though the answer seems pretty simple. She’s not protecting her people—she’s getting some revenge on Daryl for lying to her. She aims the rocket arrow machine—it’s called a “hwacha”—down on our heroes and suddenly hundreds of sparkler rockets come swirling down from above. Cut to black.

The second cliffhanger takes place back in Alexandria during the . . . .

Other than one good Rosita scene, I really disliked the zombie hurricane subplot of this episode. Again, I feel like we’re entering Fear The Walking Dead territory. Let’s recap ever-so-briefly.

Basically, a huge storm hits Alexandria (but not, it seems, just north of there or wherever the Reaper base is located). Many, but not all, of the Alexandrians are in one of the houses when they see that a portion of the wall has been taken out by the storm.

Several of our heroes—Aaron, Carol, Kelly and Connie—head out to try to fix the fence. Alexandria really needs to up their fence game. This is a constant problem that a little engineering could solve pretty easily.

The rest of the survivors, including the children and Virgil, who’s still recovering from his feral-people-inflicted wounds, stay in the house. There is some very cheesy dialogue between Judith and Gracie.

“I want to be more like you, Judith! Nothing scares you!” Gracie says.

“Gee, Gracie, that’s swell and all but I do get scared,” Judith replies. “I just use my fear. Channel it into a berserker rage.”

“Gosh, Judith,” Gracie says, “I sure wish I had berserker rage!”

Gracie not only has no berserker rage, she has no common sense. It’s like the writers on this show think that kids raised under post-apocalyptic conditions would have no training whatsoever for some reason.

Gracie stands next to a boarded up window play-fighting, all happy after Judith’s pep-talk. “Gracie, don’t stand by the window you absolute moron,” Judith says, frowning. Just then a zombie grabs her and she screams and Judith hacks off its hand. This causes a bunch of other zombies to come knocking and they can barely fend them off—apparently the door is rotting because that’s a normal thing for doors to suddenly do— until Rosita goes outside to “buy them time.” For some reason the other adults in the house let Rosita go alone and just watch as she kills every last zombie out there.

“Let’s not stand next to windows ok?” she says when she comes back in, getting her (I think) first cool one-liner following a solo fight scene. Everybody stares in awe at the badassery of her berserker rage skills. It was a pretty damn cool moment, actually, and something Rosita absolutely deserves. She’s consistently one of the better characters on this show, including her great, tense scenes with the Whisperer mole after he killed Siddiq and with Beta on his murder spree. More Rosita, please.

Later, though, all the zombies are back battering at the doors and windows. I guess staying quiet in a house during a really loud storm isn’t enough these days and zombies can just smell people out or something.

Not really sure why the zombies return and attack this specific house when there are so many others to choose from but this time Judith’s powers of zombie slaying are no match for the horde and they flee the crumbling downstairs door and head upside.

They charge Judith with making sure everyone gets up there for some reason, even though she’s a tiny little girl, and she gets everyone except that rascal Gracie. Gracie, you rascal! Where yare you?

“Golly gee, Judith, I just wanted a weapon like you so that I could tap into my primordial powers,” she says.

“You betcha, Gracie!” Judith says, snapping a mop handle in half. “Here’s your Wooden Spear of Zombie Slaying.”

“You bet your bottom dollar, Gracie!”

Naturally, the two make it back up the stairs just in time to run headlong into the zombie horde shambling into the house through the “rotten” door (why is the door rotten exactly? This is someone’s house, not a ruined structure.) So they run back into the basement, lock the door and hide, just the two of them, as the zombies pound on the door and the rainwater pours in from the windows.

I have some questions.

The assault on the Reaper base was mostly a pretty fun bit of action. I liked the twist of Leah killing Pope and then just taking over as the new Reaper boss rather than running off with Daryl into the sunset. She was more ruthless than he realized. Hell hath no fury like a woman scorned, and he’s broken her trust twice now. What did he expect?

I’m less of a fan of having two separate cliffhangers, but it’s not a huge deal. At least we have some suspense between now and Episode 9 in February. I just fully expect AMC to spoil their own show at this point, so if someone important does die we’ll probably hear about it on Twitter first and if we don’t, I’ll just assume that means nobody important dies. Maybe some extras or side-side characters like the Kingdom lady with the bow who never gets any lines.

Other than the badass Rosita moment, the Alexandria stuff was almost unbearably cheesy. Judith’s made far too saccharine-sweet for my taste. I’d like to see her a little rougher around the edges at this point. And making Gracie a useless twit who gets everyone else into trouble seems like a cop-out, unfair to the character and insulting to audiences.

In the end, very little has actually happened this season so far despite eight of the 24 episodes being over and done. The only meaningful story progression has been at the Commonwealth with Eugene’s group and the Maggie/Negan relationship. The Reapers are 100% a side-show and all the Alexandria stuff has been wheel-spinning filler.

You could cut almost everything in this season and just have an episode where Maggie and Negan are forced to work together and an episode where the Commonwealth stuff happens and the story would be in the exact same place, with no major characters dead and virtually nothing of value having taken place except now Maggie has only one of her people, other than her son, left alive. This seems like a pretty big problem to me for the final season of a major television show.