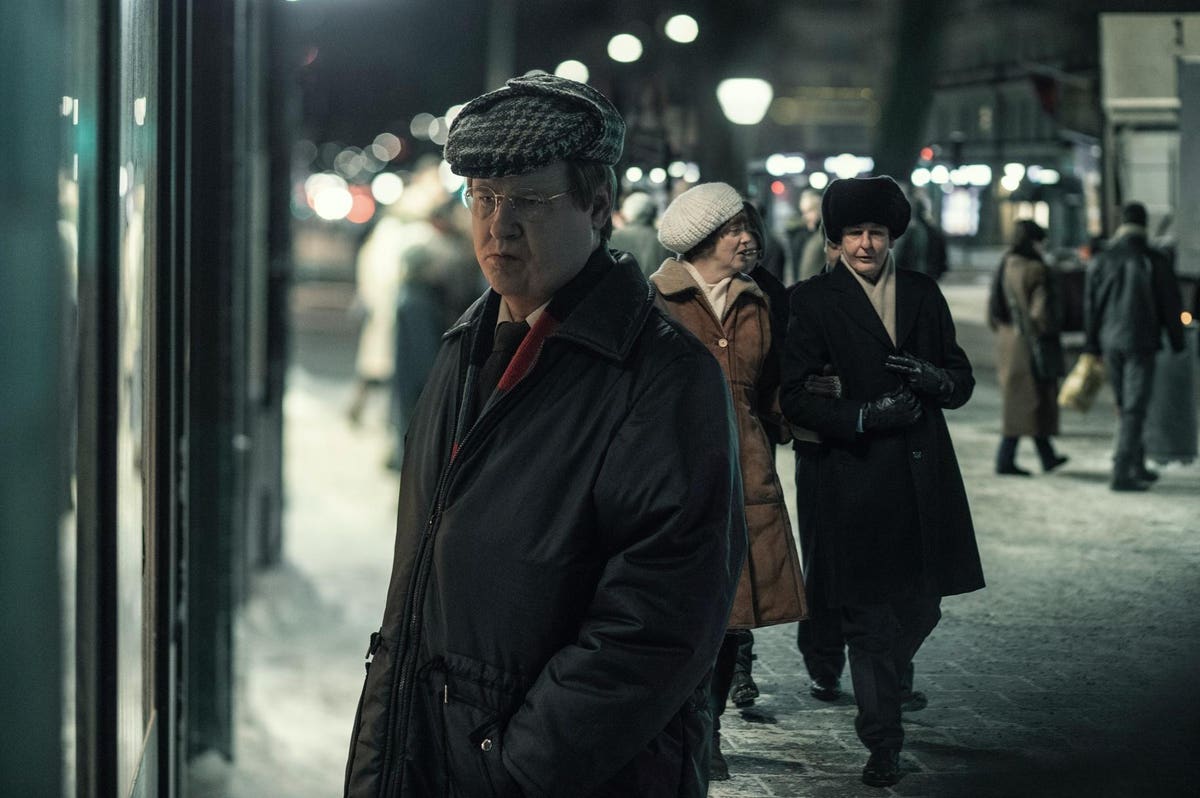 New Swedish series, The Unlikely Murderer, a fictional dramatization of a true crime, is now on Netflix . It is a captivating limited five-part series about a murder mystery that shook Sweden.

The Unlikely Murderer opens with the sound of a gun firing, followed by an image of a man holding a gun in his hand. As the opening statement announces, The Unlikely Murderer is based on an unsolved case. In February 1986, Sweden’s Prime Minister Olof Palme was murdered, shot in the back, as he was walking down one of Stockholm’s busiest streets with his wife after having gone to the movies that evening.  It thus appears ever so bold to begin the series with the image of the murderer—one that was never proved to have committed the crime. For The Unlikely Murderer, it is undoubtedly Stig Engström the culprit.

As Netflix’s synopsis describes, this five-part series is “a fictional interpretation of how Stig Engström managed to elude justice.” The series is adapted from a 2018 book, also named The Unlikely Murderer, written by Thomas Pettersson, who investigated the case thirty years later, leading him to pin the murder on Stig Engström.

The assassination of Olof Palme is Sweden’s highest profile murder investigation in the nation’s history. On the night of February 28, 1986, the Swedish prime minister, discharged his guards and went to the movies with his wife Lisbet, their son Marten and his girlfriend. After seeing the film, Olof Palme and his wife walked down Sveavagen, a busy street in Stockholm. The gunman attacked them from behind, and shot Palme in the back. He died instantly. The gun was never found. What ensued is a series of errors and mistakes made by the police investigation, a too large a number of witnesses to question, a multitude of theories on who had motive, and no conclusive evidence. Finally in 2020, 34 years later, Chief Prosecutor Krister Petersson named Stig Engström the killer, based on circumstantial evidence. However, as Engström died in 2000, no charges were brought against him, and the investigation was closed.

The five-part series, written by Wilhelm Behrman and Niklas Rockström and directed by Charlotte Brändström and Simon Kaijser, thus follows Thomas Pettersson’s investigation, showing how an unassuming graphic designer, Stig Engström (played by Robert Gustafsson), committed the crime and got away with it.

What the series succeeds in showing is how botched the police investigation was. The first police force that were at the scene of the crime appear confused and disorganized. The crime scene was not secured until the next morning. Detective Arne Irvell (played by Peter Andresson) was not immediately called to the scene, deeming that he needed his rest, as one policeman informs him. The case is taken over by chief constable Hans Holmér (played by Mikael Persbrandt) who has no real experience with murder investigations. Detective Arne Irvell though continues his own search for the murderer, which points him toward Engström. Irvell’s investigation is, however, constantly dismissed by Holmér.

Much of the series is dedicated to portraying Stig Engström, his character, his life, and the possible motive he could have had to kill Palme. The series thus shows how Engström kept changing his story after hearing the news or reading the papers, contacting the journalists himself to have his statement and photograph published. After its initial episodes, the series then turns into a deeper examination of Engström’s character. The series depicts a sad portrait of the man. Constantly teased by his so-called friends with whom he plays bridge, increasingly unappreciated at his work place Skandia, Engström appears a very lonely and bitter man. This is where the last episodes start to drag on a little, becoming slightly repetitive.

The Unlikely Murderer is an absorbing Scandi crime drama, that presents a thirty-year-old murder mystery as a solved case.