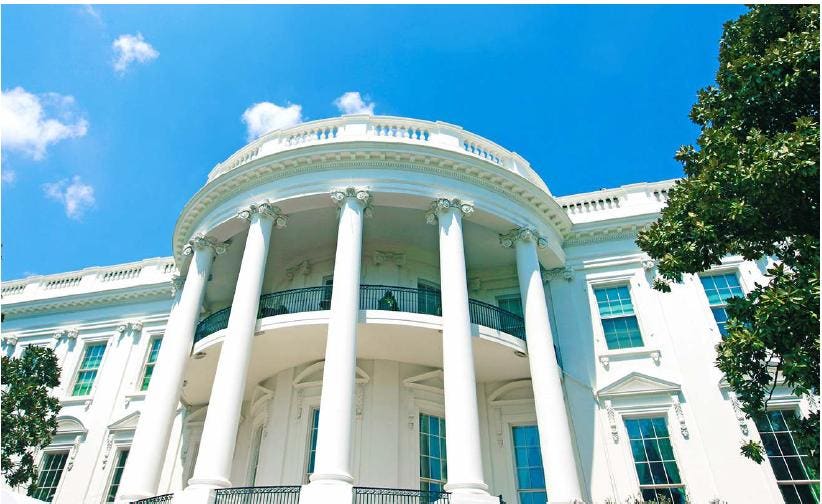 President Joe Biden is expected to sign an infrastructure bill that was passed through the House and the Senate over the weekend. The bi-partisan bill had support from 15 Republicans in the House, but six Democrats voted against it. Equity index futures are trading higher on the news, which means the S&P 500 (SPX) could keep its seven-day winning streak alive.

The infrastructure bill has prompted rallies in a few stocks like Caterpillar (CAT) which builds some of the large machinery needed for infrastructure projects. CAT was up more than 5% before the bell. Engineering and construction stock Fluor (FLR) was up more than 3% in premarket trading. And ChargePoint (CHPT) rose nearly 12% in premarket trading because the spending bill wants to increase the number of electric vehicle charging systems around the country to make EV travel more feasible for longer trips.

Despite the possibility of new charging stations, Tesla (TSLA) is trading more than 4% lower before the open after CEO Elon Musk conducted a Twitter poll to determine if he should sell 10% of his stake in the company. The poll results showed that his Twitter followers were okay with the decision.

The Chinese government is also prompting market moves. This morning The Wall Street Journal reported that China would issue licenses for education companies for after-school tutoring programs. Earlier this year, Chinese education companies were hit hard when the Chinese government was concerned about capitalist excesses. The news prompted rallies in New Oriental Education & Technology (EDU) which rose nearly 10% in premarket trading, Gaotu Techedu (GOTU) was up more than 18%, and TAL Education (TAL) traded about 9% higher before the opening bell.

The themes of earnings season in October were all about inflation, higher costs, higher interest rates, worker shortages, and supply chains. But November appears to have altered the attitude because more earnings announcements appear to reflect a populace is already on the path to normal. Also, investors appear to have moved on from pandemic trading to reopening trading.

Movie watchers are abandoning their home systems and heading back to the theaters. Cinemark (CNK) missed on earnings estimates and initially sold off before the bell. However, the stock turned around and rallied more than 8% throughout the day. While the company did miss on estimates, its revenue grew from $35.5 million in the second quarter to $225.5 million in the third. Cinemark competitor AMC Entertainment (AMC) reports on Monday.

Moving About the Cabin

Today marks the end of the U.S. travel restrictions for vaccinated travelers, which means that vaccinated foreign tourists are able to visit the U.S. While the end of the restrictions was well known, the AMEX Airline Index (XAL) still rallied nearly 7% on Friday. Delta (DAL) and JetBlue (JBLU) helped lead the way among the major airlines, rallying 8% and 7.6% respectively. United (UAL) rose 7.26%, while Southwest (LUV) climbed more than 6%. American (AAL) was the weakest of the group, rallying 5.77%.

The impetus for these moves may have come from the Expedia’s (EXPE) earnings announcement. Expedia beat on top- and bottom-line numbers, which prompted the stock to rally more than 15% on Friday. Airbnb (ABNB) also helped feed the excitement because it was up almost 13% after beating its estimates.

In contrast, stay-at-home stocks like Netflix (NFLX) is down more than 6% in the last two days despite no bad news and a technology sector rally. Another stay-at-home activity was sports betting, but DraftKings (DKNG) reported misses on earnings and revenues, prompting the stock to trade 2.37% lower. Gamblers may be looking to place their bets in person because MGM Resorts (MGM) rallied 6.27%. After selling off on Thursday, Caesars Entertainment (CZR) and Penn National Gaming (PENN) saw rebounds of 3.26% and 7.6% respectively.

Supply Troubles: On Friday, crude oil (/CL) rallied more than 3% and continued to rise on Monday morning before the open as traders raised concerns about OPEC+ (Organization of the Petroleum Exporting Countries and allies including Russia) plans for oil output. Reuters reported that the Biden administration has pushed for OPEC+ to increase its output and help rein in rising prices, but the organization has decided to stay with its current plan.

Interest Rate Enigma: It seems a little odd to discuss the problems with rising interest rates when the 10-year Treasury Yield (TNX) dropped 4.66% on Friday. However, it’s difficult to determine a reason for the drop in yields. The October Employment Situation report released earlier in the day was much better than expected. Many analysts would expect investors to react by selling bonds to buy stocks because the economic picture is getting better. Selling bonds would normally drive yields higher.

Perhaps investors are speculating that the transitory portion of inflation will be resolved sooner than expected. Another possible explanation is that some investors may be concerned about longer-term economic growth and are looking for the relative safety of bonds. Unfortunately, we may just have to wait for an answer to be revealed. The 10-year yield did rally Monday morning 1.72% before the market open.

Vaccination Vexation: Vaccine-maker Moderna (MRNA) closed 16.56% lower on Friday and is down approximately 31% in the last three days. There two possible reasons for the fall. First, the company reported that its COVID-19 vaccine won’t be authorized for children and teens before the end of the year. Second, the company is having supply troubles resulting in struggles in getting the vaccine out to various countries.

To make the matter worse for vaccine makers, the Fed’s October Beige Book revealed that resistance to vaccinations is leading many workers to quit their jobs instead of getting the shot. On Friday, U.S. News and World Report listed 11 states that have filed suits against the Biden administration’s business vaccine mandates. These developments could slow the growth of vaccine adoption.

Pfizer (PFE) and Merck (MRK) will soon offer COVID-19 therapeutics that have data showing that they’re effective in treating COVID-19 and avoiding hospitalizations and deaths. While these companies and the CDC have both cautioned that the therapeutics aren’t a substitute for vaccination, they do provide an alternative to the vaccine hesitant.

While COVID-19 vaccinations continue to rise, growth in the U.S. may be harder to come by especially as life increasingly returns to normal and urgency for protection against the vaccine decreases.