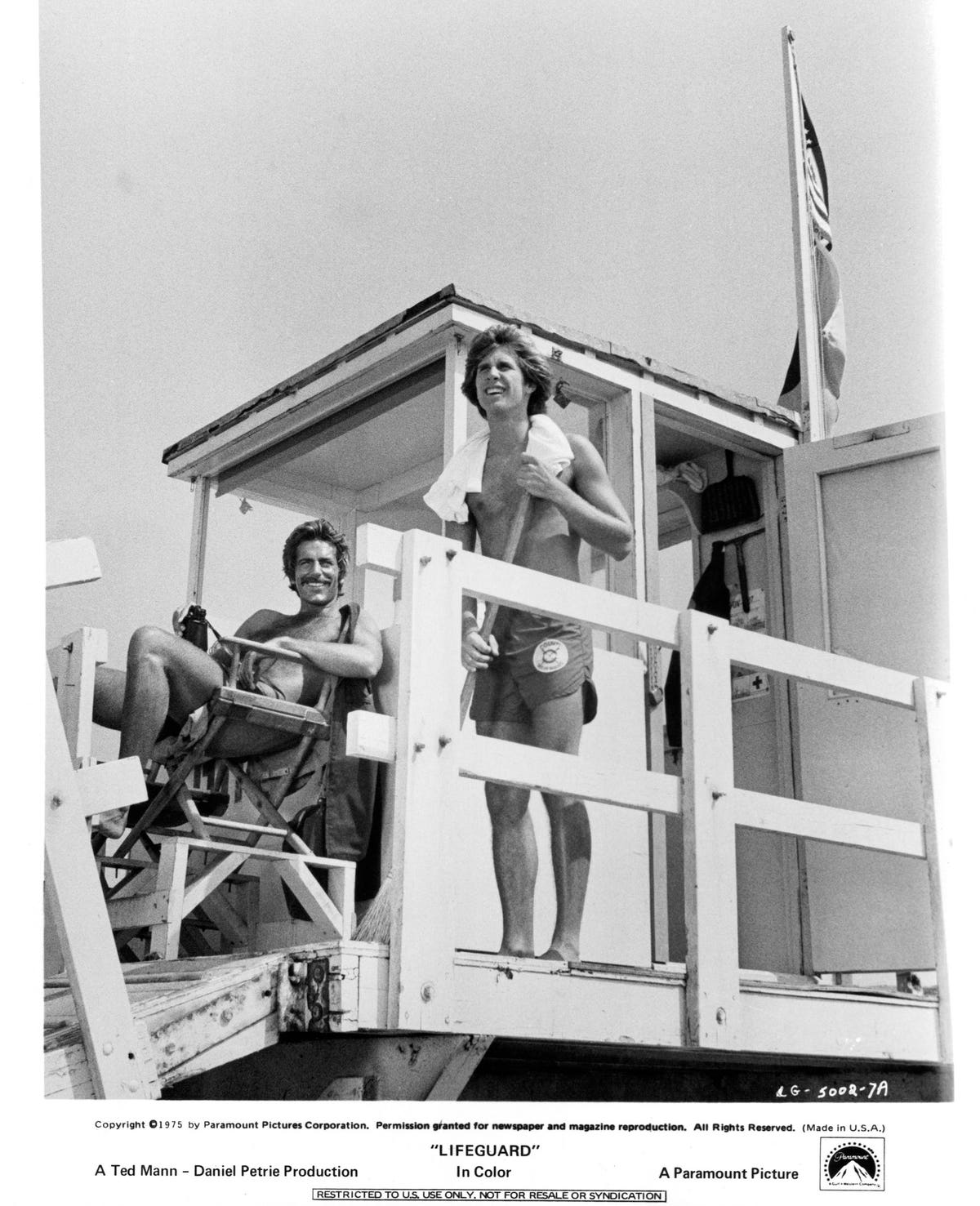 The 1976 movie Lifeguard, now streaming on Amazon prime video, is an exception to Hollywood’s usual superficial and clichéd characterizations of the work world. Lifeguard presents a nuanced view of work, understanding the role of craft in even the most ordinary jobs. It is timely with the current discussions of a “Great Resignation” and worker withdrawal from jobs.

The movie centers on Rick Carlson, played by Sam Elliot, an aging (32 year old) lifeguard on the beach in Southern California. One day, a former high school classmate, Larry, who works at a Porsche dealership in the San Fernando Valley appears on the beach, and suggests Rick might want to leave the beach and get a real job. He says that Rick would be a good fit for the dealership, given Rick’s strong people skills.

Soon after, Rick goes to his 15th year high school reunion (class of 1960). When he first says he is a lifeguard, his former classmates appear embarrassed, so he switches to “I work for the County”. At the reunion, Rick meets a high school girlfriend Cathy, who is recently divorced, and the two connect. Cathy gently suggests that Rick might want to move forward in his career. Later when he goes to visit his parents, his father angrily tells him that he needs to grow up, “You’re not a kid on the beach anymore.”

Rick decides to pursue the Porsche job and after an interview is offered the position. Over the last weeks of summer, though, he reflects on the various roles he plays on the beach. As summer ends, Rick tells Larry he has decided not to take the job. An exasperated Larry asks,  “How long do you think you can go on being a lifeguard?” to which Rick replies “Just as long as they’ll have me.”

At the movie’s site on Amazon.com, some commenters see Rick’s story as the importance of doing what you find fulfilling, without a focus on money. But that’s only a small part of Rick’s story. The larger part is a story of finding craft and excellence in a job that most people would regard as minor and routine.

For Rick being a lifeguard is not a summer or short-term position, on the way to a “real job”. We see Rick rescuing swimmers caught in an undertow or who have ventured too far out beyond the waves. He responds quickly to bullying and altercations—“not on my beach.” In his interview at the Porsche dealership, Rick explains that the bronzed Adonis view of a lifeguard is out of date; today a lifeguard daily exercises skills of public relations, dispute resolution, and problem solving.

Rick instructs his summer assistant Chris (Parker Stevenson) to always be on the alert: concentrate, understand how swimmers approach the ocean, anticipate problems. “The important thing is to spot trouble before it happens.”

Over the past few months a main labor market narrative is the slow return of workers, what has come to be called The Great Resignation. Employers cannot find enough workers for a range of direct service jobs. The shortages cover not only hospitality, restaurant and retail jobs, but also certified nurse assistants in long term care facilities, case managers in disability agencies, and customer service representatives.

The shortages already are having the impact of increasing wages in the lower wage occupations among these jobs; and it’s likely that wages will continue to rise. Here in California, several industry associations, including in long term care and trucking, are identifying state policies for higher wages in these jobs.

Improving wages is the best way to a more stable direct service workforce, a workforce of craft and quality service. But it’s also true that, as Lifeguard illustrates, a job is in good part what the worker makes of it. There are lifeguards that go through the motions, failing to see how the job can be approached. Then there is Rick Carlson, who views himself as a craftsperson, the beach as his work bench.

In 1974, two years before Lifeguard, Studs Terkel popularized the idea of craft in seemingly ordinary jobs in his book Working, still widely read. A range of workers in blue collar and service occupations, including a waitress, bookbinder, and even a gravedigger talked about the craft in their jobs, their attention to detail and pleasure in a job well-done. Since Working was first published, it has inspired other thoughtful books (among them, Ten Thousand Working Days, Shop Class as Soulcraft, and A Cliff Walk), exploring similar themes of craftsmanship.

Responding to the media attention to the Great Resignation meme, the usual commentators are rushing forward with their critiques of employers, of private businesses, of capitalism itself. They present every issue through their ideological lenses. They can offer no realistic social or economic strategies going forward. Ignore them.

Instead, to think about The Great Resignation and strategies forward, start with Lifeguard. It offers a part of the answer. Enjoy the craft of lifeguard Rick Carlson. Enjoy Sam Elliott, Parker Stevenson, Kathleen Quinlan and Anne Archer. Enjoy the beauty of the Southern California beaches, and enjoy “Time and Tide”, the movie’s theme song by that king of the 1970s sound, Paul Williams.