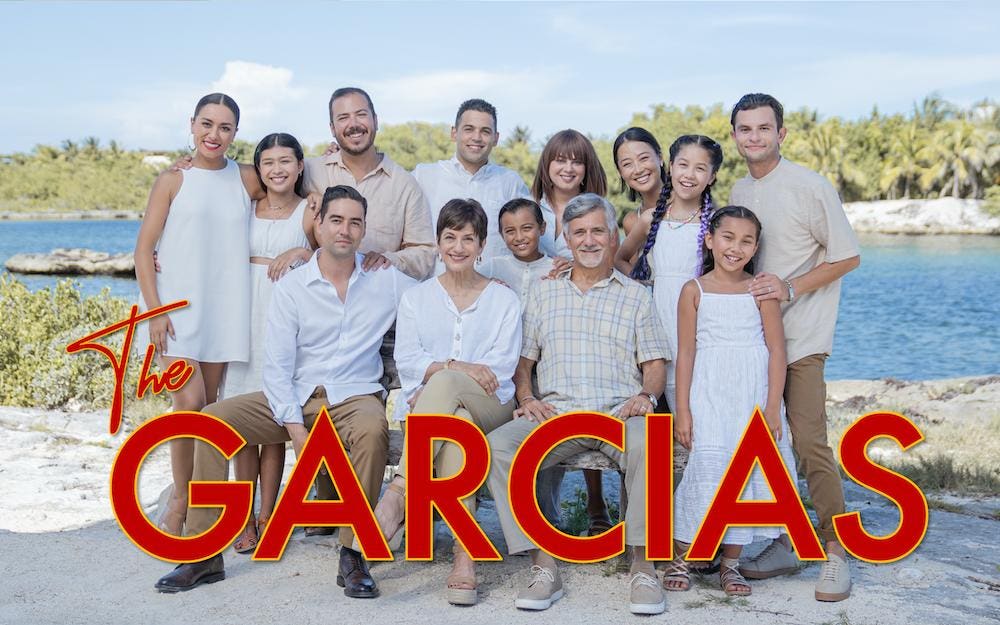 More than 20 years after The Brothers Garcia debuted on Nickelodeon, the hit award-winning series that ran for four seasons from 2000 to 2004 is being revived as a sequel. The Garcias fast forwards to 2022. The kids all grown up with families of their own, coping with present-day situations during a beach vacation in Mexico’s Riviera Maya. The half-hour comedy, with an almost all Latino cast and creative team premieres April 14 on HBO Max.

Bringing the story of the Garcia family back to life was an odyssey in itself. It took Jeff Valdez, the show’s creator, executive producer and director more than a decade to get the project off the ground and a platform that would showcase a story portraying “Latinos with a sense of normalcy” that avoids stereotypical narratives. Valdez he hopes to change that dynamic by producing diverse and inclusive aspirational content through his company New Cadence Productions, co-founded with international business executive Sol Trujillo, who is also an executive producer on the show. The Garcias is the first original series produced by New Cadence Productions.

Valdez spoke about the journey that led to making The Garcias.

What was the biggest challenge in bringing the show back to life?

I spent seven years trying to get The Brothers Garcia rights for from Nickelodeon. When my friend Bob Bakish took over as CEO of Viacom, I flew to New York and convinced him to give me the rights back…Traditionally, they don’t let go of those rights. The good news is we now own the rights to The Garcias. When I called the cast and I said I got the rights back…every member of the cast said yes. After we sold it, we set about finding the new cast.

How does your vision for the revival of the show differ from the original?

It’s a continuation. George is now married to Ana (Nitzia Chama), Carlos is married to Yunjin (Elsha Kim) and Lorena is married to Julian (Paul Rodriguez, Jr). So, they all have gotten married and have kids. In the original episodes, it was three boys and a girl, now it’s three girls and a boy. We intentionally are giving a bigger voice to the female energy in the show.

Even though the original was on Nickelodeon, it really wasn’t a Nickelodeon show is a really out of the box experiment for Nickelodeon. I applaud Herb Scannell, the president at the time, who is half Puerto Rican and he got it. It was a family show. Nickelodeon has kind of done family shows, but always where the parents are idiots and the kids run the house. That wasn’t the case here, because if you did that Latinos would go that’s not how it works. Like the original, there are lessons learned in every episode. There’s actually a moral lesson in every episode. And I’m like not a religious or preachy kind of guy but, you know, in life we learn lessons about don’t lie don’t cheat, don’t steal. And those are all those were in every episode of The Brothers Garcia and there are in The Garcias…. although there are more adult situations.

Everything in the show is very authentic. We have complete creative and show control.

Why was it important for you to bring the original cast back?

They couldn’t get work in Hollywood [after the show ended] and it was tragic to me. And by the way, I couldn’t get work. We had a hit show and we couldn’t get work out of the show. So what are the odds of that? And it was in 50-60 countries. It did really really well. So when I asked them to come back, they were kind of like, are you sure you want to do this? We haven’t acted in a while. I said, it’s like riding a bike. You know the character. And several of the writers that I brought from the original series hadn’t written since the original series. Except one, almost all of our directors hadn’t directed TV. In my case, I hadn’t directed in 15 years.

How has owning your own production company helped in your creative process for the show?

I understand the business, but my amazing partner and mentor Sol Trujillo, who’s run three global telcos, understands it on another level…. We own our program. We’re one of the only, if not one of the few Latino-owned companies in town that own their content. Nobody owns their content anymore. It used to be that the Aaron Spellings of the world used to own their content. And then, once these companies started merging, everybody just works for the big media companies. You’re an indentured servant of sorts. You’re a well paid indentured servant, but you don’t own your own content. And quite frankly one show can create generational wealth. So one of the things we want to start teaching others is how can you own your own content. It’s not an easy path but there’s a path.

I have a lot of friends who have production companies but they don’t own their product. So there’s a distinction. What we’ve done is we’ve proven ourselves, because we’ve got three comedy specials on HBO Max right now.

Why is it so difficult to get Latino-themed shows made?

The other problem is non Latinos telling Latinos how to do a show. You have an executive telling you how to do your show and how to be Latino when they have no idea of our rhythm, no idea of our culture. How can you pretend to want to program us, when you know nothing about us?

The other thing is all the shows take place in East L.A., which is a great part of town. But there’s 60 million of us. We can’t all fit in that neighborhood. So let’s show the diversity. We had one guy say, why are they going to live in such a nice house? I’m like, what’s wrong with that? I live in Beverly Hills. My friend Pepe lives in Beverly Hills. I know people who live in Bel Air and Latinos who have nice houses. Can we tell those stories?

I came from the projects. My daddy didn’t inherit me this house. I left my house with a trash bag and everything I own when I was 17 years old. Everything I have, I earne. So I’m proud of that and we should all be proud of the fact that some of the poorest of the poor that came to this country and worked hard have put their kids in school and created a $2.8 t trillion dollar GDP. Imagine what their kids are going to do now that they’re college educated, bilingual and hungry.

What will it take to tell those Latino stories in Hollywood?

Well, it’s going to take a show like this to be successful, and I’m 100% confident it will. I feel very strongly that we’re going to get great reviews. This is a feel good show and you can watch it with your family or with anybody. Here’s a show that has no sex, no drugs, no rock and roll. It’s not preachy. It’s not corny. It’s something to be enjoyed.