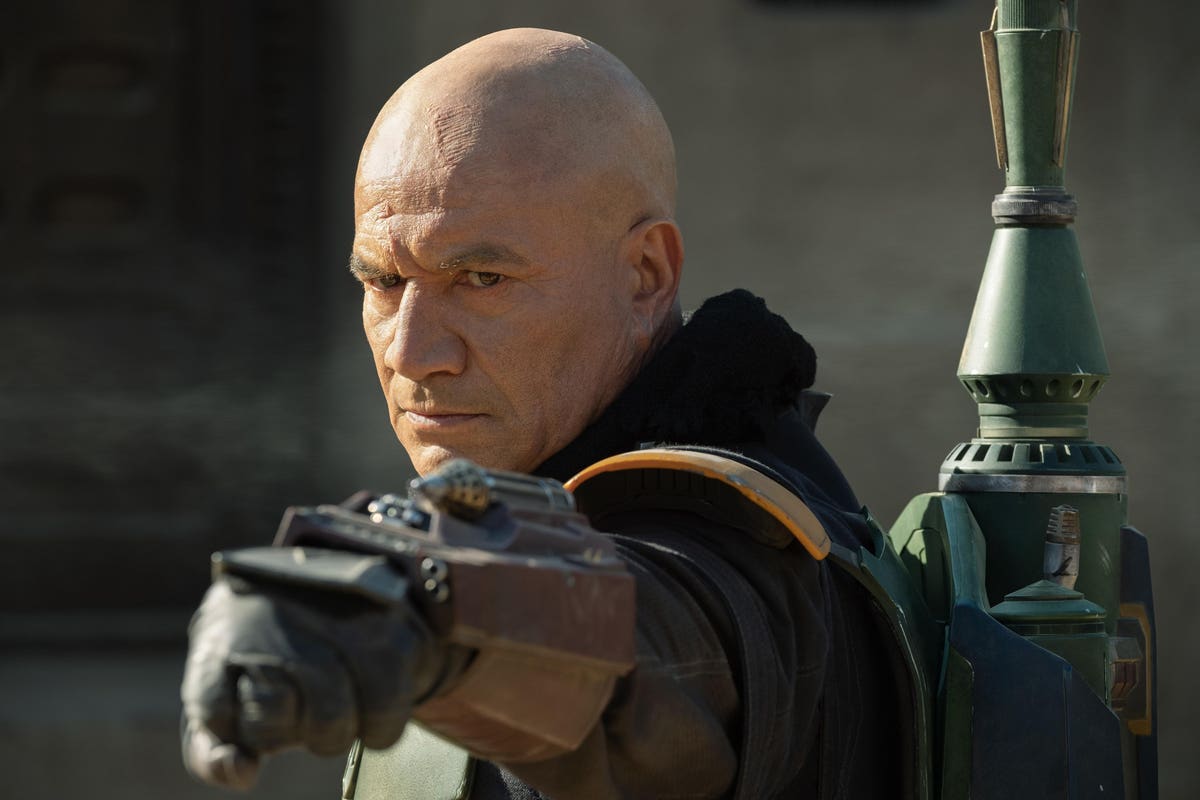 The Book Of Boba Fett has been pretty hit-or-miss so far. With just three episodes out, I have to admit that I’ve become deeply skeptical of the new Star Wars Disney Plus show, despite a very strong second episode.

You can read my review of Episode 1 (which was just okay) here, and my review of the far superior Episode 2 here. I didn’t write an episodic review of the third episode because I was so bothered by it that I needed some extra time to think about why the episode, and the show itself, are rubbing me the wrong way.

Let’s start with the bigger problems with The Book Of Boba Fett before moving to Episode 3’s issues. Mostly, my complaints with this show revolve around its titular character, Boba Fett himself.

First of all, Boba Fett is way too old in this show. In The Return Of The Jedi, Boba Fett would have been about 36 years old. We’re maybe five or six years past that film in the timeline, but Boba Fett is now in his 60s—actor Temuera Morrison was born in 1960, making him 61 years old. Somehow, upon emerging from the Sarlacc pit, Fett is now an old man with a paunch.

I’m not trying to be agist here, by any means. Morrison does a fine job in the role and the show in general proves that people in their late 50s and older can still be badasses. Fennec Shand actor Ming-Na Wen was born just two years after Morrison, which still blows my mind. I’m not sure how anyone looks that good at 59.

But the age here is a problem from a timeline perspective and I can’t get past it. The Boba Fett who got knocked into the pit during Luke and Han’s grand escape emerged 20 years older somehow and it’s weird.

Grandpa Boba Fett is just . . . an odd choice for this timeline. If he’d come back to Tatooine decades later to become Daimyo, no problem. But this takes place just after the events of The Mandalorian’s second season, so just a few years after Return of the Jedi. It just doesn’t work! Even if we could look past it in Mando’s show, it’s much harder here.

Maybe “Grandpa” isn’t the right word. Maybe we should take a page from Gravity Falls and call him Grunkle Boba. I like that.

Grunkle Boba is all wrong for a show centered on a notorious bounty hunter. For one thing, he’s not a bounty hunter at all. He’s a bizarrely naïve would-be Daimyo of Mos Espa, the lesser known cousin-city of Mos Eisley.

The Boba Fett we knew in the original Star Wars trilogy was the strong and silent type, lurking in the shadows, ready to work alongside Darth Vader and Jabba the Hutt without batting an eye, which we never saw because he was always hidden behind that Beskar Steel Mandalorian helmet.

In every single possible imaginable way, Mando seems more like Boba Fett than Boba Fett does. It’s weird. He’s the bounty hunter. He’s the strong, silent type. He’s about the right age (actor Pedro Pascal is in his mid-40s).

This, and the generally less-compelling plot, all makes The Book Of Boba Fett feel a bit too much like poor man’s Mandalorian. It can be interesting, especially in its Dances With Wolves segments, but it can also feel a bit forced.

Which brings us to Episode 3, which somehow manages to be just the third episode but also extremely anticlimactic all at the same time.

In the second episode, we were introduced to the Twins—two debaucherous Hutts carried around on a litter, incestuously intertwined with one another. The pair arrived in Mos Espa to claim their cousin Jabba’s throne. They brought with them Krrsantan, an evil Wookiee bounty hunter who’s crossed paths with other famous Star Wars characters in the past.

MORE FROM FORBESWho Is The Evil Wookiee In ‘The Book Of Boba Fett?’ Black Krrsantan ExplainedBy Erik Kain

Episode 3 dispenses with all these characters. The Hutts give up their claim to Mos Espa—apparently because the mayor has conspired with the Pyke Collective to give them control instead. The Pyke Collective is the international spice smuggling ring that the Tuskens and Boba Fett fought in Episode 2, taking down their glider train and demanding tribute for all passage across the desert.

We learn that Boba has bones to pick with these fish-aliens. In the past timeline, he goes to collect the tribute only to be sent away, told that the Pyke Collective won’t pay the Tuskens and the biker gang. When he returns to his adoptive tribe, he finds them all dead, killed by the biker gang he easily beat up single-handedly not that long ago.

So much of this is anticlimactic. A showdown with the Hutts, a familiar but largely unexplored (in film) race of powerful alien criminals, would be way more exciting than this goofy Pyke Collective. And having the Tuskens who we just came to know and who just barely welcomed Boba into their tribe all get killed off off-screen is just lame. I get the tragedy of it, and how that can fuel Boba Fett’s anger, but it seems too sudden and unearned.

Moreover, this just makes me think how much better a Boba Fett show about revenge would be. This clumsy “I want to be crime lord” story has not found its feet at all so far, but a more straightforward story of revenge, with Boba Fett a darker and more vengeful version of Mando, could have been really great.

Speaking of dark characters, Krrsantan does manage to make a rather shabby assassination attempt on our Man Who Would Be Daimyo. He fails miserably, largely thanks to the intervention of both the Gamorreans and the scooter kids.

Sure, the Wookiee puts up a good fight, but it still felt like a letdown. He’s not very smart. I have no idea how he got into Boba’s inner chambers unseen. He’s just there all of a sudden. The ensuing fight is ho-hum at best. And when the Hutts show up to announce that nevermind they’re just giving up already, Boba Fett doesn’t keep Krrsantan prisoner or offer him a job as hired muscle. He just let’s him go.

Look, I don’t want this to be The Punisher as some have suggested. But I also don’t think this gentler, kinder Boba Fett is very compelling, or really how anybody imagined the notorious bounty hunter.

Surely there’s a better middle ground somewhere. Boba Fett doesn’t have to rule like Jabba, but that doesn’t mean he should spare everyone all the time. Surely being the boss of a crime organization demands some element of ruling with fear. It’s crime. If he wants to rule with respect he should start a bakery or something.

The scooter kids are another problem that highlights where this show goes wrong. While The Mandalorian always felt incredibly in-tune with the Star Wars aesthetic, these scooter bikes look like something from Back To The Future II. I mean, I’d drive one for sure, they look fun. But they look like they’ve been plucked from an entire different universe and dropped down into Mos Espa as a bad joke.

All told, I’m pretty skeptical of where The Book Of Boba Fett is headed after Episode 3. I’m not a huge fan of wild variations in quality between episodes, but that’s how this feels so far. Episode 1 was fine. Episode 2 was great. Episode 3 was bad. What can we possibly expect from Episode 4? I’m not really on the edge of my seat to find out the way I was with The Mandalorian, even though that show also had its better and worse episodes and a little too much meandering.

This show sits in that show’s shadow, and Boba Fett himself is too much the kindly grandfather figure and not enough the frightening badass he needs to be. Don’t get me wrong, I loved the new Rancor and its surprising trainer (Danny Trejo!) and I’m happy he wants to learn to ride the beast. But I guess I never pictured Boba Fett fondly scratching a Rancor’s head when I imagined a Boba Fett TV show. What can I say?

Without some major improvements in coming episodes, this is looking to be a pretty big letdown all around. I very much hope I’m mistaken.

Check out my video on this subject below:

What do you think of The Book Of Boba Fett so far? Or, as I like to call it, The Gratuitous Adventures Of Grunkle Boba: A Star Wars Story.

A reader reminded me of this gem. Enjoy!