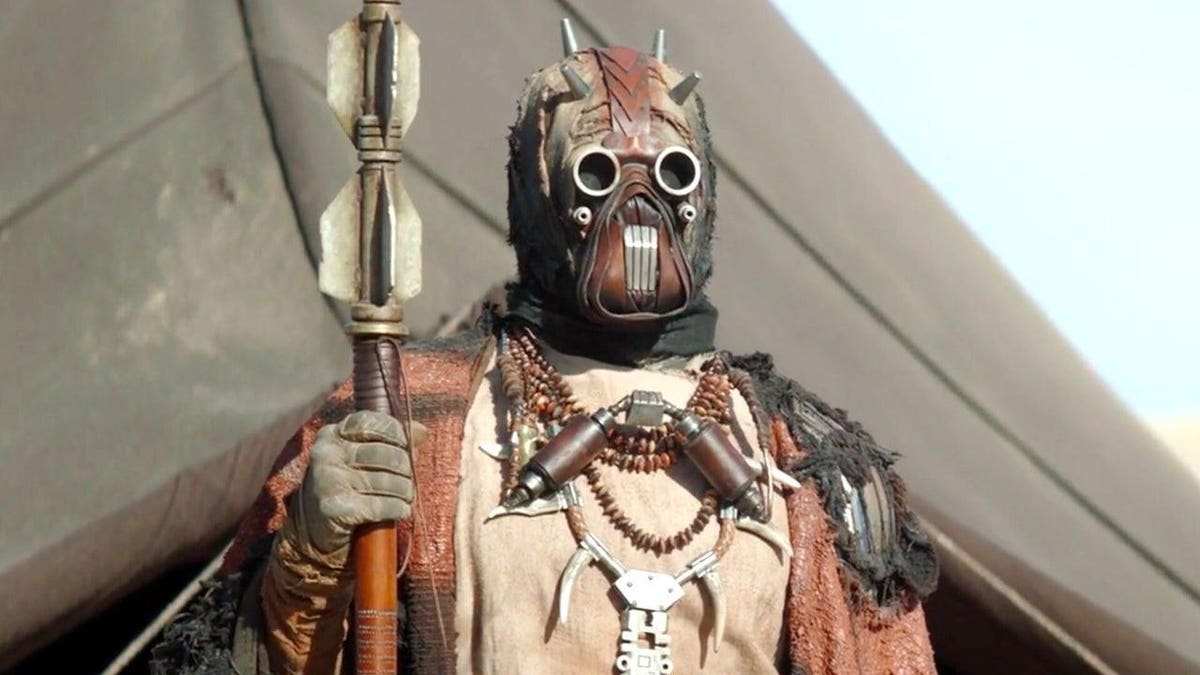 The Book of Boba Fett started off a little slow in last week’s series premiere.

It’s been—understandably, if unfortunately—compared to The Mandalorian’s Disney Plus debut, and mostly in an unfavorable light.

Most critics liked it just fine and, other than one bit of rather shameless clickbait, simply didn’t think it was as good as Mando’s opening episode.

And how could it be?

That Baby Yoda reveal was way too epic to top. Turns out The Book Of Boba Fett doesn’t need to top The Mandalorian. It just needs to do what it did in Episode 2: Provide some awesome action and expand the fascinating Star Wars underworld into live-action TV.

Episode 2—The Tribes Of Tatooine—is fantastic, every bit as good as some of the best episodes of The Mandalorian.

Like last week’s episode (here’s my review) Episode 2 is split between two timelines. Unlike last week’s episode, we don’t hop back and forth a bunch. We start in the “present” timeline, in which Boba Fett (Temuera Morrison) is trying to secure his power as Daimyo, and we get the flashback timeline, in which Boba Fett is securing his place among the Tusken Raiders. We’ll go in order.

He won’t say who sent him, however, and the 8D8 (Matt Berry) droid (which sounds like a roll in Dungeons & Dragons) says that they won’t be able to make him. The Night Wind assassins are too highly trained—though Fennec says they’re overrated.

When even the threat of death does nothing to loosen his tongue, Fennec threatens him with the Rancor. She clicks open the trap door and he falls into the pit. Of course, there is no Rancor, Luke having killed him several years prior, but the assassin doesn’t know this. He’s terrified and blurts out, “The mayor! The mayor sent me!”

And so off they go to visit the mayor of Mos Espa. All signs point to the mayor being behind the attack. The ominous visit from his majordomo. The assassin’s confession. The lack of tribute.

When they arrive, the mayor isn’t at all what anyone expected. He’s an Ithorian named Mok Shaiz, and he tells Boba Fett that he needs to rethink his assumptions. Someone sent those assassins, but it wasn’t him.

Mok Shaiz sends Boba Fett to Garsa Fwip (Jennifer Beals) to find answers. When he and his small entourage arrive at her fancy cantina, Sanctuary, she seems nervous. Fett asks why and she tells him ‘the Twins’ are coming for their cousin’s throne. But the Twins are busy with affairs in Nal Hutta, Fett says, confused.

That’s when drums start beating. They walk outside and are greeted with the sight of a huge litter, carried by over a dozen litter-bearers. Atop the burgeoning frame sit not one, but two Hutts:

The brother-sister combo is grotesque—Lannister twins turned into massive slugs, basically, their massive bodies entwined on top of the litter.

The Hutts have come for Jabba’s things. Namely, his crime empire. But Boba Fett isn’t about to budge. When the sister tells her brother she thinks they should kill him, Fett says she’s right. They’ll have to kill him if they want to take his territory.

So they show some muscle in the form of a very nasty looking Wookiee. Boba Fett doesn’t bat an eye. He’s not afraid of “gladiators.”

The Wookiee is actually a previously established Star Wars character from the comic books called Black Krrsantan. (I’ve written a helpful explainer about him, and why he’s important to another major Star Wars character, so give that a read).

The Hutts leave when Boba Fett won’t back down, but I think it’s safe to say that they’ll be back and in greater numbers.

After this encounter, Boba Fett returns to his healing water pod thing and we get another flashback.

The bounty hunter has been welcomed into the Tusken Raiders’ tribe. Here, they teach him how to fight with one of their spear-staves, called a gaderffii.

He’s no match for the Tusken trainer—a warrior played by Joanna Bennett simply credited as “Tusken Warrior.” (There is also the Tusken Kid and Tusken Chieftan). But he’s a quick learner, and soon has the art of the gaderffii down.

As he trains, an alarm is called and we see something racing across the desert. At first I thought this was a giant worm like the one we saw in The Mandalorian (or Dune) but it turns out it’s a giant, floating train.

As the train passes, the Tusken Raiders hit the sand, grabbing rifles and toppling Banthas to use as cover. Both the guards on the train and the Tuskens open fire, but the train has the upper hand thanks to being a moving target and heavily armored.

This gives Boba Fett a plan. He heads to Tosche Station (Easter Egg alert!) where we encounter some old friends of Luke Skywalker’s—Laze Loneozner, also known as Fixer (Skyler Bible) and Camie Marstrap (Mandy Kowalski) who are still apparently hanging out at Tosche Station all these years later. (Where Biggs Darklighter is at this point remains a mystery).

Note: Most of this stuff is gleaned from cut A New Hope scenes. George Lucas originally had more Luke backstory / social life stuff planned for Star Wars but it was all axed (which is probably for the best). Fun Easter Eggs, though!

In any case, some biker gang is here harassing everyone and Boba Fett shows up just in time to save Fixer from a beating. Instead, the gang takes a beating, with Boba Fett beating the crap of six or seven big, ugly alien dudes. It’s all part of his plan to take down the train—with speeder bikes.

He steals the biker gang’s speeders and hauls them back to the Tusken Raiders, whose first instinct is to dismantle the bikes. He stops them, saying that this is how they can stop the train, and then proceeds to teach them how to ride. It’s a comic sequence in an otherwise mostly dramatic episode.

Next up: the taking of the train, which Boba and his Tusken pals do with style. It’s a terrifically fun action sequence—the old Western train robbery turned on its head—and ends with a Fett victory.

It turns out the train is one of the Pyke Syndicate’s. This is the intergalactic crime ring that smuggles spice (more Dune stuff!) on planets like Tatooine and Kessel. The Pyke species—with their fishlike faces—had a hand in the attack on Mandalore and were involved with the powerful crime organization Crimson Dawn.

Boba Fett let’s the survivors live, on the condition that they go back to their masters with a message. Any shipments of spice that travel across the Great Dune Sea must be accompanied by a tole paid to the Tusken Raiders.

This earns Boba Fett his place in the Tusken tribe. They send him on a spirit quest by having a hallucenogenic lizard crawl into his head (don’t do drugs, kids) and he comes back carrying a sturdy branch after having some truly trippy waking dreams.

He’s given a badass black cloak and is taught to transform the branch into his very own gaderffii—the same one we see him using on Stormtroopers in The Mandalorian.

The episode ends with Boba and the Tuskens dancing around a fire with their gaderffii, chanting and jubilant after an epic victory. Whereas the Sand People merely worked alongside Mando to stop the Krayt Dragon, they’ve actually adopted Boba Fett into their tribe here. It’s pretty cool.

All told, a really stellar episode. It’s so much fun to see the universe expand in ways that feel truly natural and so very Star Wars. New Hutt villains, an evil Wookiee bounty hunter, more personality for the Tusken Raiders, this is all exactly what I wanted to see in The Book Of Boba Fett, and so far I am not disappointed.

Some people see this as a weakness with these Disney Plus Star Wars shows, disdainfully handwaving away all these little Easter Eggs and encounters as little more than fan service. Well, I think after a disastrous prequel series, a mediocre sequel series and decades spent waiting for content like this, a little fan service is in order. And it’s in-keeping with all the animated stuff, which is cool.

Read my review of Episode 1 here.