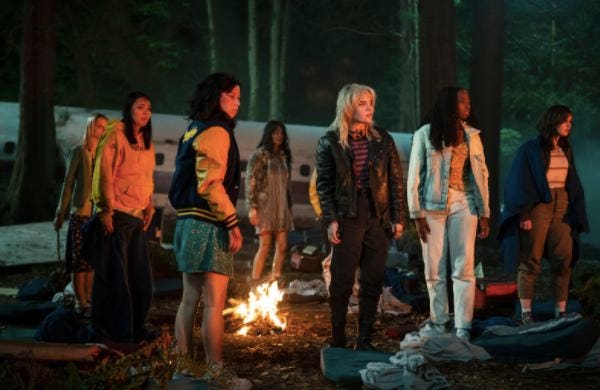 If she was to become stranded in the wilderness, Christine Ricci feels like she would know what to do.

“I’m personally a huge survival TV fan,” she says, “I know how to do pull-ups, because I know if you fall off a cliff, you need to be able to pull your body weight onto things. So, I would actually do very well,” she says with a slight laugh.

She may not exactly need that knowledge for her new show, because it’s a scripted series, but it is all about survival.

Ricci and a bevy of actresses star in Yellowjackets, a drama about a high school girls soccer team who survive a plane crash deep in the wilderness. The series chronicles their descent from a thriving team to a cannibalistic clan, while also tracking them years later as they attempt to move forward in their lives.

Lynskey says that she was drawn to the project because, “honestly, I just was so excited to read something that was so different. There was a genuine edge to this, and I really loved [that] it was so female centered; the story really got to the heart of female relationships.”

Lewis agrees, adding, “This script was one of the best scripts I’d read in the last ten plus years. It was absolutely riveting on the page, which is so rare. And I’m always interested in dichotomies or contrasts and all these multi-layered problems within a human being.”

For Nélisse, her interest was heightened by the extreme conditions examined in the series. “I think we’ve all imagined what it would be like to be facing a life and death situation. It brings out the worst in us, but also the best in us. We all think we know ourselves, until we’re put in this situation. [So], just to see how far these women will go is just very interesting.”

Playing the same character, Lewis and Thatcher connected in a unique manner, says Lewis. “Sophie and I, we would just share music. We had old music swapping that was fun.”

“Music was a really big thing for me, because I think it’s really important to her,” says Thatcher. She also recalled, “one of our first phone calls how [Juliette] talked about how the way that [our character] dresses is just so important. We were just on the same path.”

Working with their younger counterparts was inspiring, admits Lynskey. “seeing the [them] and how much talent there is, and [seeing] people who are just so full of enthusiasm and that their voices are so strong.”

Crafting the narrative, Creator/Executive Producer/Showrunner Ashley Lyle says that, “we knew we didn’t want to be a show about what happened, but about why it happened. And, what was interesting to us about having it be a championship soccer team is that it’s all about collaboration.”

She adds, “Spoiler alert: [this is ] not really a soccer show. It’s about how these girls were able to really work together as a group, and then to see how that might really start to fall apart and shatter over the course of a season. “

Director Karyn Kusama give her take on the series, saying that it’s, “asking a larger question.”

She explains her thought-process with, “to go from keggers and carpools and winning a soccer match in high school, to something so extreme, it begs the question of ‘What are people capable of?’ So, it creates this internal suspense and an internal set of questions that help drive the whole series.”

With this in mind, Kusama feels that what Yellowjackets is truly exploring isn’t just about survival, it’s really about “the mysteries of human behavior.”

‘Yellowjackets’ airs Sundays at 10e/p on Showtime and is available for streaming at Showtime.com.