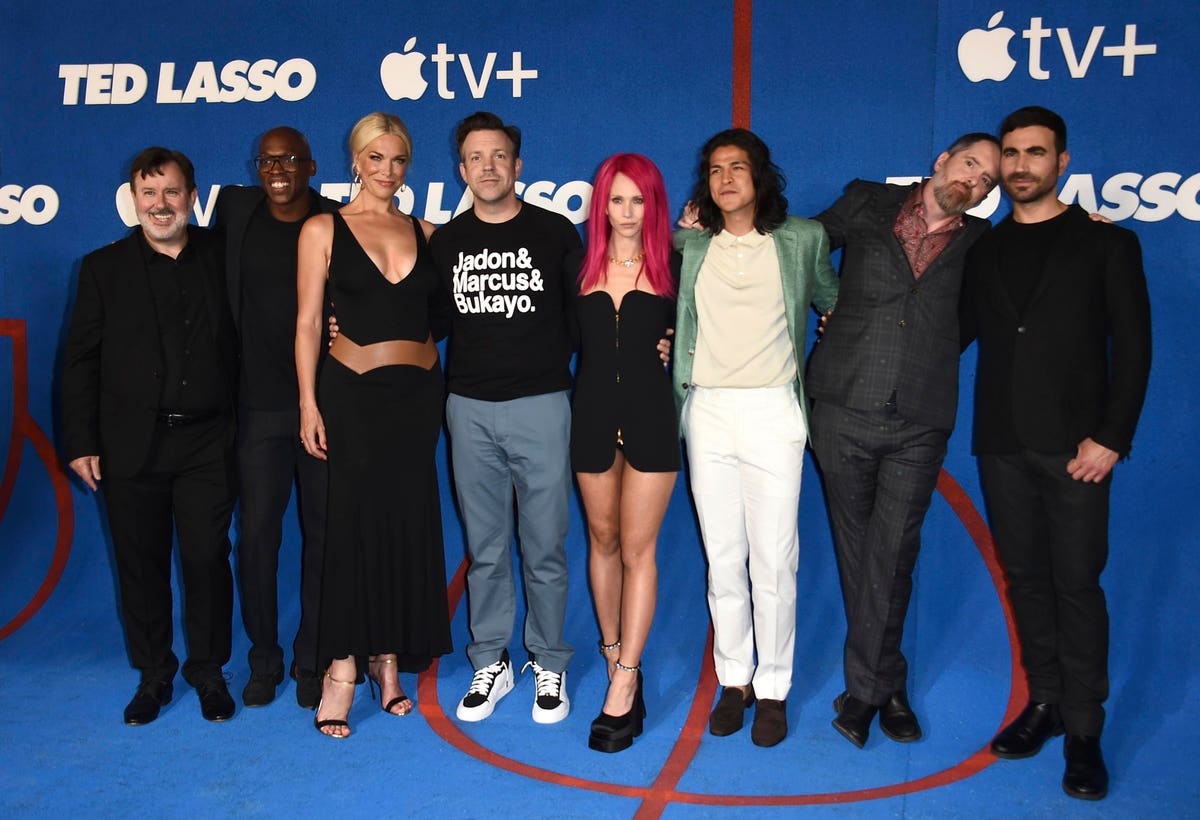 As Jason Sudeikis huddles outside the club after the first attack, moments after escaping the chaos and loudness of the karaoke scene, you feel his panic as he looks for a way to steady himself.

That was the idea, of course, when filming the scene. Two sound editing veterans, Supervising Sound Editor Brent Findley and Dialogue Editor Bernard Weiser, who both received Emmy nods for their work on Ted Lasso, worked hard to bring audiences into Ted’s world for those moments.

“Picture Editor Melissa McCoy did a wonderful job of assembling the visual sequence that follows Ted succumbing to the attack, leaving the club, and collapsing into an almost-fetal position on the ground, and then being brought out of it by Rebecca,” Findley says. “The full experience is brought to life by the sonic elements accompanying the picture, landing it as being from Ted’s point of view…the audience experiences what Ted is experiencing in his mind.”

In the scene, a ringing sound builds as the bar crowd fades away, and with it, Rebecca singing Let It Go. The audience experiences Ted’s sensory overload as he staggers out of the bar.

You can hear Ted’s son and (newly) ex-wife calling to him in his head, and then suddenly Rebecca is there, “led by a sonic ‘suck’ sound marking the return to the concrete world around him as the image of Rebecca’s face comes into focus,” Findley explains. “The sum of the visuals plus all of the sonic elements combine to take the audience on an emotional trip. So much of the sound work is being done just below the surface.”

He and Weiser note that if they’re doing their jobs well for scenes like that, no one notices.

“The prime directive Is to have the mechanics of our work be invisible. If the audience isn’t conscious of what we’ve done but is moved in some way by what they’ve experienced, then we have succeeded in our jobs of serving the story with sound for picture,” Findley says.

Weiser says for Ted, story is paramount to figuring everything else out. Sound supports story and moves the plot forward.

“It always comes back to story, you know—just like real estate is location, location, location, in film or TV it’s story, story, story,” Weiser says. “Ted is not just a simple comedy. In the end, it’s, in fact, not about the comedy The comedy is a great setting and people love it, but really what hooks you into this story is the relationships. It’s much deeper.”

Of course, the other thing overlaying production of every show over the past 18 months has been COVID, and that impacted seasons one and two of Ted, too. Findley and Weiser had to ship recording equipment to the actors and had them record dialogue at home in their closets, something that has since gained traction as a convenient idea for the post-COVID era, too.

“What’s funny is that this is almost standard now. And something that will continue well past the pandemic, in fact, because it can,” Weiser says. “It works well with actors that are on location, who can’t come into a studio for one reason or another, but it was just choosing something that was easy to operate, easy for the actors to use if they’re not, you know, technically savvy to how this all works.”

This approach included redoing part of the song Rebecca (Hannah Waddingham) sang in the karaoke bar.

“There was a particular phrase of the song in the production that bumped Hannah as not being up to her very high personal standard of performance. She knew she could do better,” Findley says. “She rerecorded the song in her bedroom and sent it to us. Then we excised just the bit of the original production that she didn’t like, replacing it with as little of the new recording that we could get away with and still meet with her approval. In the final soundtrack, the majority of what you hear her singing was done live on the day of production, but there is a little bit that was done many months later. The secret as to which bit will go with me to my grave.”