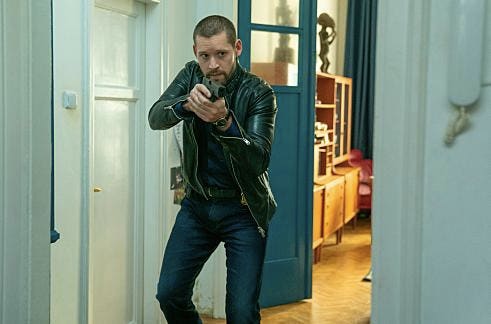 “I think when you become a writer, especially in fiction, you’re just constantly looking around with your eyes and ears open thinking, ‘what could happen here? what are those people over there talking about?’”

This is the thought-process that led to the upcoming episode of FBI: International that finds the team of investigators working to uncover the truth when an American journalist is poisoned in Poland. The episode is entitled, “The Soul of Chess.”

Haas gives a few more details about the episode, explaining, “The story starts with a journalist who is target, poisoned, and dies. So, our FBI agents head to Poland to figure out exactly what happened, including, what was the story he was after, who else is involved, was this politically motivated, and things like that. There’s a lot of delicate untangling that goes on.”

The idea was born of the fact that the role of the media has become a hot topic of conversation, says Haas. “The last five years, really, journalists have been called the ‘Enemy of the People’ and things like that, and the role of investigative journalists has gotten so dangerous that we thought that was a truly timely story to tell.”

He goes on to say that his intrigue with what field reporters experience fueled this story as well. “You know you’re watching these overseas investigative journalists, seeing where they’re reporting from – right in the middle of maybe a very sketchy situation – and it gets you to thinking about what happened ten minutes before their live shot and what they’ll face ten minutes after they go off the air. It’s because they’re willing put to themselves in these situations that I’m always on the side of journalists, so I was happy to tell this story.”

Ahead for the team, says Haas, is an episode centered around nuclear enrichment talks between countries. He explains the narrative a bit more, outlining, “When you have these talks, often our Secretary of State will go and meet with another high level foreign official and you’ll see the Secretary of State walking out and there’s ten or so aides behind them who’ve got these briefcases and the binders and all of that, so we thought, ‘well, what would happen if one of those people went missing?’”

He says that researching this notion, and other storylines, has been a bit scary “When you’re delving into the world of the FBI and threats and security and all of it, you don’t necessarily want to know this information but you have to know it to tell the story accurately, and, yeah, it’s a little frightening to learn some of these things.”

Swinging away what makes him uneasy, Haas says, almost gleefully, that the element of the series that is most exciting to him has to do with interrogation techniques. “There’re like ten different methods the FBI team uses based on who the person sitting across from them is. I just think that all those different approaches make that part of the show extremely interesting.”

Describing how he feels about actual FBI agents and the characters inspired by them, Haas says, “Well, you’ve got these brave men and women, but they’re certainly not perfect, but they’re out there doing their best for this country and everyone in it. I’m always impressed when I meet real FBI agents. They really are the best of the best.”

Overall, Haas wants viewers to know, “What we’re not trying to do is an ‘educational-entertainment’ type of thing here. Our goal is to give you a fast-paced, thrilling, dramatic show. Then if we can fill the hour with little facts that you just wouldn’t have known had you not watch this show, then that’s a home run for us.”

“The Soul of Chess” episode of ‘FBI: International’ airs Tuesday, November 2nd at 9pm e/p on CBS. Future episodes of the series air in the same time slot and all episodes are available for streaming on Paramount+