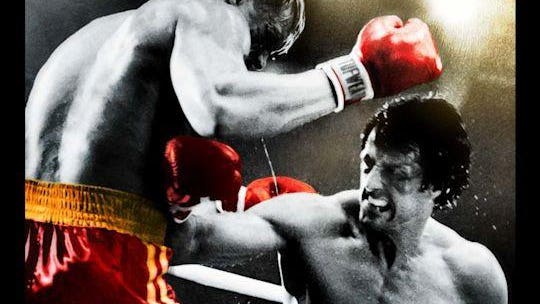 Just over a year after confirming via social media that a director’s cut of Rocky IV would be arriving in time for the film’s 35-year anniversary (false), we now have a trailer and a one-night only theatrical release for the blockbuster’s 36th anniversary. Yes, for those so inclined, Fathom Events is offering a theatrical showing of this 40-minute-longer (!) version of the fourth Rocky movie on November 11 at 5:00 pm (before being available on digital and on demand the next day). As noted when the existence of this cut was first announced exactly 13 months ago today, the Stallone-directed sequel opened with a then-massive $19.9 million Fri-Sun frame over a $31.77 million Thanksgiving weekend in 1985. It would gross $127.8 million domestic and $300.4 million worldwide on a $30 million budget.

Sans inflation, it is Stallone’s second-biggest domestic earner behind Rambo: First Blood part II ($150 million domestic and $300 million worldwide that previous summer) and his second-biggest star vehicle global grosser behind Expendables 2 ($312 million in 2012). As such, in terms of inflation, it’s almost certainly Stallone’s biggest “tickets sold” worldwide success. Rocky IV was my first favorite movie, from back when I was five years old, and the film that indirectly made me into a movie nerd. So you bet I already have tickets for this one. Whether or not we lose Paulie’s pet robot (as Stallone has threatened), I honestly have no idea what to expect from this thing.

The film as it exists is a barely-90-minute sprint, with so many music video montages (set to a definitive 1980’s movie soundtrack of “movies written for the movie” bops) that it arguably qualifies as a musical. I am curious to see if we lose some of the montages, as some of those snippets (aside from the flashbacks obviously) get expanded into actual scenes. While Rocky IV isn’t quite “good,” it tells the entirety of its story (during which Carl Weathers’ Apollo Creed dies in the ring against Dolph Lundgren’s Ivan Drago setting up a Rock v. Drago match in the U.S.S.R.) in a brisk 85 minutes.

Rocky IV, the 1985 theatrical cut mind-you, remains a fascinating cultural touchstone. It co-exists alongside Rambo: First Blood part II as a kind of “the Cold War in a nutshell” Hollywood artifact. The Rambo movie (initially written by James Cameron) shows Stallone waging bloody war on the pesky Commies overseas. However, the Rocky movie shows him making peace with our Cold War enemies while acknowledging that the system was the problem, as opposed to the people. As such, it’s frankly a shame that Rocky IV didn’t have quite the pop culture legacy as First Blood part II. Nonetheless, the one-two punch represented the peak of Stallone’s fame and drawing power.

In terms of “marquee character = movie star,” Rocky and Rambo were the two biggest stars in Hollywood. Those two franchises shined right during that moment when Star Wars was done, Indiana Jones was on a break, James Bond needed a jolt and Batman was waiting in the wings. Stallone serves as an accidental pioneer of modern stardom, as he went until maybe Cobra (1986) or Tango & Cash (1989) without a single real non-Rocky/non-Rambo hit. Even his mid-1990’s comeback consisted of one smash (Cliffhanger), one “good enough” grosser (The Specialist), one lower-budget win (Cop Land) and a bunch of “not bad, but they cost too much” actioners (Demolition Man, Assassins, Daylight, Judge Dredd, etc.).

That’s not a quality judgment, as I’d argue Demolition Man and Nighthawks are two of his best movies, but the audience wasn’t there. Save for the Expendables movies, Stallone’s box office stardom almost entirely consists of Rocky and Rambo movies. Rocky Balboa is a fascinating “movie star” character as he’s among the few pop culture icons who isn’t primarily a man of action or violence. Yes, he boxes, but it’s a sport or occupation and he’s absolutely a nice, kind and decent guy in and out of the ring. Again, it’s a shame that the benevolent boxer was outshined by the vengeful warrior.

Steven Caple Jr.’s Creed II pitted Michael B. Jordan’s Adonis Creed against the son of Dolph Lundgren’s Ivan Drago, the man who killed Apollo Creed in the ring during Rocky IV. And, yes, it made for a surprisingly good Batman Beyond: Return of the Joker. That’s just one reason why Creed II made even more ($214 million worldwide in 2018) than the first Creed ($173 million in 2015). I still maintain that Creed II was as good as it was (an engrossing three-star sequel to a four-star predecessor) precisely because it didn’t use the Rocky IV nostalgia as an excuse to go half-assed. Instead, Capable, Coogler and friends used the goofy hook as a challenge.

I don’t know why I was entranced by Rocky IV as a five-year-old, but something about the color scheme, the music and the boxing (which was always PG-safe in terms of blood and punishment) hooked me. That’s not the say the movie is “good,” but it’s completely entertaining and I’d put it above Rocky III partially to lacking that film’s icky (if presumably unintentional) racial subtexts (something that, right or wrong, bothered me even before I was old enough to know why). That Rocky IV was used as a basis for Ryan Coogler’s Creed is a modern miracle, like if Batman & Robin served as the basis for a terrific and grounded Batman Beyond movie. Come what may, if anyone needs me on November 11, I’ll be in Woodland Hills.