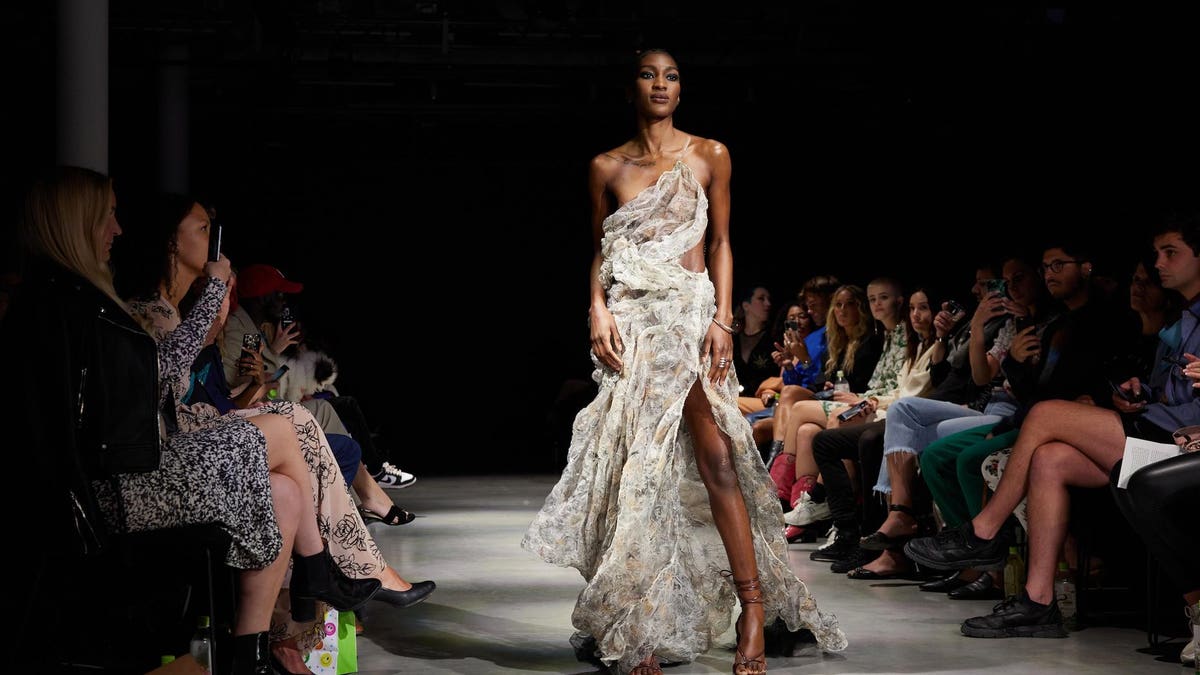 The new and improved Stockholm Fashion Week made its IRL debut August 31 through September 2, demonstrating leadership in sustainability. After a brief pause, the week reemerged in early 2020 with primarily digital presentations for the August and February 2021 installments. With the help of vaccines and Sweden’s nonchalant approach to Covid-19, the Spring 2022 season hosted physical shows, events, showroom appointments and dinners to European and American press. Under leadership from Caterina Midby, secretary general of the Swedish Fashion Association, project manager Naira Abdul-Halim and a team of freelancers and volunteers, the event established the key role that Swedish designers and brands have in setting the the sustainable fashion bar by pioneering practices large scale and committing to change. Further, the event cemented core values that intersect at Stockholm Fashion Week: sustainability, technology and creativity.

Midby and Lena Patriksson Keller introduced the third installment of Fashion Future (formerly Fashion Tech Talks) hosted by Patrick Duffy of the Global Fashion Exchange to kick things off. The conference packed a lineup of some of the biggest names in the sustainable fashion sector. The leadership theme included global thought leaders and speakers for the movement such as Maisie Williams, actress and H&M global sustainability ambassador; Federica Marchionni, CEO of the Global Fashion Agenda; Anita Balchandani, Partner McKinsey London; Alice Bah Khunke, Swedish member European Parliament; Simon Collins, founder House of Collins along with Oskar Metsavahat, founder Osklen and Instituto-E and UNESCO sustainability ambassador who attended the conference either virtually or in-person.

Universally agreed upon are several issues plaguing the industry: overproduction or misjudging consumer desire; waste material and toxicity prompting a need recycling and safe ingredients to ramp up; and E-comm systems that negatively affect the planet, particularly through returns and transparency of a garments life. The solutions to these issues will rely heavily on tech, legislation, financing, and collaboration across the industry notorious for not working together. It is also highly unregulated. Thus, the industry needs to make strides to change either from a moral obligation or demand imposed by the consumer. Groups such as STICA—The Swedish Textile Initiative for Climate Action, whose founder and executive director Michael Schragger spoke at Fashion Future—offer a blueprint on how brands can take positive steps towards reducing their greenhouse gas emissions ad be held accountable.

Topics ranged from tech developments such as building machinery to improve textiles from hemp; how science and tech meet to replace toxic black ink by developing a carbon-based ink from pollution; and the ways AI can play a role in reducing overproduction and tools to aid consumers with sizing, for example. Governments (and voters) need to impose stricter regulations and how financers can solve these issues. Amanda Parkes, Chief Innovation Officer of Pangaia, and Danica Kragic Jensfelt, a professor of Computer Science at the Royal Institute of Technology discussed science and tech intersecting suggesting plants such as bamboo and eucalyptus can create a new flower-based down to replace synthetic or traditional down filling or how tech can help you ‘feel’ a fabric.

Another panel suggested looking to the automotive industry as an example of collaboration to change the sector, while another proposed legislation incentivizing investors to finance changes. Williams implored industry leaders like sponsor H&M to standardize sustainable practices to become affordable to smaller brands as currently, many of these steps to reduce environmental impact are costly. She also suggested that tech could further the consumer’s engagement via ‘Fitbit -like’ tools to measure carbon footprints.

Fast fashion has been labeled the industry’s worst culprit and the world’s largest fashion brand has contributed to clothing waste issues, as famously chronicled in a 2010 New York Times article. However, it’s crucial to note Swedish retail giant H&M has financed several sustainable initiatives and companies. Case in point, they invested in Renewcell, which recycles textiles into a new pulp spun into fibers to become viscose and Lyocell along with other upcycling and recycling companies

H&M CEO Helena Helmersson detailed additional steps the company has taken combat the problem. The Swedish giant was among the first to implement an eco-conscious collection, sourcing organic cotton. By pioneering this textile, they helped reduce the sticker price so that other companies could follow suit. Additionally, they have implemented clothing collection sites in stores, rentals for select merchandise, body-scanning technology to create the perfect (read non-returnable) denim jeans and installed the LOOOP-technology system in select stores that remake garments on site.

After the half-day conference, shows and presentations got underway, with several notable brands demonstrating their sustainability commitment as a natural part of their business models. There was a designated sustainability hub open to the public, although almost every brand at Stockholm Fashion Week could boast eco-friendly aspects. Following are highlights from several brands.

House of Dagmar: Sisters Sofia Wallenstam, Karin Söderlind, and Kristina Tjäder carry on the family tradition—grandmother Dagmar was a tailor—with their collection of relaxed luxury which veers off traditional classic silhouettes for a decidedly modern approach with wardrobe building in mind. The clothes are rooted in sustainability practices. In February 2021, House of Dagmar was awarded the inaugural Zalando Sustainability Award for its attention to eco-friendly fabrics and tight-knit production methods.

Lazoschmidl: Josef Lazo and Andreas Schmidl released six womenswear looks during SFW. Borrowing the men’s collection theme “Overdose” shown at Paris Fashion Week, the duo played with the idea of copy, both in terms of previous collections and written text. For this delivery, they engaged close colleague Ana Hernandez for the rave-ready pieces. The final look had “Pre-Order Now” written across, emphasizing the industry trend of ending over-production.

CDLP: When founders Andreas Palm and Christian Larson decided men needed better looking and better fitting underwear, they launched a brand. They named it CDLP, which stands for “Cadeau de la Providence,” in French or a gift from the universe translated loosely. Today, the CDLP universe includes loungewear, pajamas and swimwear, and men’s underwear, all made from sustainable fabrics such as Lyocell and other recycled materials.

Beckman’s College of Design and Swedish School of Textiles student showcase: The next generation of designers to emerge from Sweden’s fashion institutes displayed their senior collections via a film and mannequins in a joint effort. Each designer employed a version of sustainability, whether it be recycling, upcycling, or deadstock fabrics, proving the next generation of designers is ready for sustainable fashion. While each deserved an A for their effort, prizes for one student at each school were awarded. Ronja Berg from Beckman’s for her bemusing upcycled accessories-turned-garments and Kristine Boström from Swedish School of Textiles for her edgy yet commercially viable collection of patched seamed and raw-edge clothing.

Filippa K: When the brand was launched in 1993, it was Sweden’s answer to Agnes B. and aimed at making simple, practical everyday stylish dressing stress-free. Today the timelessness of the designs is innately sustainable. The brand established FK Studio, which has begun to upcycle pieces donated back to the brand as part of their customer recycling initiative launched in 2015, giving new life to the old garments as truly one-of-a-kind pieces.

ATP: Simple, streamlined and insanely chic, ATP co-founder and creative director Maj-La Pizzelli presented the Spring 2022 collection via a charming faux auction where guests held up paddles to bid ‘need” or ‘love.’ Generally, these items elicit both responses. The brand has been awarded a Butterfly Mark signaling their luxury brand sustainability thanks to their 80 percent non-toxic vegetable-dyed leathers and artisanal batch manufacturing which avoids overproduction.

Gemme Collective – The recently launched circular fashion rental site considers the environmental cost of shipping E-comm items by encouraging renters and sellers to meet physically to do the exchange. While shipping is possible, the business model focuses on Gemme Collective as a local business and in theory, expansion to other markets would be regional as well. Think Airbnb for the circular clothing market.

Die Monde:  When designer and founder Angelo de Silveira of Die Monde, a youth-centric elevated streetwear collection, launched his brand, he was motivated by speaking to Stockholm’s new generation whose multi-ethnic backgrounds weren’t always represented in the clothing offered. He enables human sustainability by working with newly arrived Syrian refugees with sewing skills to employ and help them integrate into Swedish society. As he puts it, “it was a looking at a problem and seeing a solution,” as the Togo-born designer was looking to keep his production local, thus more sustainable.

Hope: Former Acne designer and Hope creative director Frida Bard takes the unisex concept one step further by adding dual sizing to garments that she feels work equally on men and women, thus eliminating creating two collections. Additionally, the brand has done away with pre-collections spreading the drops of the main collections to avoid overproduction and makes eco-conscious choices regarding manufacturing methods and materials.

Stockholm Surfboard Club: Another Acne alum Manne Glad has built his love of surf into a brand that primarily sells and refurbishes custom surfboards and wet suits, which has expanded into a men’s clothing line with a retro-cool aesthetic heavy on Western and golf themes.

Minna Palmquist:  Equal parts artist and designer, Palmquist explored the notion of the body image stereotypes in her latest collections of manipulated classics such as the T-shirt, classic white shirt and tailored jacket.

Caterina Midby and the Swedish Fashion Association (SFA) team have helped put Stockholm Fashion Week back on the map since arriving in the role December 2019. This season marked the third installment and most in-person event since her arrival. Midby’s background as an editor and sustainability leader at H&M qualify her to raise the awareness of the Swedish fashion industry. The Scandinavian country can attribute 11 percent of its exports to clothing and textiles.

“SFW is not just to boost sales—yes, that is the end goal—but our main objective is to show the value and depth of what Swedish fashion brands are doing sustainably and creatively with their cool style,” says Midby adding, “Sweden is a test market for a lot of brands being trend-conscious and open to new things because we are a diverse, open country.” She notes that Swedish brands are leading the sustainability movement with change and can help other brands with tools to implement change. The industry in general is far from producing a significant amount of environmentally zero-impact garments.

Unlike its other European neighbors, the Swedish government doesn’t support the fashion industry per se. Thus, sponsors such as Boozt.com, The Absolute Company, Stockholm-The Capital of Scandinavia, Launchmetrics and more were crucial. The SFA is also concerned with the sustainability of Stockholm Fashion Week long-term. “We are just two staff people here where other cities London, (BFC), Paris (FHCM) and New York (CFDA) have bigger fashion organizations.” To that end, Midby feels the region should become a collective.

“I think we need a Nordic Fashion Week to hub the three events; Stockholm, Copenhagen, and Finland,” she opines. “This is the key to make it sustainable, we could take turns hosting and it makes it easier to draw attendees with less travel,” she suggests adding it could be a more extended event of five or six days versus the current three-day models. “This is the key to making it sustainable; We are a small region with small countries. Sweden is the biggest but still a small country.” That may be, but when it comes to sustainability, they roll big.