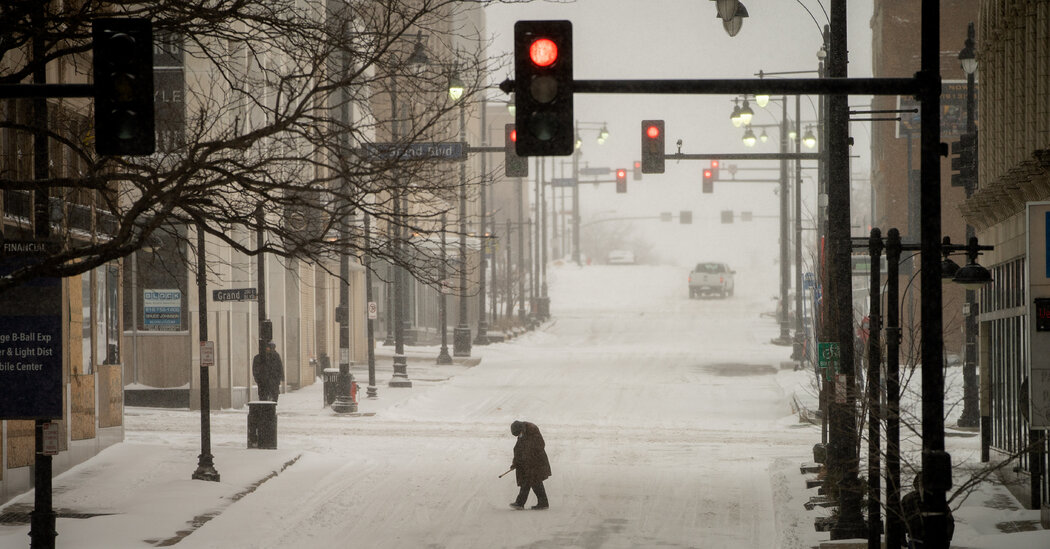 CHICAGO — A sprawling storm blocked highways, closed schools and canceled flights across much of the central United States on Wednesday, with nearly a foot of snow piling up in parts of the Midwest while areas to the south braced for potentially dangerous accumulations of ice.

The system left large piles of snow in Chicago, St. Louis and Kansas City, Mo., all places accustomed to wintry disruptions, but also threatened to take down power lines and cause power outages in places like Texas and Tennessee, where extreme winter weather is less common, and where the worst of the storm was not expected to hit until Wednesday evening or Thursday.

“The approaching storm front is forecast to be one of the most dangerous events in our recent history of record-breaking disasters, due to the possibilities of heavy icing accumulations,” said Michael Dossett, the director of Kentucky Emergency Management.

The storm disrupted life across three time zones, closing courtrooms in New Mexico, blocking highways in Missouri and causing crashes in Indiana. Bus service in parts of Illinois was interrupted, colleges in Kansas called off classes and as much as 10 inches of snow were expected in parts of Michigan.

Some of the worst impacts were still unfolding, with temperatures dropping below freezing in Arkansas, where the National Guard was deployed, and police officers in Lubbock, Texas, trying to convince people to seek shelter.

“If anybody who’s obviously homeless is set up with a campsite, or whatever the case may be, we’re not looking to tear down the campsite,” said Sgt. Steven Bergen of the Lubbock police. “We just want them to survive the night.”

More than 2,100 flights were canceled nationwide, according to FlightAware, a tracking website, and Amtrak paused train service across the Midwest and the South. Forecasters said that ice could make travel impossible in the Missouri Bootheel, the southeasternmost part of the state, and that up to an inch of ice could form in Memphis, where the possibility of falling trees and power outages loomed. Other areas of Tennessee prepared for the prospect of flooding.

“Any ice around here is uncommon and could cause glazes and road issues,” said Faith Borden, a National Weather Service meteorologist in Nashville. “We are not used to that around here. That could be a problem.”

That icy cocktail of precipitation had many residents bracing for the worst.

“Everyone is dreading the power going out,” said Chris Gilbert, an employee at an Ace Hardware store in Germantown, Ohio, south of Dayton, where customers were rushing to buy shovels.

Around Dallas and Oklahoma City, some schools had called off classes for Thursday and Friday. In Kentucky, forecasters warned of tree damage and “treacherous driving conditions.” And in Arkansas, where temperatures fell by 10 to 15 degrees in a 30-minute span in some places, the National Weather Service gave tips about what to do if the power went out.

“When it comes to ice, it’s just a completely different animal,” Dave Parker, a spokesman for the Arkansas Department of Transportation, told local reporters.

In southwestern Ohio, where meteorologists predicted a prolonged transition from rain to snow, followed by gusty winds, residents stocked up on supplies. In New Lebanon, Ohio, Carla Edgington filled her grocery cart with essentials like cereal and potatoes.

“I want things you can eat if the power goes out,” said Ms. Edgington, who feared that the ice could bring down power lines.

In Texas, where snow was accumulating in the Panhandle and sleet and freezing rain were already falling southeast of Lubbock, some residents feared a repeat of a storm last winter that knocked out power for days in some areas. Though forecasters warned of heavy snow in West Texas and significant icing around Dallas, the prospect of above-freezing temperatures by the weekend lessened some fears.

“It’s really the duration that is not comparable to last year,” said William Iwasko, a Weather Service meteorologist. “We had those freezing temperatures for over a week.”

In the Midwest, where severe winter weather is more routine, problems were still mounting. Some trucks and other large vehicles were banned from the Ohio Turnpike until midday Friday. In Missouri, a crash on Interstate 70 in Columbia blocked westbound traffic for a time. And in Illinois, blowing snow limited visibility to a quarter-mile or less in some areas.

“It’s not worth the risk to attempt to travel in these conditions,” the city of Peoria, Ill., posted on Twitter. “When you get stuck, you put yourself in danger, you risk waiting for a tow, and you make it hard for plows and emergency vehicles to do their jobs.”

As the storm pushed to the northeast, it promised to bring significant snowfall to parts of New York and Ontario. Gov. Kathy Hochul of New York relocated some plow drivers on Long Island to parts of the state that could receive a foot or more of snow.

“We’re now in the thick of winter and this newest storm is poised to hit us with everything in the weather arsenal — heavy snow, sleet and freezing rain,” said Ms. Hochul, whose state endured another round of severe weather just last weekend.

The snow was already falling on Wednesday in Ferguson, Mo., a St. Louis suburb, where Donald Boyce said his short-staffed Public Works Department was working in shifts to clear the streets. Snow was expected to continue into Thursday, with temperatures forecast to drop to 18 degrees overnight.

“The biggest challenge is trying to stay ahead,” Mr. Boyce said. “When the temperature drops and the ice occurs, it’s very hard to treat the ice on all the roads.”

But in eastern Kansas, Mark Nelson said he welcomed the snowfall as much-needed moisture for the dry soils and depleted ponds on his farm. He was keeping a close eye on his cattle, especially because dozens of them were expected to give birth in the coming days. Mr. Nelson checked on the animals several times overnight, and was hauling bedding out to his snowy pasture on Wednesday morning.

“If you can keep them out of the direct wind and they’ve got something to eat,” he said, “they’ll be all right.”