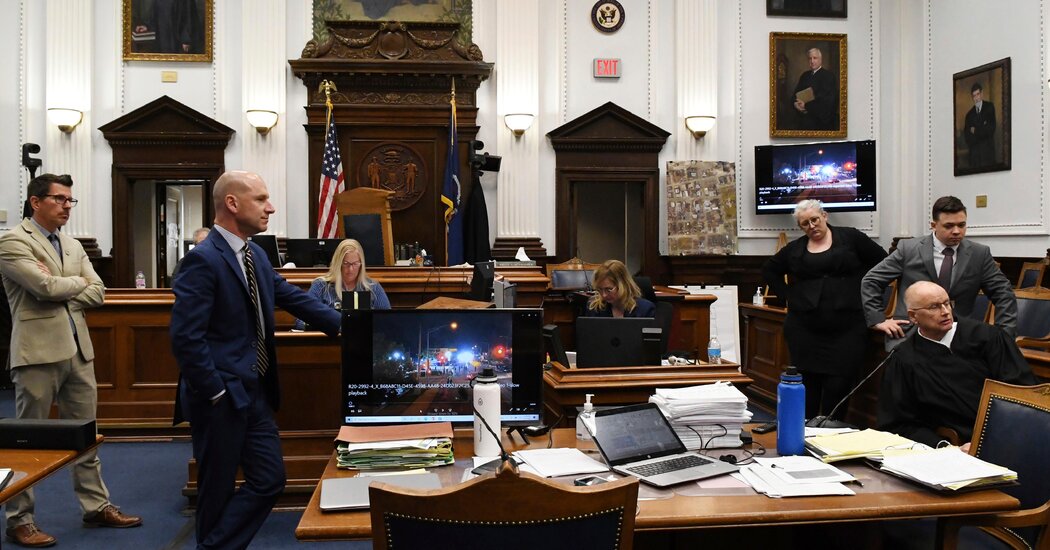 KENOSHA, Wis. — The trial of Kyle Rittenhouse has lasted for two weeks, with dozens of witnesses, photo evidence and video clips, as well as testimony from Mr. Rittenhouse himself, who is accused of intentional and reckless homicide and other crimes for fatally shooting two men and injuring a third.

The jury in the courtroom in Kenosha, Wis., has watched intently and scribbled notes throughout opening statements and eight days of testimony. Closing arguments are expected from both sides on Monday.

Here are six pivotal points from the trial:

The Defendant Takes the Stand

Mr. Rittenhouse testified in his own defense, offering his first detailed public account of the shootings. He answered questions from lawyers for several hours, mostly appearing composed but occasionally breaking down into tears while his mother, Wendy, sobbed from the courtroom gallery.

He insisted that he had been asked to go to downtown Kenosha in August 2020 by the owner of Car Source, a business that had endured damage and arson in demonstrations over the police shooting of a Kenosha resident. Mr. Rittenhouse told the jury that he had feared for his life and acted in self-defense when he shot three people. Under cross-examination, Mr. Rittenhouse was pressed on the risk that Joseph Rosenbaum, who had no weapon, posed when Mr. Rittenhouse shot and killed him.

“If I would have let Mr. Rosenbaum take my firearm from me, he would have used it and killed me with it and probably killed more people,” Mr. Rittenhouse said.

Judge Bruce Schroeder has a reputation for being tough on sentencing but especially vocal regarding the rights of defendants during trial. That was particularly on display during the Rittenhouse trial, when Judge Schroeder rebuked a prosecutor, Thomas Binger, over what the judge perceived to be violations of his orders.

“You’re an experienced trial attorney, and you’re telling me that when the judge says, ‘I’m excluding this,’ you just take it upon yourself to put it in because you think that you found a way around it? Come on,” Judge Schroeder said.

A Witness Downplays a Threat

Jason Lackowski, a former Marine who was among the armed people who arrived in Kenosha after he saw reports of destruction during two nights of civil unrest, testified as a prosecution witness, appearing to undermine Mr. Rittenhouse’s assertion that Mr. Rosenbaum posed a lethal threat. Mr. Lackowski told the court that Mr. Rosenbaum had taunted him and a group of armed people like him who said they had decided to come to the area because they wanted to defend the local businesses.

“After he had done that a few times, I turned my back to him and ignored him,” said Mr. Lackowski, who dismissed Mr. Rosenbaum as “a babbling idiot.”

Testimony of a Close Encounter

Richie McGinniss, a videographer for The Daily Caller, a conservative website, was perhaps the closest witness to the shooting of Mr. Rosenbaum to testify at the trial. Mr. McGinniss was trailing behind Mr. Rittenhouse and Mr. Rosenbaum when their chase began, and he was only feet away when Mr. Rittenhouse fired his gun.

Mr. McGinniss is both a witness for the prosecution and a named victim. One of the criminal counts against Mr. Rittenhouse accuses him of recklessly endangering the safety of Mr. McGinniss, who testified that he quickly checked to see if he had also been shot.

But he also provided testimony that hurt the prosecution’s case, by saying that Mr. Rosenbaum had first lunged at Mr. Rittenhouse and reached for the barrel of the gun.

When the two were in the back of an S.U.V. together, as Mr. Rosenbaum was dying, Mr. McGinniss tried to reassure him, he testified.

“I was just telling him that we’re going to have a beer together afterwards, and it was all going to be OK,” a shaken Mr. McGinniss said.

Gaige Grosskreutz, the lone survivor of the shooting in Kenosha, was a crucial witness for the prosecution, testifying that he feared for his life when he encountered Mr. Rittenhouse. Mr. Grosskreutz, a 28-year-old medic, was shot in the arm by Mr. Rittenhouse after following him down the street as he fled. Mr. Grosskreutz testified that he had run in the direction of gunfire, intending to treat anyone who had been injured by the shooting.

The Criminal Charges Against Kyle Rittenhouse

Count 1: First-degree reckless homicide. Kyle Rittenhouse is accused of this crime in connection with the fatal shooting of Joseph D. Rosenbaum. Under Wisconsin law, the crime is defined as recklessly causing death under circumstances that show utter disregard for human life.

Count 3: First-degree intentional homicide. Mr. Rittenhouse faces this charge in connection with the fatal shooting of Anthony M. Huber. The crime, analogous to first-degree murder in other states, is defined as causing the death of another human being with intent to kill that person or someone else.

Count 4: Attempted first-degree intentional homicide. Mr. Rittenhouse faces this charge in connection with the shooting of Gaige P. Grosskreutz, who was struck and wounded.

Count 6: Possession of a dangerous weapon by a person under 18. The judge dismissed this charge prior to closing arguments, agreeing with a defense argument that Mr. Rittenhouse wasn’t technically prohibited under a strict reading of Wisconsin state law from carrying the particular type of weapon he used, even though he was 17 at the time of the shootings.

“What was going through your mind at this particular moment?” Mr. Binger, the prosecutor, asked in court.

“That I was going to die,” Mr. Grosskreutz said.

An Officer Gives His Perspective

Officer Pep Moretti of the Kenosha police spoke publicly for the first time about his role in the case, and about how police officers had reacted the night of the shootings. His testimony suggested that he was responsible, in part, for not arresting Mr. Rittenhouse right after the shootings in the chaotic streets of the city. After Mr. Rittenhouse shot three people, he approached Officer Moretti’s squad car with his hands in the air as a gesture of surrender, but police officers ordered him out of the way and rushed down the street to aid victims and search for an active shooter.

Officer Moretti testified that he did not interpret Mr. Rittenhouse’s actions as an attempt to surrender. He said that throughout the days of protest and rioting, many people in the crowds carried guns and other weapons — and that it was not unusual for someone to approach officers during the unrest with their hands up.

“There was probably more people armed with weapons than not throughout the entire course of the civil unrest,” he said.

“So seeing someone with an AR-15 wouldn’t necessarily mean much to you at that point?” asked James Kraus, a prosecutor.

“At that point in time that night, no,” Officer Moretti said.