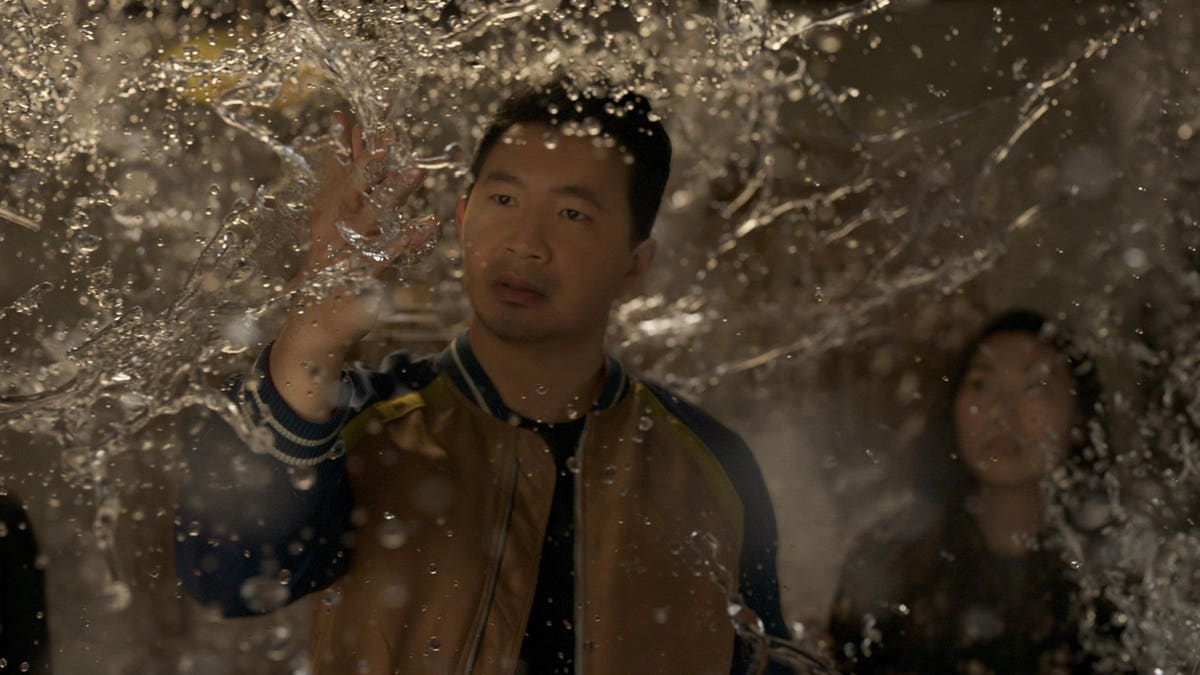 As of this posting, Marvel and Disney’s Shang-Chi and the Legend of the Ten Rings (review) has logged a $71 million Fri-Sun/$83.5 million Fri-Mon holiday debut (update: it’s actually $75.5 million/$90 million, since, as expected, Disney underestimated yesterday). That’s obviously the biggest Labor Day weekend launch ever. Heck, it’s almost, almost triple the unadjusted $30.5 million Fri-Mon debut of Rob Zombie’s Halloween in 2007. Even if it is only as leggy as Halloween ($58 million/$30 million) or Jason Statham’s Transporter 2 ($43.5 million from a $20 million Fri-Mon debut in 2005), it’s looking at a domestic cume between $171 million and $195 million.

And with strong buzz, solid reviews, Disney’s run of leggy theatrical releases in 2021 (Raya and the Last Dragon through Free Guy) and a lack of tentpole competition until No Time to Die on October 8, well, even legs like Pierce Brosnan’s The November Man ($25 million/$10 million in 2014) gets it to $225 million domestic. So, with the disclaimer that some of this will be painfully obvious, let’s take a quick gander at the variables and factors that played into this summer-ending triumph. Without further ado…

The MCU franchise is the biggest, safest and most trusted brand in theatrical filmmaking. It’s coming to a point where consumers essentially get all of their genre needs from Marvel movies (and at least some DC comic book superhero flicks). That ends up being to Marvel and DC’s advantage when general audiences look at Shang-Chi or DC’s Joker as unlike anything they’ve ever seen in theaters because they don’t consume much non-franchise films/television shows. But I digress. Marvel has been, at least since Guardians of the Galaxy in August 2014, the biggest “movie star” in town. Most North American audiences have never heard of Shang-Chi: Master of Kung Fu, don’t watch Kim’s Convenience and didn’t spend the pandemic binging Lust Caution, The Grandmaster and the five-hour cut of Red Cliff. However, they will show up because they trust the MCU to deliver IMAX-friendly, four-quadrant, character-focused three-to-four star popcorn thrills.

The main trailers for Shang-Chi and the Legend of the Ten Rings were… not that great. I’d also say the same thing about the pre-release marketing for Thor, The Avengers and Captain Marvel. However, Disney knew the Destin Daniel Cretton-directed movie worked like gangbusters, so they screened it early and let the review embargo drop in late-August. It currently has a 92% fresh and 7.6/10 on Rotten Tomatoes, with the reviews assuring folks that A) the action was well-staged and coherently edited, B) Simu Liu was a charismatic new MCU lead who didn’t quite let Tony Leung steal the entire film out from under him and C) there were plenty of not-in-the-trailer goodies both in terms of narrative twists and unexpected visual delights. Oh, and the notices assured folks that they could take their kids as long as their kids were old enough to read subtitles.

As noted above, the two main theatrical trailers were pretty mediocre. However, as you know if you’ve seen the film, there are many character beats, action set pieces, plot twists and visual reveals which are barely hinted at in the marketing. That’s obviously a very dangerous game, but it’s one that can pay off in spades if audiences show up anyway. As we saw with the likes of Free Guy, Hancock, Knives Out, Frozen and The Dark Knight, you don’t have to give away the whole movie if you trust audiences to show up anyway. And if they do show up, the unspoiled surprises will increase the positivity of the buzz and create a sense of ownership among audiences, resulting in often very long legs. Even my kids remarked, unprompted, that Shang-Chi was much better than the trailers. That’s good, because they hated the Eternals preview.

It’s not a zero sum game, but having at least something approximating a theatrical window does boost overall global box office. Save for The Conjuring: The Devil Made Me Do It, most of Warner Bros.’ post-Godzilla Vs. Kong offerings struggled theatrically while being concurrently available (for the first 31 days) on HBO Max. Black Widow did okay in North America ($183 million), but its concurrent “available to lease on Disney+ for $30” release was a major factor in the the poor 2x weekend multiplier, the sharp 69% second-weekend drop and overall frontloaded-for-Marvel (a 2.3x multiplier from an $80 million domestic debut) theatrical run. Conversely, Wrath of Man topped $103 million worldwide (huge for a solo Jason Statham actioner), A Quiet Place part II earned 90% of its predecessor’s $341 million global cume and Free Guy is racing toward $300 million on an over/under $115 million budget. So, yeah, making theaters the only place to see Shang-Chi for the first 45 days was absolutely crucial for this business-as-usual debut.

Shang-Chi and the Legend of the Ten Rings is more evidence that diversity is a big added-value element in films audiences already want to see. The Simu Liu/Awkwafina/Tony Leung/Michelle Yeoh action fantasy was the first Asian-centric Marvel movie was a big deal. “Marvel movie” was, alas, more important than “Asian-centric.” Snake Eyes (starring Henry Golding and Andrew Koji) bombed six weeks ago, while In the Heights was not “the movie we need right now.” Without being a total Debbie Downer on this (I still wish folks who saw Black Panther five times maybe only saw it four times and sampled A Wrinkle in Time, Gringo, Annihilation and/or Pacific Rim: Uprising as well), Marvel’s Phase Four plan to highlight more “not a white guy” protagonists helps maintain the event movie nature of these newbie origin stories in a world where merely being a superhero movie is no longer special.

To paraphrase Ratatouille, not every movie can be a blockbuster, but a blockbuster can open anywhere. That’s one key lesson, as Disney was somewhat forced by the pandemic to schedule one of their more promising “new” MCU movies on what traditionally has been the deadest of dead holiday weekends. All due respect to Chris Nolan’s Tenet (being a hero means you tried, even if you failed), but this weekend has traditionally been marked by studio dumps, reissues of popular favorites, grindhouse openers (Halloween, Transporter 2, Gamer, etc.) and adult-skewing, star-driven thrillers (The American, The Constant Gardener, The Debt, etc.) for which a $15 million four-day debut would be an unmitigated triumph. But as Warner Bros. showed with It in early September 2017, and as Universal showed with Fast & Furious 6 in early April 2009, a top-tier tentpole can open anywhere as long as audiences wanted to see it.