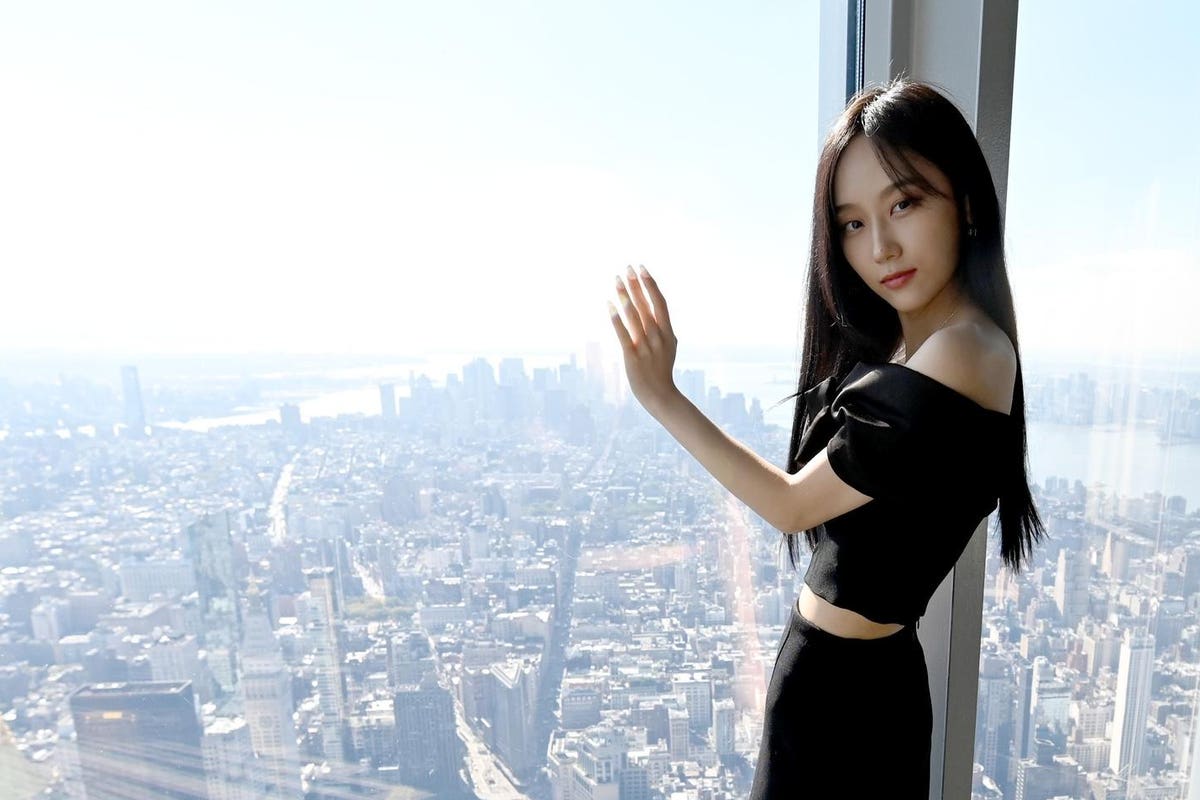 Watching Seori look to the entirety of New York City from the observation deck of the Empire State Building feels illustrative to her vision as an artist. With a string of A-list cosigns, collaborations and song placements in under a year-and-a-half, Seori has managed an unprecedented come-up in the K-pop industry—but, crucially and atypically, has done so on terms that put her artistry first.

A soft, inviting head voice opened Seori’s first-ever single “Running Through the Night” to spin a dreamy story of star-crossed lovers boasting “eyes with the moonlight” wishing for time to pause when they’re together. Released alongside her debut EP from May 2020, ?Depacse Ohw, the track began the larger, metaverse story Seori aims to tell kicked off by the six-song project that she co-produced and wrote entirely on her own. Followed by the ethereal “Trigger” and surging, English-language single “Lovers in the Night,” Seori’s vision was accompanied by visuals displaying a colorful, otherworldly universe that enchanted not just of million YouTube viewers but fellow artists in Korea and abroad—including Jungkook of BTS who added “Running Through the Night” to his YouTube playlist and inspired his band’s millions of followers to check out the new singer-songwriter-producer.

But before being launched into the K-pop stratosphere as this triple threat, Seori set to establish a strong groundwork. After months experimenting on social media and posting covers to YouTube, Seori was contacted by multiple labels including the then-artist-less record company Atispaus in South Korea. But even with no track record behind them, as well as an unorthodox audition, Seori felt connected with the company.

“Of course, I never heard about the label before,” Seori recalls of her first meeting with the Atispaus team that included Graphix, a DJ and producer now also signed as a musician under the label. “Graphix was there in the meeting and they suggested we improvise on the spot. We worked together for an hour and made a song right there. I felt really good about it. That’s when I decided to go for it with them. Since then, me and Graphix, who’s become my current producer, have always worked by starting from scratch: We make the melody, the lyrics, we make everything.” Graphix is the only other collaborator on ?Depacse Ohw as the co-producer on all of its six tracks.

While auditions have been commonplace for decades for Korean entertainment companies, K-pop hopefuls typically are only given mere seconds to prove their singing, dancing or modeling abilities to recruiters who spend their days scoping out massive amounts of new talent. Seori meeting with Aritpaus and creating an entire song—in an hour, nonetheless—resonated with her larger ambitions as an artist.

“I was always so inspired by other songwriters and I believe that’s what I want to show when it comes to my own music,” she says. “I was really affected by Avril Lavigne when I was young and these days I like Conan Gray…I first started making my own music when I was 18. At first, I was just on the piano and making melodies. Then I started to think that I want to tell my stories through music which is why I started writing lyrics. I got fond of the process and interested in making music since then which is why I’m making it myself and not taking tracks from other writers or artists.”

That vision coincides with her creative support system that not only includes Atispaus (“They respected my music and want me to do my own music,” Seori adds) but a recent linking with the influential music-marketing collective in 88rising (“I really respect their global-wise culture—they constantly ask me what I like, what I want and what kind of music I want to do”).

Her professional connections are all the more important as Seori not only surges forward as Korea’s next globally focused solo star but also as a woman in the K-pop field taking such strong ownership in her music—a still-unfortunately scarce aspect to find especially with new artists. Seori recognizes this but hopes she can change perceptions and norms in the industry by simply doing what moves her.

“Female producers are really rare in Korea,” Seori says, before adding, “I wanted to make that an advantage for me so that I can do more in the industry—it’s technically something small, but it can make a big impact.”

So far, Seori’s made a remarkable impact on the scene. Not just with her output but collaborations with the K-pop’s biggest idols (Tomorrow X Together featured her on a critically and commercially beloved single while MAMAMOO’s Moonbyul snagged her for new single “Shutdown”), as well top hip-hop and R&B acts (“The Long Night” was a collab with in-demand producer Giriboy before Seori landed on “UFO” as the biggest single yet from rising R&B wunderkind Gemini), and even blockbuster soundtracks (singing “Warriors” with Indonesian rapper Warren Hue for the Shang-Chi And The Legend of The Ten Rings that was helmed by 88rising).

“I like to respect the other person to work together so my innermost and essential feelings can be put into the music,” Seori shares of her partnership policy. “I need to like that person, first, and their music.”

While some of Seori’s connections come in casually (“I do reach out on DMs on Instagram,” she shares cooly), others come through communicating with her label (her connects to TXT as well as eaJ of Day6 both came through professional means). “I usually just go with the flow,” she adds. “If they contact me personally, that’s cool, or they can contact the company too.”

When it comes to the future, it seems Seori only has to keep focus and articulate to make her vision a reality. She’s in New York ahead of what soon became her first-ever live performance at 88rising’s 2021 Head in the Cloud Festival in Los Angeles last month—a vision of a goal she set her sights on since Day 1.

“I have only one thing to say,” when asked for advice for other DIY-inspired singers out there. “From the start, even when I was uploading YouTube videos and when I was preparing to debut, I thought ‘Say what you think and say it out loud.’ You have to trust yourself that what you imagine can happen. I’ve imagined myself being in America and performing in front of a lot of people since my debut. And, actually, it hasn’t been a long time since my debut but I’m here and I’m really grateful for that. We’re going to LA, I’m going to perform. What I imagined is coming true.”

So, what’s Seori imagining as she looks out over all of NYC from one of its tallest buildings? World domination? An Avril Lavigne duet? The perfect slice of New York pizza? If Seori’s story continues as it has, we’re likely just a few months away from finding out.