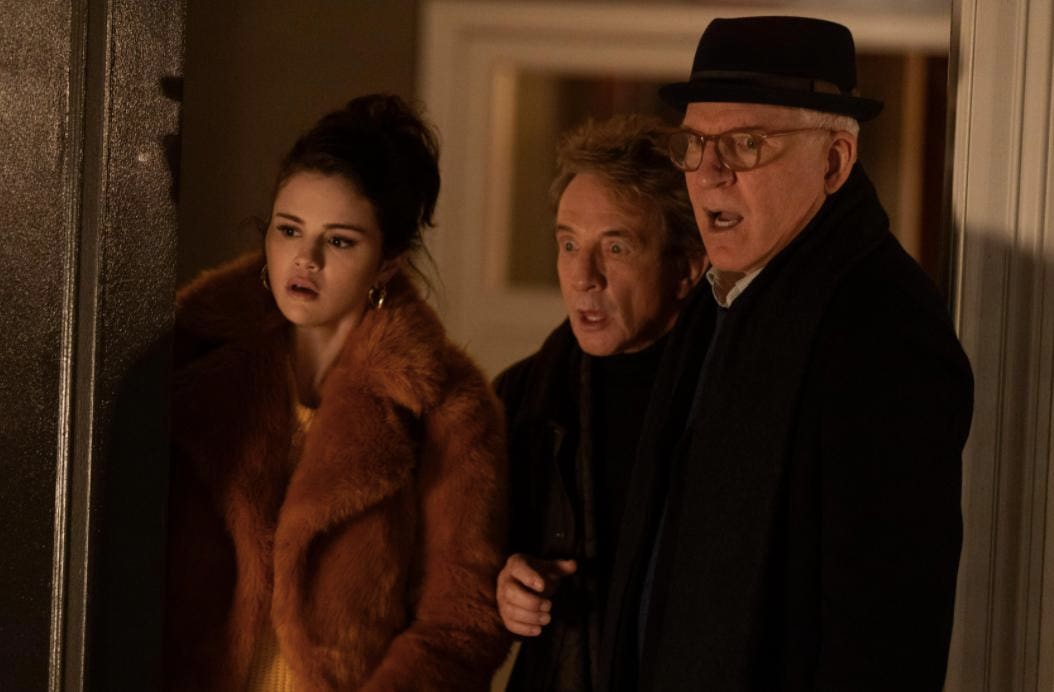 They’ve done several movies together, including Three Amigos! and Father of the Bride, as well as a two-man touring variety show, but now Steve Martin and Martin Short are tacking a murder mystery together in their first TV series.

And they’ve added a third partner to their group – Selena Gomez.

Only Murders In The Building follows three strangers (Martin, Short, and Selena Gomez) who share an obsession with true crime and suddenly find themselves wrapped up in one.

When a grisly death occurs inside their exclusive Upper West Side apartment building, the trio suspects murder and employs their precise knowledge of true crime to investigate the truth.

Looking to jump on the popularity of podcasting, the trio, struggling actor Charles (Martin), bankrupt Broadway director Oliver (Short) and a mysterious tenant named Mabel (Gomez) create their own show and investigation.

As they proceed, the three unravel the complex secrets of the building which stretch back years. Perhaps even more explosive are the lies they tell one another. Soon, the endangered trio comes to realize a killer might be living amongst them as they race to decipher the mounting clues before it’s too late.

Martin, speaking about having the initial idea for the series, says, “Actually, I had this idea because I’m a true crime – ‘fan’ is the wrong word – but I’m interested in it. I’m interested in the solving of crime. I really like that.”

He goes on to reveal that the idea wasn’t initially conceived for the trio that’s now headlining the series. “It was actually conceived for older actors, and then Marty one day said to me, ‘Well you’re old.’ The comedy came because of the casting. If you had cast three serious actors, it’d be a very different show. But the comedy just occurred through the writing and through the performances.”

Admitting that he was only sort of familiar with Gomez’s work, Martin says, “I do dance around the house to her music all the time and have for years. But I didn’t know of her theatric or movie work or television work. So, I looked it up and I thought, ‘oh, she’s going to be young, she’s a beginner,’” adding, with just a hint of sarcasm, “She’s done more movies than I have.”

When asked about working with the iconic duo, Gomez gives her own witty comeback, as she says, “I had no idea who they were.” Then she quickly adds, “I’m kidding. I, of course, was so excited. I was very nervous, to be honest, because I didn’t know what to expect, because sometimes I find that comedy people can be a little bit distant and so I didn’t know what I was getting myself into. And now I have like these two crazy uncles in my life that basically give me boy advice and I sing rap songs to them.”

Short jumps in to say that it was ‘a dream to work with this brilliant young lady,’ explaining, “What I love about the end product of the show is the three different energies of the actors – I kind of play it very real, Steve goes way over the top, and Selena grounds everything in this kind of dry, hilarious delivery. The combination, I think, is perfect. “

Gomez interjects about the duo, “How they lead a set is so commendable. They are so humble and they are kind and they’ve set such an example for me. They’ve been doing this longer than I’ve been alive and if anything like I would be so lucky to have a career that lasted that long.”

She adds, “Plus, I just sit down and laugh all day.”

Martin feels that when Gomez is on screen, the show is ‘elevated. “It’s more mysterious, it’s more interesting. There’s an old cliché, the camera loves her. And I would say the camera likes me, and it’s fine with Marty.”

Delving in to why his decades long partnership with Martin works, Short says, “I’m always admiring him from day one, which is that he shows up on the set. His agenda is to make the set loose and happy ‘cause that’s the playground. He is never temperamental. He always knows his lines, and if he doesn’t, he does jokes about it that gets everyone laughing and then it becomes a better take. And that’s been the way it’s been since [the film] Three Amigos for me.”

Martin expands on this saying, “Yeah, I think we just get along at a humorous level, and always have. We don’t get neurotic with each other….”

“[And] I actually don’t think we’re competitive with each other, particularly,” says Short.

Short says that while the pair have done their two-man show for years, they never thought about doing something like Only Murders in the Building. “He and I had never talked about, ‘hey, we should do a TV series together.’”

“We never even talked about doing a movie together again,” says Martin. “[And] I think we’re very lucky to have this late in life after we’ve done a lot of our work. To have this thing that’s so much fun and creative… I mean, I wasn’t even going to be in this, and I sort of thought, well, I’ll do it if Marty does it.”

“So, it’s a delightful surprise,” says Short. “And, the experience was as happy and joyful and creative as you could dream it to be.”

“Only Murders in the Building” premieres on Hulu on Tuesday, August 31, with a new episode premiering each week.