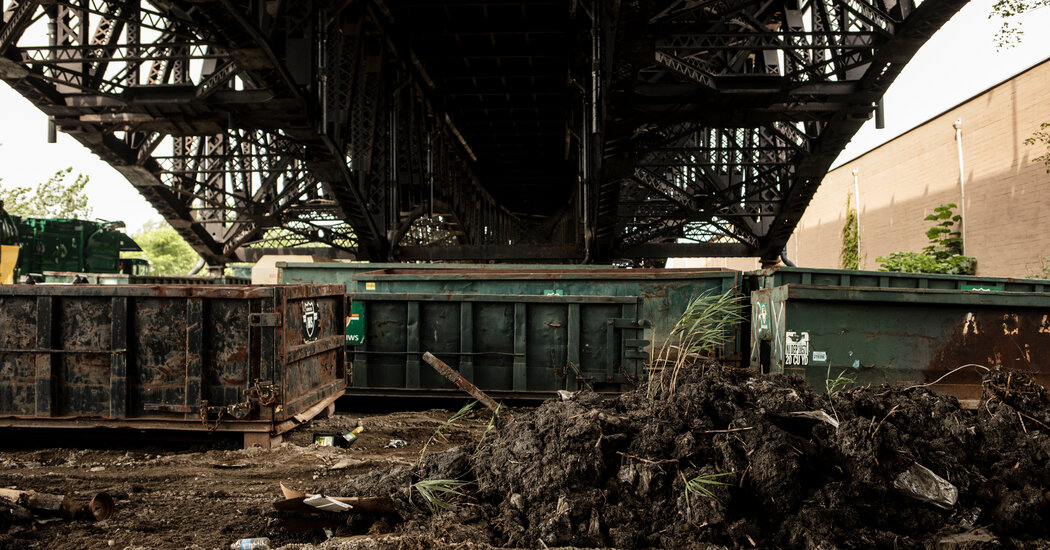 The disappearance of Jimmy Hoffa, a mystery that has gripped the American imagination for half a century on its ascent to national folklore, is the subject of a new F.B.I. investigation centered on the site of a former landfill in Jersey City. A worker, on his deathbed, said he buried the body underground in a steel drum.

F.B.I. agents armed with a search warrant arrived in Jersey City at a plot of dirt and gravel the size of a Little League diamond below the Pulaski Skyway on Oct. 25 and 26 to conduct a “site survey,” according to the Detroit field office, which has led the investigation into Mr. Hoffa’s disappearance in 1975. The steel drum is said to be buried about 15 feet below ground, in the shadow of countless millions of drivers who have passed it by.

“F.B.I. personnel from the Newark and Detroit field offices completed the survey and that data is currently being analyzed,” Special Agent Mara R. Schneider, a spokeswoman, said on Thursday. The formal statement did not mention Mr. Hoffa by name and did not elaborate on a timeline for any potential excavation.

The new investigation, to be sure, has a familiar ring, as it follows several failed searches for Mr. Hoffa’s body over the years. In Michigan, where Mr. Hoffa was last seen outside a restaurant, officers with backhoes have searched various locations, including a farm, a driveway and beneath a swimming pool.

In New Jersey, a popular urban legend had Mr. Hoffa’s remains buried under the old Giants Stadium in the Meadowlands. The 2019 film “The Irishman” raised yet another version of what may have happened, portraying Mr. Hoffa’s character shot and killed by his friend, Frank Sheeran, and his body incinerated. That theory, advanced by Mr. Sheeran in a book before his death, has long been discounted by Hoffa scholars as unlikely.

But an expert on the Hoffa case who brought the disclosure of the steel drum and its possible location to the F.B.I., Dan Moldea, a journalist who has written about the Teamster boss since before he disappeared, said the New Jersey site is “100 percent” credible, and that the new leads were very significant.

“A very prominent person disappeared from a public place 46 years ago and was never seen again,” Mr. Moldea said Thursday. “This case has to be solved.”

The new lead is bolstered by records showing that the F.B.I. received tips as far back as 1975, immediately following his disappearance, that Mr. Hoffa was buried in the landfill in Jersey City. Agents searched and, finding nothing, wrote off the tips.

“They had no idea where to start looking,” Mr. Moldea said.

The story of how the F.B.I. came to learn of the new location begins on a muddy summer day in 1975. A teenage boy named Frank Cappola worked at the former PJP Landfill near the Skyway with his father, Paul Cappola Sr.

“While I was talking to my dad, a black limousine drove into our lot in the mud,” Frank Cappola recalled many years later, in 2019, at age 62, in a sworn written statement before a notary public. His father turned to a partner at the landfill and said, “They’re here.”

The boy watched from a distance as the men approached the vehicle, where they spoke to the visitors and seemed to point to a remote corner of the landfill. He would later learn what was being planned.

By that summer of 1975, Jimmy Hoffa, who once commanded the powerful Teamsters union, had fallen from the heights of power. He served a sentence in prison after being convicted of jury tampering in 1964, and his attempts to return to his union throne upon his release were not welcomed.

At the same time, a longtime friendship with the New Jersey Mafia boss Anthony Provenzano — “Tony Pro” — had soured badly. Men who operated in the pair’s orbit would later say that it was practically an open secret that Mr. Hoffa’s days were numbered.

On July 30, 1975, Mr. Hoffa was in Bloomfield Township, Mich., for a meeting to address this very situation. He was to sit down with Mr. Provenzano and another mobster at the Machus Red Fox, a popular restaurant. But when he arrived, the other two men were not there.

And with that, Jimmy Hoffa disappeared.

The F.B.I. combed the restaurant’s credit-card receipts to track down potential witnesses from that day. A few said they saw Mr. Hoffa that afternoon out in front, where he got into the back seat of a car that drove away.

Agents interrogated union leaders and Mob bosses and henchmen, pulling dozens of them in front of grand juries. One possible outcome of Mr. Hoffa’s disappearance emerged among many, with the seemingly unlikely destination hundreds of miles away — a New Jersey landfill. The 87-acre landfill was owned in part by a man named Phil Moscato and was commonly referred to as “Brother Moscato’s dump.”

A Teamster who was in prison in New Jersey on an unrelated murder conviction, Ralph Picardo, became an informant and told the F.B.I. in 1975 that Mr. Provenzano told him as early as 1974 that Mr. Hoffa “was destined to be killed,” according to F.B.I. documents.

Shortly after Mr. Hoffa disappeared, associates of Mr. Provenzano visited Mr. Picardo in prison, and during their conversation, said Mr. Provenzano had arranged for Mr. Hoffa’s execution and that the body was taken to New Jersey on a truck.

“Picardo only speculates that Hoffa’s body may be in Moscato dump in New Jersey,” the F.B.I. wrote in a report in 1979, “and has no direct knowledge of the exact location.” Mr. Provenzano died in 1988.

A second informant in Philadelphia said two mobsters brought up the disappearance in a conversation. One said, “If the feds begin digging at the proposed dump in New Jersey, they would hit pay dirt,” and the other replied, “Yes, they sure will,” according to the report.

F.B.I. agents visited the dump in 1975 with a search warrant in a different missing person’s case, but in reality, they hoped to find Mr. Hoffa. They performed a cursory search, not knowing where to dig, and found nothing.

The dump itself became a toxic hazard. Underground fires burned night and day, spewing chemical fumes in the poor neighborhoods surrounding the site. In 1983, the dump, by then called PJP Landfill, was declared a Superfund site, an environmental disaster area to be cleaned up.

The Disappearance of Jimmy Hoffa

His downfall. After serving time from 1967 to 1971, Hoffa fell from power. His attempts to regain control of the union were not welcomed and a friendship with the Mafia boss Anthony Provenzano soured, leaving him in a precarious position.

A mysterious disappearance. On July 30, 1975, Hoffa was in Bloomfield Township, Mich., for a meeting with Mr. Provenzano and another mobster at a restaurant in an attempt to reconcile. When he arrived, the other two men were not there. After that, Hoffa vanished.

Thousands of barrels were dug up and carted away, and the landfill was capped. In recent years, it was converted into the Skyway Park, a vibrant green belt along the Hackensack River.

Mr. Moldea continued to revisit the Hoffa case over the years. In 2019, when “The Irishman” opened to theater audiences and on Netflix, he praised the film’s engaging storytelling while calling out its climactic killing as untrue.

It was around that time that Mr. Moldea was introduced to a stranger named Frank Cappola, the teenager from the landfill, with a story to tell about his father.

He recalled that muddy summer day in 1975, with the black limousine and the conversation between his father, Mr. Moscato, the partner, and the visitors. When people began gesturing to an area in the dump, Frank Cappola saw his father, Paul, react in anger: “Now the whole world will know!” he shouted with an expletive.

Frank didn’t know what he was talking about for years. Then, in 2008, nearing death, his father summoned him to tell his tale, which he had shared with no one. He encouraged his son to reveal it when the time seemed right.

The men in the limousine had come to instruct the men in the dump that Mr. Hoffa’s body was being delivered shortly and that they were to bury it, Paul Cappola told his son. Mr. Moscato told him to do the job himself.

“My father was upset with Mr. Moscato for pointing to that area of the landfill,” Frank Cappola wrote in a sworn statement in 2019, “because the dump was constantly under police scrutiny.”

“Unidentified people brought Hoffa’s dead body to PJP,” Frank Cappola wrote. “Because of the awkward position of Hoffa’s corpse after they removed him from whatever container he was in before, they were unable to place him, feet first, in a 55-gallon steel drum retrieved at PJP. So, they put him in the drum headfirst.”

Paul Cappola was left alone with the body in the barrel, and worried that someone may have seen the men pointing earlier. He made a change in plans.

“My father, who didn’t trust anybody, decided to dig a second hole with a company excavator and to place Hoffa in that location,” Frank Cappola wrote.

The new hole was on a desolate patch of unused state property just outside the dump, between eight and 15 feet deep, the father told his son. He buried the Hoffa barrel first, followed by as many as 15 to 30 chemical drums and chunks of brick and dirt, he told his son.

Then he covered the whole area with dirt. He “placed something detectable just under the surface of the grave site, which I am willing to disclose to law enforcement,” Frank Cappola wrote. Paul Cappola told his son he never shared the location with his partner or anyone else.

In March 2020, Frank Cappola died after longtime respiratory problems. He left his father’s secret with Mr. Moldea, who wrote about the disclosure. The F.B.I. contacted him in 2020, he said. He visited the site with a crew from Fox Nation, a streaming arm of Fox News, and ground penetrating radar equipment in November 2020. The radar detected shapes that resembled barrels, he said.

The site is adjacent to what is now Interstate Waste Services, a trash collection company that for years has stored empty metal containers under the Skyway. In late October, workers were abruptly ordered to clear them out, Isaac Suarez, 19, an employee, said last week. He saw the investigators arrive.

“They scanned the floor and found barrels,” Mr. Suarez said at the site, adding the location made sense. “If you were trying to hide somebody you killed, wouldn’t you want it to be in plain sight, but not?”