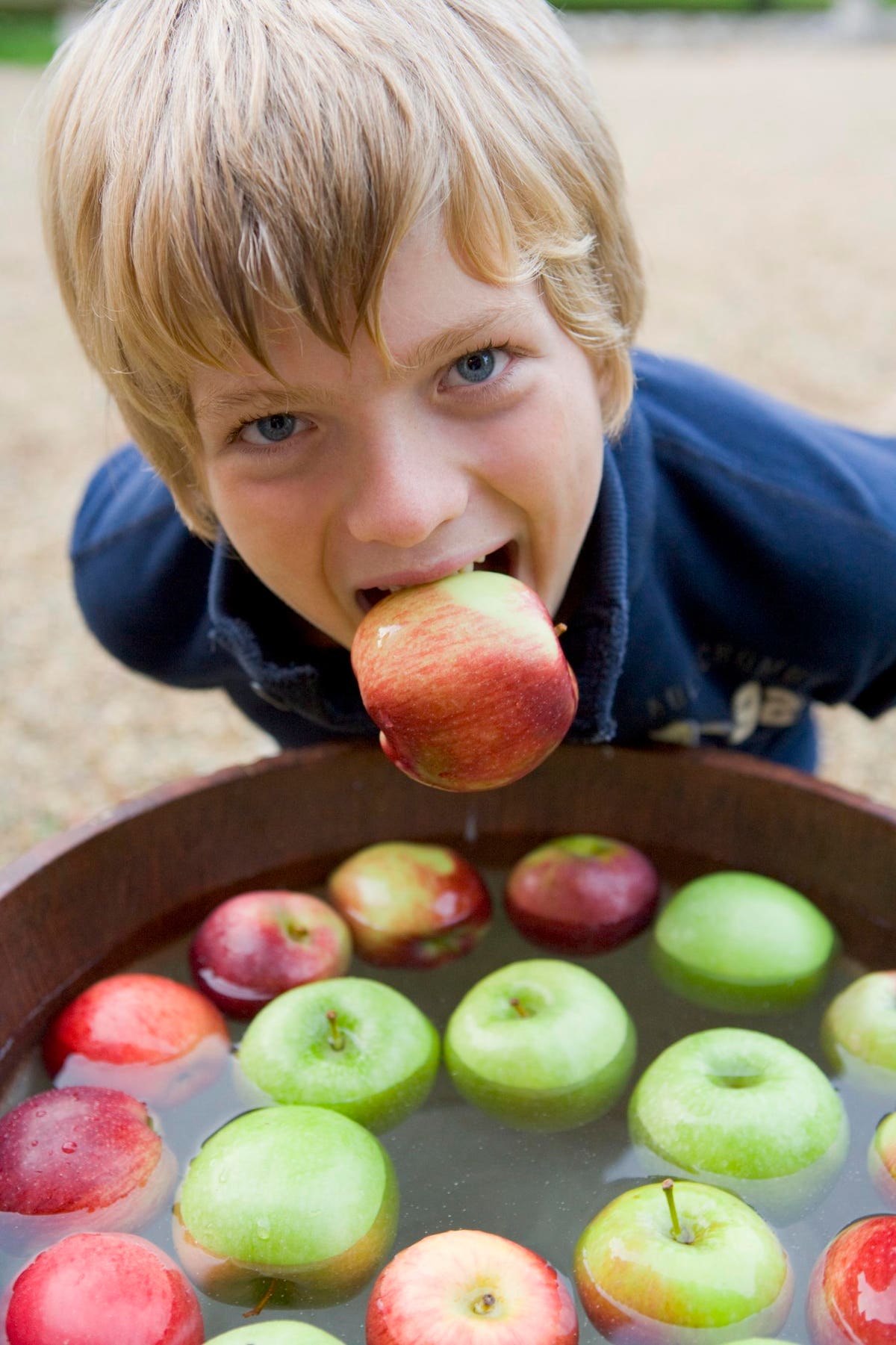 As Halloween returns this weekend, the absence of one beloved activity represents yet another victim of Covid. Of course, I’m talking about bobbing for apples. While public health departments nationwide have declared Halloween safe, they’re warning against the perils of apple bobbing as seen in It’s the Great Pumpkin, Charlie Brown when Lucy shows the gang how it’s done only to come lip-to-lip with a very special beagle. Good Grief!

Apple bobbing is still undoubtedly safer than the apple-centric Halloween game it replaced, Snap-Apple, which involved a suspended stick with an apple at one end and a candle at the other; spin the stick and try to get a bite of the apple rather than a flame in the face. But Covid adds insult to injury for the apple bobbing industrial complex. While it’s hard to find authoritative statistics, it’s seems there’s much less apple bobbing than there used to be. When I was a kid, there was bobbing every Halloween. But my 10-year-old says he’s never bobbed. Who knows? He might have been a world-class bobber.

Whether it’s Covid or candle burns, the risks we take every (holi)day are backstopped by our hospitals and health systems. And the mighty engine at the heart of American healthcare is nursing. The hard work and heroism of nurses throughout the pandemic has been well documented and rightly celebrated, inspiring millions. It’s no wonder nursing school applications are up as much as 50%. Nevertheless, the connection between nursing school and a nursing career is more fraught than you think. Turns out nursing is a case study on the widening gap between education and employment.

If nurses took unprecedented risks during the pandemic, many also sought just rewards. Nursing shortages in Covid hotspots created opportunities for travel nurse staffing companies which began raising rates to double or even triple pre-Covid levels. Hospitals were at turns angry and unable to afford to fill open positions. According to last month’s California Hospital Association complaint to the state attorney general, hospitals in poorer communities and communities of color were hit hardest. With higher rates, staffing companies were able to offer travel nurses much more, sometimes over $8,000 per week, and in at least one case $10,000. The result has been a spot shortage spiral as nurses quit to travel, creating additional need for travel nurses to fill open positions. Nursing job openings at Scripps Health in San Diego increased 96% during Covid. One Orlando hospital system recently reported 79% of nursing positions filled by travel nurses.

But if you think the travel nurse vicious cycle means hospitals are scrambling to hire newly minted nurses straight out of nursing school, you’re bobbing for the wrong apple. In large urban markets, new nursing grad unemployment has trended over 40%. It’s not zero anywhere. Secondary and tertiary market unemployment for new nurses is estimated to be only 10-20% lower. According to the American Association of Colleges of Nursing, the employment rate for new grads ranges from 85% in the South, to 79% in the Midwest, to 63% in the Northeast, and 60% in the West; last year, ¾ of new nurses from UC Davis were reportedly unemployed months after graduation. In the West, unemployment of new nurses in the West is still 12% six months after graduation. Social media and Reddit are full of comments from new nurses complaining hospitals won’t hire them until they have years of experience. Respondents encourage them to give up on hospitals and health systems and apply for positions at nursing homes or dialysis centers. So 12% unemployment masks numerous nurses who may be underemployed, or at least unhappily employed.

Even during a pandemic, even when the eye-watering cost of travel nurses makes headlines, health and hospital systems haven’t changed how they hire. Michigan’s Henry Ford Health decided the answer was to recruit more nurses from The Philippines. Kaiser Permanente went the opposite direction, imposing restrictions on new nurses despite a forecasted shortage of over 40,000 RNs in California. It’s a flashing red light that something is very wrong with American postsecondary education’s ability to launch careers.

New nurses must be licensed in order to work. To be licensed, they must pass the NCLEX, a multiple choice exam administered by the National Council of State Boards of Nursing, ostensibly assessing whether nursing graduates are prepared to care for patients. In this respect, nursing follows a different path from medicine for career launch.

This compressed process wherein nursing licensure is achieved upon passing the post-degree summative assessment is a byproduct of a simpler era when nursing was less complex. A generation ago, there were fewer diagnoses. The International Classification of Diseases 10 (ICD-10) in the 1990s had nearly 5x as many diagnosis codes as the ICD-9 from the 1970s. The ICD-11 coming out next year has about 4x as many diagnosis codes as the ICD-10. More important, a generation ago, there was no such thing as care protocols. Care protocols or “bundles” are series of connected interventions or evidence-based practices to treat a given diagnosis. Starting in the ICU, they expanded to every part of the hospital, to cardiovascular risk reduction and stroke management, to skin care and antibiotic usage. Nurses are expected to know the ventilator-acquired pneumonia prevention protocol and the central line infection prevention bundle. And while nurses may be exposed to these protocols during clinical rotations, there are so many that they’re unlikely to master any of them.

These are the skills new doctors gain during their more extensive clinical rotations, and especially during residencies. The commodious licensing structure for physicians – where licensure comes after sufficient relevant work experience – has adapted to healthcare’s higher complexity. But the licensing structure for nurses – where licensure occurs ahead of work experience – has not.

Industry experts like April Hansen, Group President of Workforce Solutions at Aya Healthcare, say one solution for new nurses is nurse residences, providing newly minted nurses with sufficient relevant experience. “But unlike in medicine where residencies occur pre-licensure and are largely funded by the federal government,” says Hansen, “nurse residencies are completely at the discretion of hospital and health systems, and not all can make the investment.” It’s a significant investment because training and less productive personnel are expensive. It’s a risky investment due to high churn among entry-level nurses (perhaps because they’re licensed before getting a good sense of what life as a working nurse is really like). So the hospital footing the bill may not reap any reward.

It’s the Great Pumpkin, Charlie Brown shows our hero trying to make a ghost costume out of a bed sheet. But in the Charlie Browniest scissor escapade of all time, he cuts so many holes that his costume looks like swiss cheese. Good Grief! Expressing the same sentiment are young Americans seeking to enter professions that don’t require licensure, or displaced workers seeking to reboot careers. For them, finding a good job is increasingly a frustrating, Charlie Brown-like experience, and more like nursing than medicine.

Across the economy, the complexity of entry-level jobs has increased dramatically. Outside healthcare, it’s not from care bundles, but rather digital transformation. The signal that job seekers are ready to be hired (usually a degree) comes not only ahead of sufficient relevant work experience, but typically ahead of any work experience. New grads are Joe Shlabotnicks among baseball players, or tourists in a world where employers are only hiring locals. Moreover, few employers invest in entry-level training programs or apprenticeships for the same reasons few hospitals have launched nurse residencies. And the jobs new grads can get often don’t translate to the jobs they want. According to John Cordova, Program Director at Futuro Health, many new nurses are told to apply at nursing homes. “But a year or two later when they apply for a job at a hospital, they’re told it’s not relevant experience for an acute care setting.”

Within the current nursing school timeframe, no amount of work-integrated learning or clinical rotations could allow nurses to master hundreds of care protocols before taking the NCLEX. What’s needed is on-the-job training, which takes time and costs money. So who pays the bill? Residencies work in medicine because the profession is sufficiently lucrative that students are willing to invest several more years training at a modest salary. And don’t forget the government subsidy. Although prospects for government subsidies for residencies in nursing, software development, or other fast-growing sectors were already remote, they just coded (in terms of nursing, not software) at the hands of Joe Manchin and Kyrsten Sinema.

Without government funding, it comes down to employers. (It would have come down to employers anyway; believing on-the-job training’s possible without employers is like believing Linus can be separated from his blanket, or Lucy from her bossiness.) In nursing, hospital giant HCA has invested in a residency for its 184 hospitals called StaRN, a one-year program that allows new nurses to become floor-ready in any of 12 specialties. But the vast majority of non-giant employers need help managing the risk and cost of unproductive talent if they’re going to try.

Beyond hospitals, intermediaries are helping employers with on-the-job training. Apprenticeship service providers are playing the part of Vizient for entry-level positions in project management, data analytics, and software development. And new Hire-Train-Deploy models in healthcare IT, Salesforce, and cybersecurity not only reduce employer risk, they eliminate it. As the travel nursing explosion shows, employers are wiling to pay a premium – sometimes a steep one – for productive talent. So businesses that hire, train, and then deploy new talent to clients are the ultimate intermediaries, providing on-the-job training while allowing employers to wait until new talent is productive before paying. More intermediaries means more on-the-job training. And that means career pathways that look more like medicine than nursing.

Healthcare workplaces won’t become less complex anytime soon. So unless and until additional intermediaries emerge to bridge the on-the-job training gap, more new nurses will be like Linus in the pumpkin patch, waiting for the Great Pumpkin to appear. Even more frustrating, hospitals serving the neediest Americans will find themselves increasingly at the mercy of travel nursing companies.

Sadly, higher education is unlikely to help. Thanks to the NCLEX, nursing schools think passing the test means their work is done. Ironically, without ill-timed licensure, nursing schools would have no excuse not to partner with and perhaps even launch intermediaries. But the test is a perfect excuse to do nothing. And that’s not a peanut-size problem. Because with an expected exodus of nurses as we exit the pandemic, there’s no such thing as “good grief” when it comes to new nurses who can’t find jobs.