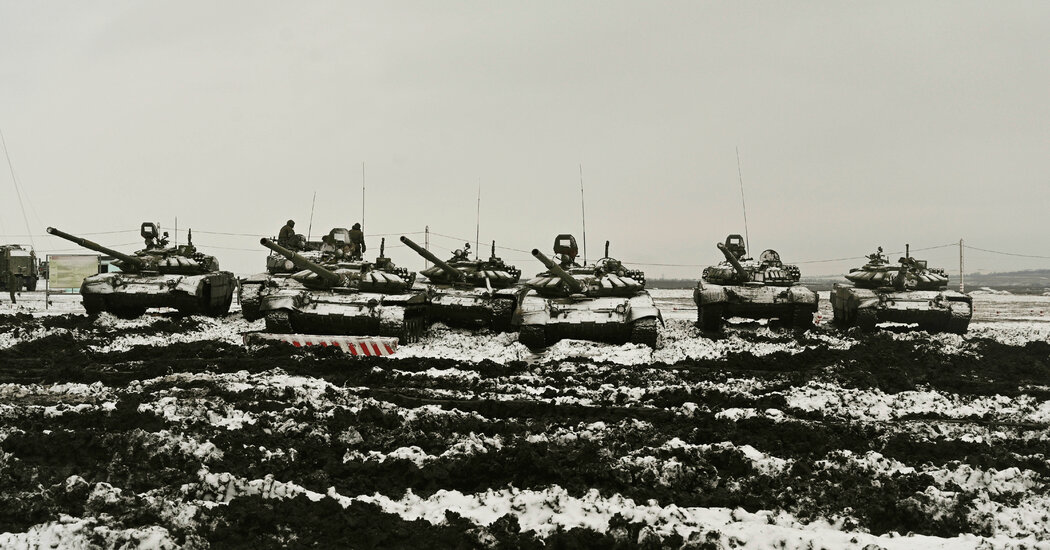 VIENNA — No one expected much progress from this past week’s diplomatic marathon to defuse the security crisis Russia has ignited in Eastern Europe by surrounding Ukraine on three sides with 100,000 troops and then, by the White House’s accounting, sending in saboteurs to create a pretext for invasion.

But as the Biden administration and NATO conduct tabletop simulations about how the next few months could unfold, they are increasingly wary of another set of options for President Vladimir V. Putin, steps that are more far-reaching than simply rolling his troops and armor over Ukraine’s border.

Mr. Putin wants to extend Russia’s sphere of influence to Eastern Europe and secure written commitments that NATO will never again enlarge. If he is frustrated in reaching that goal, some of his aides suggested on the sidelines of the negotiations last week, then he would pursue Russia’s security interests with results that would be felt acutely in Europe and the United States.

There were hints, never quite spelled out, that nuclear weapons could be shifted to places — perhaps not far from the United States coastline — that would reduce warning times after a launch to as little as five minutes, potentially igniting a confrontation with echoes of the 1962 Cuban Missile Crisis.

“A hypothetical Russian invasion of Ukraine would not undermine the security of the United States,” said Dmitry Suslov, an analyst in Moscow who gave a closed-door presentation on the standoff to Russian lawmakers last month. “The overall logic of Russian actions is that it is the U.S. and NATO that must pay a high price.”

And as Ukrainians were reminded anew on Friday, as the websites of the country’s ministries were defaced in a somewhat amateurish attack, Russia’s army of hackers can wreak havoc in Ukraine, but also in power grids from Munich to Michigan.

It could all be bluster, part of a Kremlin campaign of intimidation, and a way of reminding President Biden that while he wants to focus American attention on competing and dealing with China, Mr. Putin is still capable of causing enormous disruption.

The Russian leader telegraphed that approach himself by warning repeatedly in the past year that if the West crossed the ever-shifting “red line” that, in Mr. Putin’s mind, threatens Russia’s security, he would order an unexpected response.

“Russia’s response will be asymmetrical, fast and tough,” Mr. Putin said last April, referring to the kinds of unconventional military action that Russia could take if adversaries threatened “our fundamental security interests.”

The current crisis was touched off by the Kremlin’s release of a series of demands that, if the U.S. and its allies agreed, would effectively restore Russia’s sphere of influence close to Soviet-era lines, before NATO expanded into Eastern Europe. It has also demanded that all U.S. nuclear weapons be withdrawn from Europe, saying it felt threatened by their presence — though the types and locations of those weapons haven’t changed in years. And it wants a stop to all Western troop rotations through former Warsaw Pact states that have since joined NATO.

It has reinforced those demands, which the U.S. calls “non-starters,” with a troop buildup near Ukraine and repeated warnings it was prepared to use unspecified “military-technical means” to defend what it considers its legitimate security interests.

In response, the Biden administration has issued warnings of financial and technological sanctions if the Kremlin should follow through with its threats, particularly in regard to Ukraine. American officials say that for all the talk about moving nuclear weapons or using asymmetrical attacks, so far the U.S. has seen little evidence.

At a White House briefing on Thursday, Jake Sullivan, Mr. Biden’s national security adviser, declined to be drawn into the question of what kind of Russian action would trigger a U.S. response — whether, for example, the U.S. would respond to a cyberattack the way it would an incursion into Ukrainian territory.

“The United States and our allies are prepared for any contingency, any eventuality,’’ he said. “We’re prepared to keep moving forward down the diplomatic path in good faith, and we’re prepared to respond to fresh acts. And beyond that, all we can do is get ready. And we are ready.”

Of course, the most obvious scenario given the scale of troop movements on the ground is a Russian invasion of Ukraine — maybe not to take over the entire country but to send troops into the breakaway regions around the cities of Donetsk and Luhansk, or to roll all the way to the Dnieper River. At the Pentagon, “five or six different options” for the extent of a Russian invasion are being examined, one senior official reported.

Researchers tracking social-media footage have spotted numerous signs of additional Russian military equipment being shipped westward by train from Siberia. In Russia, state television has been filled with commentators’ warnings that Ukraine could soon attack Russian-backed separatists in eastern Ukraine — fitting with Washington’s allegation on Friday that Russian operatives, with specialties in explosives and urban warfare, have infiltrated Ukraine and might be planning to stage a provocation to justify an invasion. Russia denied the allegation.

Yevgeny Buzhinsky, a retired lieutenant general and a regular Russian television commentator, predicted a looming “limited” war provoked by Ukraine that Russia would win in short order through devastating airstrikes.

“There will be no columns of tanks,” General Buzhinsky said in a phone interview. “They will just destroy all the Ukrainian infrastructure from the air, just like you do it.”

In Geneva, Russian diplomats insisted there were no plans to invade Ukraine. But there were hints of other steps. In one little-noticed remark, a senior Russian diplomat said Moscow was prepared to place unspecified weapons systems in unspecified places. That merged with American intelligence assessments that Russia could be considering new nuclear deployments, perhaps tactical nuclear weapons or a powerful emerging arsenal of hypersonic missiles.

In November, Mr. Putin himself suggested Russia could deploy submarine-based hypersonic missiles within close striking distance of Washington. He has said repeatedly that the prospect of Western military expansion in Ukraine poses an unacceptable risk because it could be used to launch a nuclear strike against Moscow with just a few minutes’ warning. Russia, he made clear, could do the same.

“From the beginning of the year we will have in our arsenal a new sea-based missile, a hypersonic one,” Mr. Putin said, referring to a weapon that travels at more than five times the speed of sound and could likely evade existing missile defenses.

In an apparent reference to the American capital, he added: “The flight time to reach those who give the orders will also be five minutes.”

Mr. Putin said he would deploy such missiles only in response to Western moves, and President Biden told Mr. Putin in their last conversation that the United States has no plans to place offensive strike systems in Ukraine.

Russian officials hinted again in recent days about new missile deployments, and American officials repeated that they have seen no moves in that direction. But any effort to place weapons close to American cities would create conditions similar to the 1962 crisis that was the closest the world ever came to a nuclear exchange.

Asked about the nature of what Mr. Putin has termed a possible “military-technical” response, Sergei A. Ryabkov, a deputy foreign minister, said in Geneva on Monday: “Right now there is no reason to talk about what systems will be deployed, in what quantity, and where exactly.”

And when a Russian reporter asked Mr. Ryabkov in an interview broadcast on Thursday whether Russia was considering deploying military infrastructure in Venezuela or Cuba, he responded: “I don’t want to confirm anything or rule anything out.”

Moving missiles, however, is obvious to the world. And that is why, if the conflict escalates further, American officials believe that Mr. Putin could be drawn to cyberattacks — easy to deny, superbly tailored for disruption and amenable to being ramped up or down, depending on the political temperature.

Mr. Putin doesn’t need to do much to insert computer code, or malware, into American infrastructure; the Department of Homeland Security has long warned that the Russians have already placed malware inside many American power grids.

The Biden administration has sought to shore up U.S. systems and root out malware. The nation’s biggest utilities run an elaborate war game every two years, simulating such an attack.

But much of corporate America remains far less protected.

The fear is that if sanctions were imposed on Moscow, Mr. Putin’s response could be to accelerate the kind of Russian based ransomware attacks that hit Colonial Pipeline, a major beef producer, and cities and towns across the country last year.

The F.S.B., Russia’s powerful security service, on Friday announced the arrest of hackers tied to the REvil ransomware group — a gang connected to some of the most damaging attacks against American targets, including Colonial Pipeline. The move was welcomed by the White House, but it was also a signal that Moscow could flip its cyberwarriors on or off at will.

No one knows Putin’s next move, of course — not even his diplomats — and he likes it that way.

“There could be all sorts of possible responses,” Mr. Putin said when asked last month about the “military-technical” response he warned about.

“The Russian leadership is rather inventive,” said Andrey Kortunov, director general of the Russian International Affairs Council, a research organization close to the Russian government. “It’s not necessarily only about Ukraine.”

Analysts in Moscow believe that beyond a more threatening Russian military posture, the United States would be particularly sensitive to closer military cooperation between Russia and China. Mr. Putin will travel to Beijing on Feb. 4 to attend the opening ceremonies of the Winter Olympics and hold a summit meeting with the Chinese leader, Xi Jinping, Russia said on Friday.

The Kremlin has noted that Mr. Biden sees China, not Russia, as America’s most complex, long-term challenger — an economic, military and technological competitor that plays in a different league from Russia. Yet forcing the United States to increase its investment in a confrontation with Russia, analysts say, would undermine Mr. Biden’s greater strategic goal.

“The United States, objectively, does not want to increase its military presence in Europe,” said Mr. Suslov, the analyst. “This would be done at the cost of containing China.”