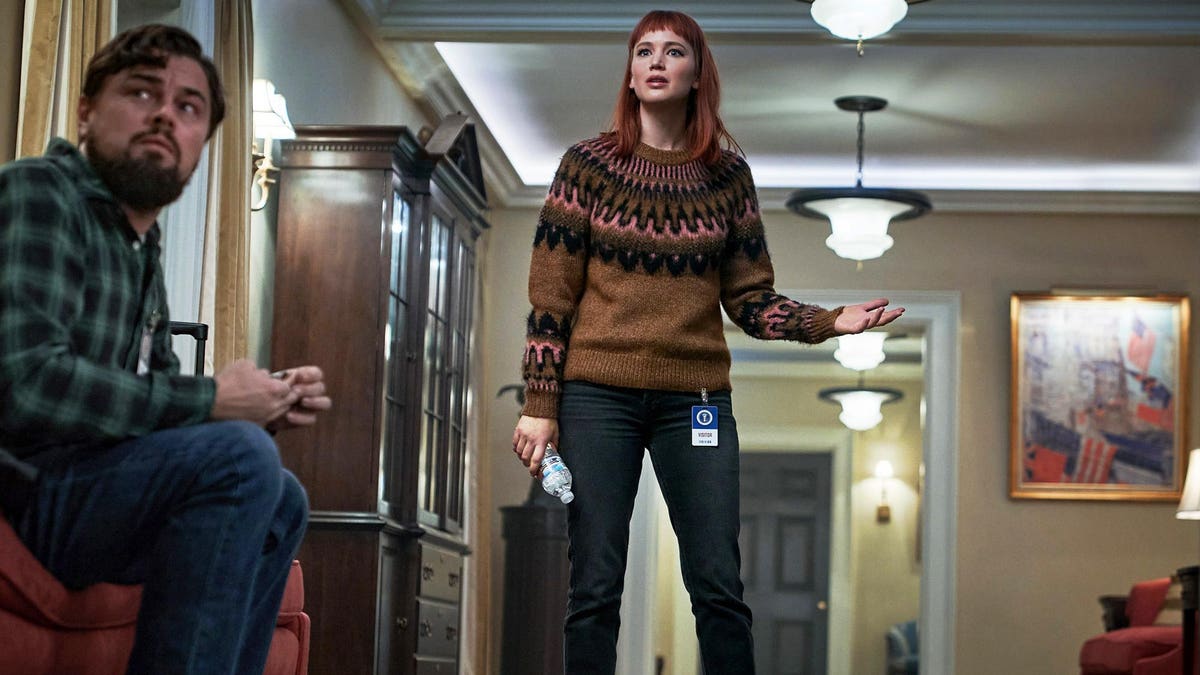 The thing about an Adam McKay film is that you never know exactly where he lands on an issue.

Kidding. You know exactly where he lands on an issue, and while Don’t Look Up isn’t Margot Robbie reading from a Finance Economics textbook in the bathtub, Don’t Look Up is a blunt instrument. Using the pointed disaster of an apocalyptic comet strike as a symbol for our collective inaction against climate change, Don’t Look Up boasts some unsubtle but often successful comedy, a wonderful performance by Leonardo DiCaprio, and a political point that needs said but lands with the delicacy of… well, an apocalyptic comet strike.

The film stars Jennifer Lawrence as Kate Dibiasky, whose research assistance discovers a large comet inevitably hurtling towards Earth. As an intelligent person, she panics, informing her colleague Dr. Randall Mindy (Leonardo DiCaprio) that the Earth is indeed doomed. The pair proceed to try every available measure to get an increasingly absurd world to take its own demise seriously in what is an extremely bleak array of gallows humor.

At its core, the film is a largely smart (yet entirely on-the-nose) satire. It exhibits so many contributing factors that impede our response to crises, from opportunistic politicians with conservative bents to the vapid, fluffy energy of modern news; the perils of celebrity obsession on the news cycle to the pitfalls of the celebritization of select scientists balanced against the silencing of others. The multifaceted look into why we don’t do what needs to be done in the face of apocalyptic crisis has a number of virtues—McKay is surely calling attention to something that needs attention—but the extensive focus produces some highly relevant pitfalls in practice.

On the one hand, if the purpose of the film is to satirically point fingers at every single factor keeping us from pivoting towards a serious climate change response, then good… it’s the nuclear option, where perhaps lighter satirical touches falter and fall. In a world full of subtlety in the face of impending doom, Don’t Look Now is an attempt at a wild satirical knockout punch if ever there was one.

On the other hand, the multifaceted approach has its dangers, and nearly all manifest here. There is so much… SO MUCH in the film that it has to be a long endeavor. And at 2:25 (for what is ostensibly a comedy) it could afford to be a little leaner, a little cleaner, and while much of it is breezy you really feel the length at times. Additionally, the exhaustive comprehensiveness at times starts to feel a little less like a film and a little more like a dissertation… ironic given its grounding in the academic from essentially frame one.

That isn’t to say that the film is wholly unfunny. It’s full of irony that often lands, alongside a great and complex comedic turn by DiCaprio and a lot of larger-than-life characters that nowadays feel unfortunately quite real (Tyler Perry’s Jack Bremmer and Cate Blanchett’s Brie Evantee easily come to mind). It also boasts a pitch black, bleak ending that screams “I told you! I told you!” from the top of its rhetorical lungs… surely not everyone’s cup of doomsday tea but, with the coda at the end, the ending lands.

Beyond its overdrawn length and too-full quiver of plot threads, a lot of the film’s central assets are underused despite all the real estate inherent in a massive runtime. Most notably, Jennifer Lawrence is extremely underutilized, reduced to a crying pile of anxiety for a good deal of the film before a descent into raw nihilism. I get it, she’s the film’s moral center, the only person truly reacting to the crisis before all goes to hell and the film gets to show how the world treats someone who actually cares. At the same time… it would be a little nice for Lawrence to have had a character who isn’t merely a singular, raw pile of emotional freakouts.

Don’t Look Up is by no means a bad film. It’s a film with a purpose, one somehow angrier than McKay’s The Big Short. There are a ton of moving parts that he manages to bring together successfully to an impressively large extent, and the film boasts some great character turns. In watching the film, this critic largely enjoyed it… and yet it remains messy, simultaneously overlong and underdeveloped, and it takes on its target with such a single-minded, beat-you-over-the-head approach that it makes Aronofsky’s mother! seem downright understated. There’s so much going on that it’s hard to criticize it in any concise form with a coherent structure. It’s a lot, but somehow it’s almost certainly Adam McKay’s best film of the more serious variety. The only way to watch Don’t Look Up: turn the lights off, Don’t Look At The Runtime, and try and meet it where it’s at as a film literally demanding to be heard.