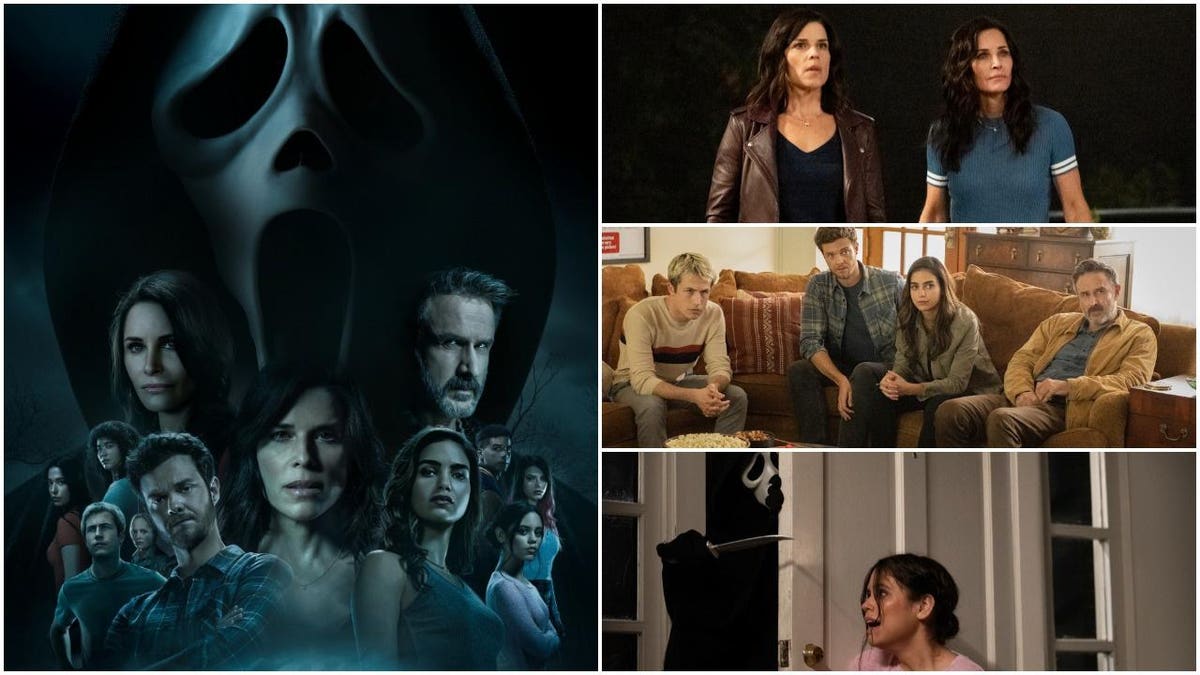 It’s both a sharp commentary on nostalgic legacy sequels and, by default, a glorified rehash that can’t help but repeat their mistakes. Still, it’s bloody good fun.

Scream, written by James Vanderbilt and Guy Busick, with the duo behind Ready or Not (Matt Bettinelli-Olpin and Tyler Gillett) taking over for the late Wes Craven in the director’s chair, is a have your cake and eat it too sequel. It very much wants to comment upon the new wave of legacy sequels, correctly noting that too many of them are glorified remakes of the first film which hold up the original as the only one of value. Alas, in a way that perhaps can’t be helped by virtue of the story it’s telling, it eventually becomes a glorified remake of the first Scream which almost entirely ignores the events and consequences of the earlier follow-ups. Like 22 Jump Street, it earns points for commenting upon its redundancy while still making audiences go through the motions.

This film does open with a loose reimagining of the initial Drew Barrymore murder that started it all. The biggest shock is that it’s exactly what you expect, making it the weakest curtain raiser of the series. The initial violence inflicted upon young Tara (Jenna Ortega) brings the victim’s sister (Melissa Barrera) back to Woodsboro after years of estrangement. Follow-ups attacks affirm that Sam is indeed being targeted, and in desperation Sam tracks down retired former sheriff Dewey Riley (David Arquette), who has retreated into alcohol after losing his job after splitting with Gale Weathers (Courtney Cox). More than that you don’t really need to know. There are explicit connections to the characters from the original movie, including one “twist” that is refreshingly spelled out almost immediately, while a few “legacy” characters show up in organic and logical ways.

If Scream (whose confusing title makes sense in context) repeats some of the missteps of Scream 4 (a legacy sequel before they were cool), including becoming a feature-length treatise of its own irrelevance, it’s also more moment-to-moment entertaining than either of the last two mediocre installments. There are too many beats that rehash the first film (having characters point that out only gets you so far), and a few unconventional opportunities not taken (a classic “choose who lives or dies” moment becomes a bluff). However, absent the notion that this fifth Scream must artistically justify itself or live up to the sky-high standards of the first two modern classics, it’s an above-average slasher movie that offers its best counterpoint to “elevated horror” just by being a big-scale, multi-location, ensemble movie that benefits from a big screen.

While too much of it is lensed by Brett Jutkiewicz in almost extreme close-up (the better to be watched on a cell phone in two months?), Scream does keep the size, scope and visual polish of its predecessors. The individual set pieces get the job done, offering both in-the-moment suspense and some genuine variety. We get a brutal attack in broad daylight and cat-and-mouse hospital-set centerpiece that’s better than what we got in Scream 4. Alas, not unlike Ghostbusters: Afterlife, Scream’s third act slowly turns into a remake of Scream, which means we lose the “okay, never seen that before” element. The climax, including the usual big reveals and extended monologues, offers up the movie’s reason for existing, but it also means we must sit through a rehash of something we’ve seen in the first and last Scream movies.

I haven’t really commented on the characters because frankly they don’t make much of an impression. Like Scream 4, the film falls into what I guess you can call True Detective season 2–syndrome (where everyone talked like Matthew McCaughey’s Rusty Cole) whereby everyone in the cast comments on and has opinions about horror movies and specifically the Scream series (personified by the in-universe Stab franchise). Aside from the obvious showboat moments afforded to the eventual murderer(s), Jasmin Savoy Brown gets the big “Here’s what this movie’s about!” comic monologue and some fun interplay with her brother (Mason Gooding) and fellow gal-pal (Mikey Madison). Kyle Gallner gets the film’s “good sport” award, presumably having filmed all of his scenes over a lunch break, while Barrera continues Neve Campbell’s “legacy” of being an arguably overqualified actress as the new protagonist.

The screen time afforded to the star trio is relatively limited. Unlike too many legacy sequels (including The Matrix Resurrections, with which Scream would have a fascinating “self-loathing” double-bill), this one doesn’t neglect its new/young/diverse protagonist(s) in favor of the franchise vets. Campbell, Arquette and Cox are around exactly as much as needed, although they do dominate the second act to the detriment of the newbies. Arquette and Cox are estranged and sad about it in a way that’ll remind you of Harrison Ford and Carrie Fisher in The Force Awakens, although I assure you Campbell doesn’t just show up on an island right before the credits roll. I’m not sure any of the surviving newbies could anchor a “just us” sixth installment, but the Scream television show was mostly enjoyable sans any connection to the originals.

Scream plays in the same sandbox as Scream 4, including becoming a feature-length screed on why it shouldn’t exist. It’s also another example of how commenting on the redundancy doesn’t save us, the audience, from having to sit through a rehash. That said, it’s a better, more enjoyable movie than the deathly dull (save for Emma Roberts’ third act showcase) prior installment, and it’s not as aggressively stupid or neutered as Scream 3. It’s an intense, gruesome and violent slasher movie (there’s not much variety in the carnage, but there’s at least one genuine “look away” kill), with a story that at least feels more like “Scream in 2022” (with on-point commentary on toxic fandom) than did Scream 4 feel like it took place in 2011. Scream is, by default, the first good Scream in 24 years.