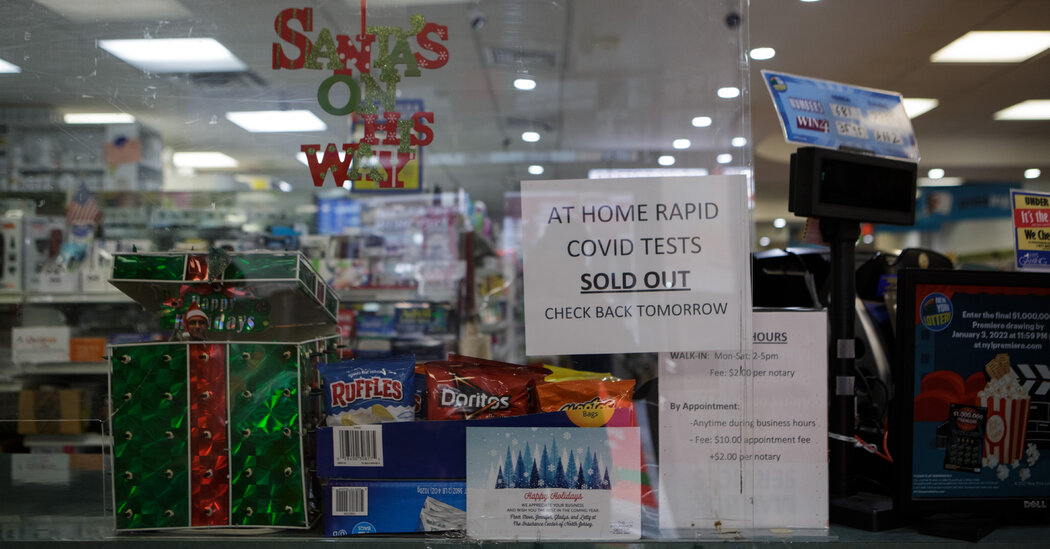 President Biden’s coronavirus response coordinator said Wednesday that, beginning next week, Americans struggling to get tested for the coronavirus will be able to have the cost of rapid at-home tests reimbursed by their insurers, but offered no specific promises about when free tests would be available.

The remarks by Jeff Zients, who leads the White House pandemic response, come two weeks after Mr. Biden said his administration would buy half a billion rapid tests to distribute free to the public, and that insurance companies would begin reimbursing people for tests they purchased on their own. Mr. Biden said at the time that the free tests would be available “in the coming weeks.”

With the Omicron variant of the coronavirus fueling a sharp rise in cases across the country, demand for all kinds of tests is far outpacing supply. In some areas, people are waiting in long lines to take the highly sensitive polymerase chain reaction, or P.C.R., tests that are administered at medical clinics. Rapid at-home tests are flying off pharmacy shelves.

“We know this remains frustrating for people getting tested in many parts of the country,” Mr. Zients said on Wednesday. “So we are working to do all we can.”

The administration’s new “test to stay” guidance for schools, in which students exposed to the virus can remain in the classroom if they test negative, is among the factors driving up demand for the rapid tests.

Last week, when Dr. Rochelle Walensky, director of the Centers for Disease Control and Prevention, omitted a testing requirement from new isolation guidelines, she was greeted with a chorus of criticism from public health experts who said a negative test should be required before an infected person ends a five-day isolation period.

On Tuesday, the C.D.C. amended the latest guidance — not to say that testing was required, but to say that people who wanted to end their isolation periods after five days and had access to tests may choose to take them. If the test results are positive, they should stay home for another five days, the guidance says; if negative, and their symptoms are resolving, they may go out, but should continue to wear masks in public for another five days.

Addressing reporters on Wednesday, Dr. Walensky said she omitted a testing requirement from the guidance because rapid tests are not authorized by the Food and Drug Administration to determine whether someone is infectious to others; they are authorized merely to detect infection, and are meant to be used serially, as is the case in schools.

But after the guidance was released, she said, “it became very clear that people were interested in using the rapid tests,” and since that was the case, she at least wanted to “provide guidance on how they should be used.”

The recommendation for the general public is different from the one for health care workers, who are required to test negative before going back to work. Dr. Walensky said the C.D.C. was always more conservative in its recommendations for health workers, because they care for vulnerable people, including those with weak immune systems.

Matching testing supply with demand has been a challenge for both the Trump and Biden administrations. Early in the pandemic, there was a shortage of tests and the components that make up test kits. By late 2020, manufacturers had expanded production. But once vaccines arrived, the Biden administration put less emphasis on testing. Demand plunged, and manufacturers pulled back.

Now the manufacturers are running at full speed again. Mr. Zients said manufacturers would begin delivering rapid tests kits to the federal government next week, and that the administration would set up a “free and easy system, including a website” where Americans could order them.

Jen Psaki, the White House press secretary, told reporters on Wednesday that new federal testing sites would open this week in the District of Columbia and Philadelphia, followed soon after by Maine, Maryland, Nevada, Delaware, Texas and Washington state. She noted that mobile testing sites were already open in New York City and New Jersey.