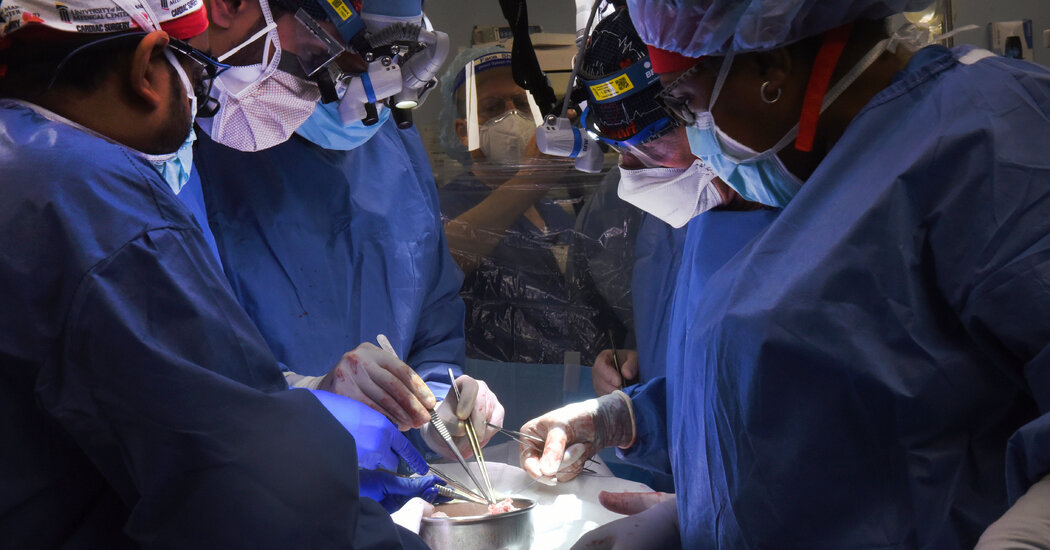 An ailing Maryland man who received a pig’s heart last week in a pioneering transplant procedure has a criminal record stemming from an assault 34 years ago in which he repeatedly stabbed a young man, leaving him paralyzed.

The victim, Edward Shumaker, spent two decades in a wheelchair, paralyzed from the waist down, and suffered numerous medical complications including a stroke that left him cognitively impaired, before he died in 2007 at age 40, according to his sister, Leslie Shumaker Downey, of Frederick, Md.

The Washington Post first reported the transplant patient’s criminal record and the assault that led to it on Thursday. The revelations have prompted debate about how patients are selected for cutting-edge medical care.

The patient, David Bennett Sr., 57, is being closely monitored at the University of Maryland Medical Center for signs that his body is rejecting a heart received from a genetically modified pig. He was still doing well on Thursday, hospital officials said.

The assault occurred on April 30, 1988, when Mr. Shumaker, 22, was having a drink at a bar and talking with Mr. Bennett’s wife. In an apparent fit of jealousy, Mr. Bennett stabbed Mr. Shumaker in the back repeatedly.

The assault and its aftermath devastated the family, Ms. Downey said. “It crushed my parents,” she said. “It was just hell.”

He was charged with assault, battery and maiming with intent to murder, according to court records obtained by The New York Times, but was convicted on lesser charges of battery and carrying a concealed weapon and was sentenced to 10 years in prison. He was also ordered to pay Mr. Shumaker $29,824 in restitution, but Ms. Downey said he did not comply.

In an attempt to recover his substantial medical costs, Mr. Shumaker and his family sued Mr. Bennett and were awarded $3.4 million in damages, court records show. Ms. Downey said the family never received any money.

“The transplant gave him life,” Ms. Downey said of Mr. Bennett. “But my brother never got a second chance at life. Ed struggled every day for 19 years. No one deserves what he went through.”

But Mr. Bennett’s doctors said that such unsettling histories do not disqualify patients from getting cutting-edge medical procedures.

Officials at the University of Maryland Medical Center, where the transplant operation was performed, said in a statement that health care providers were committed to treating all patients, regardless of their backgrounds or life circumstances.

“It is the solemn obligation of any hospital or health care organization to provide lifesaving care to every patient who comes through their doors based on their medical needs,” the officials said.

“Any other standard of care would set a dangerous precedent and would violate the ethical and moral values that underpin the obligation physicians and caregivers have to all patients in their care.”

Through the medical center, Mr. Bennett Sr.’s son, David Bennett Jr., who was a young boy when the assault took place, declined to comment on his father’s criminal background.

“I do not wish to speak about my father’s past,” he said in a statement provided through the University of Maryland. “My intent is to focus on the groundbreaking surgery and my father’s wish to contribute to the science and potentially to save patient lives in the future.”

Doctors do not usually vet patients for whether they are deserving of treatment, said Karen J. Maschke, a research scholar at the Hastings Center and editor of Ethics & Human Research.

“There’s a longstanding standard in medical ethics that physicians don’t pick and choose who they treat,” she said. The question has arisen in the context of incarcerated people and enemies in war, and more recently people with Covid who chose not to get vaccinated, she noted.

“Where would you draw the line if you picked and chose?” Dr. Maschke asked.

The outrage expressed on social media toward Mr. Bennett Sr. is not justified, argued Arthur Caplan, professor of bioethics at N.Y.U. Grossman School of Medicine. The transplant is not only the first of its kind — it is highly experimental and may well fail, he said.

“To be clear, he didn’t take a human organ from anybody,” Dr. Caplan said. “Nobody died because this guy got a pig heart.”

The heart transplanted into Mr. Bennett came from a genetically engineered pig provided by Revivicor, a regenerative medicine company in Blacksburg, Va.

The pig’s genome carried 10 modifications, including genes inactivated in order to reduce aggressive human rejection responses, and to prevent the heart from continuing to grow after it was implanted.

There is an acute shortage of organs for people with failing kidneys, hearts, lungs and other organs, and the hope is that perfecting the science of transplanting organs from genetically altered animals will usher in a new era when patients will no longer die while waiting for a replacement kidney or heart.