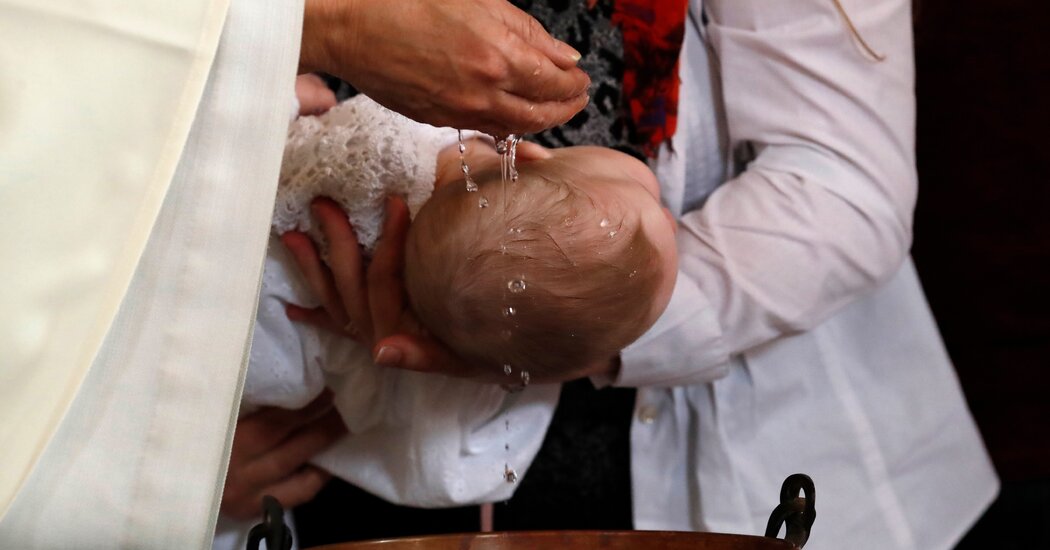 The Rev. Andres Arango was leading a baptism at St. Gregory Catholic Church in Phoenix last year when some people in the pews heard a slight variation in the religious ritual.

“We baptize you in the name of the Father and of the Son and of the Holy Spirit,” Father Arango said, his voice echoing in the church as he poured the holy water.

But there was a problem.

Saying “we baptize” was incorrect. The Vatican instructs priests to say “I baptize,” and if it is not said that way the baptism is deemed invalid.

Church leaders investigated and determined last month that Father Arango had incorrectly performed thousands of baptisms over more than 20 years, meaning those he had baptized in Phoenix and at his previous parishes in Brazil and San Diego were not properly baptized.

The oversight has caused headaches for those now seeking answers about whether their faulty baptisms have spilled over into other elements of their Catholic faith. For instance, would it affect those who were married by the church?

“Maybe! Unfortunately, there is no single clear answer,” the Diocese of Phoenix answered online.

Father Arango, who did not respond to calls on Sunday seeking an interview, apologized in a statement and said he was resigning as pastor of the parish, effective Feb. 1.

“It saddens me to learn that I have performed invalid baptisms throughout my ministry as a priest by regularly using an incorrect formula,” he said. “I deeply regret my error and how this has affected numerous people in your parish and elsewhere.”

Thomas J. Olmsted, the bishop of the Diocese of Phoenix, said in a statement that he did not believe Father Arango “had any intentions to harm the faithful or deprive them of the grace of baptism and the sacraments.”

The Catholic News Agency reported on the botched baptisms this month.

In the Catholic faith, a baptism is a sacrament in which people, often infants, have water poured over their foreheads, symbolizing purification and admission to the Church. It is a “requirement for salvation,” according to the diocese.

Adhering to the baptismal formula is “extremely important to continue the tradition of the Church,” said Neomi De Anda, a professor of religious studies at the University of Dayton in Ohio.

“It is not meant to be legalistic but about communion,” she added.

Indeed, the Diocese of Phoenix addressed the specific rules by creating an F.A.Q. section on its website about the case of Father Arango.

Just as a priest should not use “milk instead of wine during the Consecration of the Eucharist” — when the Catholic faith says that the wine becomes the blood of Christ — a priest should also not alter the wording of the sacrament of baptism, the diocese said.

The milk would not become the blood of Christ, the diocese said, and, similarly, a wrongly worded baptism would not purify a person.

Sandra Yocum, a professor of faith and culture at the University of Dayton, said that if a priest said “we,” it would imply that the source of the grace of the baptism came from the community, whereas saying “I” would correctly assert that “it’s God doing this work of grace” through the priest.

“In baptism, part of what makes it valid is the words that are used, and so that becomes significant,” Ms. Yocum said. Church officials might have been worried about setting a precedent if they suggested “these words are not that important,” she added.

The Congregation for the Doctrine of the Faith, a Vatican office that interprets doctrine and handles cases of misconduct, replied firmly when asked in 2020 if it was acceptable to use “we.”

That notice from the Vatican made some other priests wonder if they had been incorrectly baptized.

In 2020, the Rev. Matthew Hood of the Archdiocese of Detroit saw a video of his own childhood baptism and realized that the deacon had said “we.” Father Hood, as well as others who were baptized by that deacon from 1986 to 1999, had to then be properly baptized.

In Oklahoma City, the Rev. Zachary Boazman also saw a video of his childhood baptism and realized in September 2020 that the same thing had happened to him, too.

Father Arango “remains a priest in good standing” and is still living and serving in the Diocese of Phoenix, Katie Burke, a spokeswoman for the diocese, said.

“His voluntary resignation allows him to dedicate his full-time ministry to helping and healing the families who were affected by this error,” Ms. Burke said.

Some members of St. Gregory Catholic Church, however, had wanted him to remain their priest, and a petition was circulated to keep Father Arango as the church’s pastor.

“Rather than giving Father Andres the opportunity to stay at St. Gregory and rectify the situation,” the petition said, “he is being removed from a community that loves and cares for him.”

A video shows dozens of people attending a farewell celebration for Father Arango in January.

In his letter to parishioners, he wrote, “I sincerely apologize for any inconvenience my actions have caused and genuinely ask for your prayers, forgiveness and understanding.”