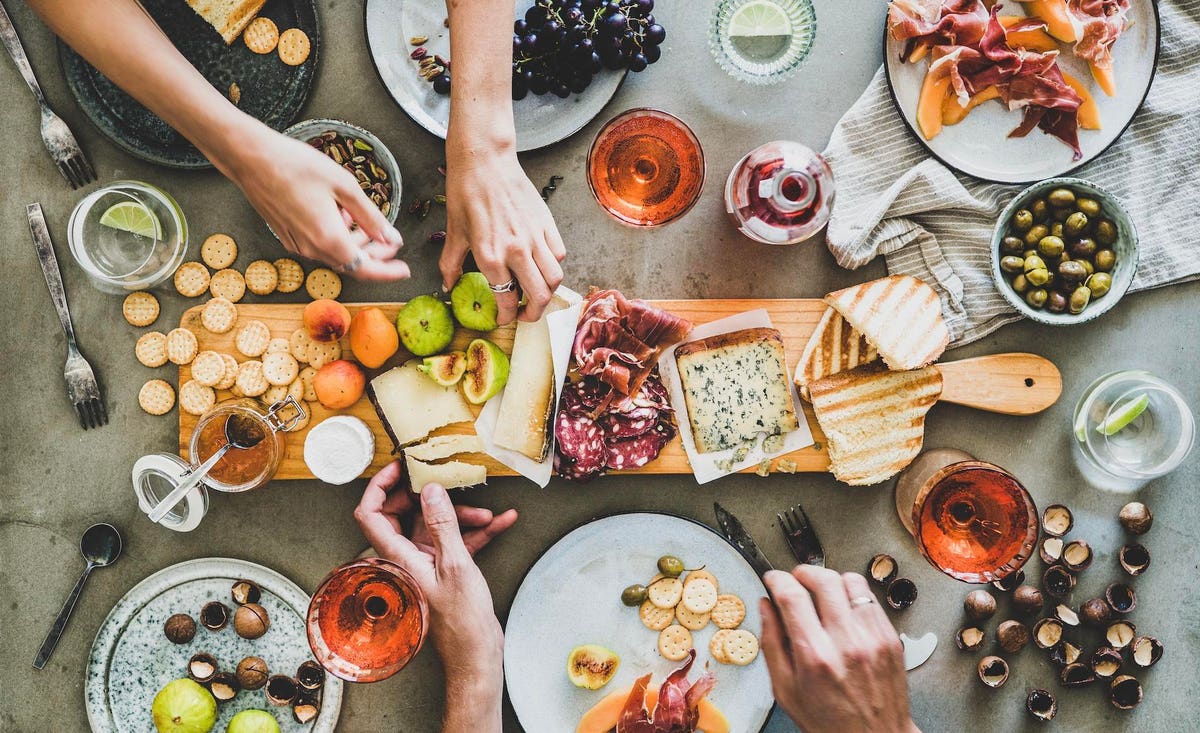 The grocery store is one of the most common places I see folks splurging. Yes, believe it or not, it is so easy to overspend unnecessarily at the grocery store. Before I get into my favorite food shopping tips, I want to make two important points.

First: Budgeting your grocery shopping is probably a game-changer for you if you’re at a point in your life where you’re making enough money to be able to treat yourself every now and then without breaking into hives. However, that’s not everyone’s situation.

I know there will be readers out there who know exactly how much they can spend on groceries because money is tight— and I’ve been there. There will also be readers out there who have struggled with food insecurity— I’ve been there too. So, if grocery store budgeting feels beyond your reach right now, just a reminder that we’ll get you there; and when we do, you’ll be ready with the budget to knock it out of the park.

Second: I want to make myself extremely clear here: I am not saying that you should buy less food than you need. That is not how to budget. In fact, if you’re budgeting correctly at the grocery store, you should be able to buy exactly as much food as you need.

Now, for some tips.

I recommend that groceries should comprise about 5-10% of your budget (and PS— you can find all of my tips on putting together a budget here). Sure, your grocery expenses depend on how many people you are feeding; but, it’s a bit of an oversimplification to think that single people spend less money on food automatically. For starters, if it’s just you, it’s easier to say, “Oh, I don’t want to cook a whole big thing for just myself… I’ll just order in.” And, because you’re flying solo, you don’t have that accountability buddy with you to say, “Hey, this delivery fee is kind of nuts… let’s cook instead.” Also, most grocery stores don’t sell single servings of stuff like tomatoes or spaghetti. If you buy a pound of meat and eat only one portion, that’s not saving anything—it’s just a waste of money.

Keep close track of how much money you spend on food, and I mean everything— groceries, dinners out, the snack you bought at the gas station—and see if what you’re spending is within that 5-10% range of your spending plan. Then, ask yourself: are you actually using what you buy? If not, quit buying it.

Did you know that Americans throw away around $165 billion worth of perfectly good food every year. In fact, 40% of all the food in the United States today goes uneaten. Are you guilty of this? I mean, it’s not that hard to do, right? You go grocery shopping without a list and you buy random ingredients that don’t actually work with anything you have at home; or, you find a new recipe that you just have to try, so you go grocery shopping again and all the food you got on your last trip gets pushed to the No-Man’s-Land section of your fridge.

Instead of scrolling through TikTok for new recipes, look at what you already have and put those ingredients into Google. Let’s say on your last grocery trip, you got leeks and strawberries. Google “recipe with leek and strawberry.” It’s that simple. And along the way you’ll learn about new recipes that may become your next favorite meal!

If you’re reeling from that stat I gave you about food waste, I have a solution for you: there’s this app that I love called Too Good To Go which tells you the spots in your neighborhood that are putting food on-sale that they would have to throw out at the end of the day; and I’m not talkin’ milk that is two days expired— I’m talkin’ two dozen perfectly good same-day baked bagels. And, you’re getting them for pennies on the dollar. So you save money, and combat food waste. That’s a textbook win-win, right?

This one’s for the foodies.

Maybe you’re a foodie and you’re thinking “5% of my spending plan should go to groceries?! But I spend 20% and I can’t trim any fat, so to speak.” Well, Gordon Ramsay, I’d say this: how much are you spending on extravagant meals out? How often do you download a recipe and notice that you’re missing three spices and rush the grocery delivery because you just have to make Moroccan tonight. I hate to break it to you, but if you’re splurging on going out to dinner or extravagant meals at home, that’s exactly what it is: a splurge. Not essential. But that doesn’t mean you should never do it! Throw these costs into the “extras” category and budget for some treats.

And for the other side of the spectrum, you snack connoisseurs who are down for Fritos for dinner: yes, packaged foods and snacks with a million ingredients you can’t pronounce might be perpetually on-sale and seemingly cheap and easy, but you don’t need to compromise your health for cost. Yes, organic food should be more easily accessible, I totally agree, but you’d be surprised if you just Google “cheap healthy meals” how many great recipes come up.

Plus, studies have shown that buying healthy food and cooking at home (as opposed to “cheap” fast food and prepared meals) is actually less expensive in the long run: a typical family of four will spend nearly $30 for a meal at the drive-through window, while a basic and nutritious meal of rice, beans and fresh vegetables makes enough for a few days’ worth of left overs for less than $10. Winner, winner, tofu dinner!