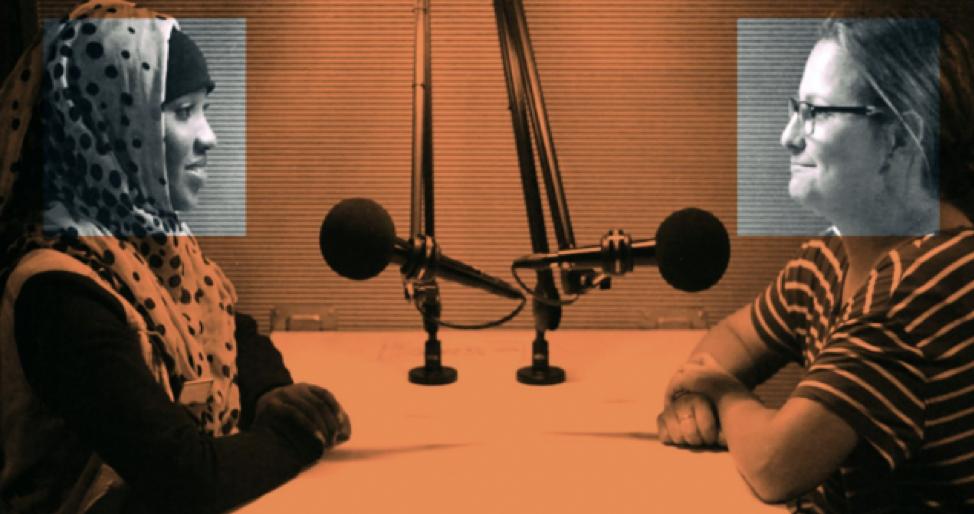 Last night, on 60 Minutes, Dave Isay, the creator of Storycorps, discussed his latest project called “One Small Step.” Storycorps started nearly 20 years ago as a way for people to memorialize their feelings about someone close to them through recorded discussions. The idea is for two people who have a relationship to say to each other what they would say if they had “40 minutes left to live” or to discuss an important person in both of their lives and what that person meant to them. There are stories of what a father means to a little boy in Mississippi, a gay married couple who first met when one of the men was 75 years old and what a decorated fighter pilot who died years ago meant to his daughter and son.

“One Small Step” is an offshoot of Storycorps and employs some of the same techniques, but the goal is very different. This project was conceived as a small way to begin to get us out of what Isay calls the “Hate Industrial Complex,” meaning the media on all sides of the political spectrum profiting from our current “culture of contempt” for one another. “One Small Step” involves two people on different sides of the political spectrum sitting down, not to talk about politics, but rather to talk about their lives and what they have in common. The simple idea is that it is hard to hate someone who is also having trouble with a school-aged child, or who also likes to bake on the weekends, or enjoys walking his dog at sunset.

Together with my partner Charles Henderson, I have spent the past year and a half trying to understand how we relate to each other, particularly in the workplace. Charles is a former heroin addict and convicted felon who turned his life around to graduate from the Wharton School at the University of Pennsylvania and eventually to earn an MBA from Harvard Business School. Charles has worked on corporate leadership and racial healing in post-apartheid South Africa for the past 25+ years. His amazing life story and the frank way he communicates it provide a powerful way in to the hearts and minds of the people whose lives he touches.

In the immediate wake of George Floyd’s brutal murder in May of 2020, Charles and I were asked to have a conversation, first with each other and then with the participants in a Covid-confined 10th Reunion Zoom session at Harvard Business School. That frank discussion and the feelings it evoked about race relations and the divisions in this country, led us to set out on a now 18-month journey to reveal what is going on out there and how it can be fixed. From our first-hand research, we concur wholeheartedly with One Small Step’s Isay who correctly asserts that no one was every convinced to change her mind by first being called a moron or an idiot. Few people, if any, and especially not an economically disadvantaged White person, will be persuaded that he should consider the particular plight of what it means to be Black in America by being told he is bad and shameful because he has enjoyed “White privilege” all his life.

After hundreds of conversations with employees, managers, CEO’s, entrepreneurs, educators, family members, friends, classmates and random strangers, we have determined that the best way out of polarization in the workplace, and indeed in society at large, is through dialogue and narrative—in other words, through conversation, empathic listening and storytelling. In corporate America, as in the society of which it is a reflection, the best way out of our current state of toxic politics and disillusionment, is through an understanding of the stories of others. And there is evidence that this is a particularly effective cure for what currently ails us. Josh Kalla and David Broockman, political scientists at Yale and Berkeley respectively, have shown that deep canvassing, meaning hearing the stories of others about whom we may hold negative feelings and opinions, can reduce what they call “exclusionary attitudes.”  Specifically, they were able to document a marked reduction in the negative feelings toward transgender people after those holding the negative views heard the stories of the unique struggles of transgender individuals.

Yesterday, I wrote about what we can learn from White people who grew up steeped in racist attitudes but who rejected those attitudes in favor of becoming advocates for racial justice. These people have a lot to teach us about empathy, compassion and courage. Most of them share the ability to empathize with others’ suffering as a result of their own very different, but no less painful struggles. They tend to have friends or family members of a different race and share an open-hearted willingness to be transformed by the stories of people who are not like them. And finally, they have the courage to go against the grain of the culture within which they were raised.

One Small Step involves all four of these traits—empathy, compassion, personal experience and courage, and it is a very hopeful effort to begin the journey toward reversing the culture of contempt to create a culture of compassion; to see, as Dave Isay says, the “flame of good” in each person we encounter, no matter their political views or beliefs.