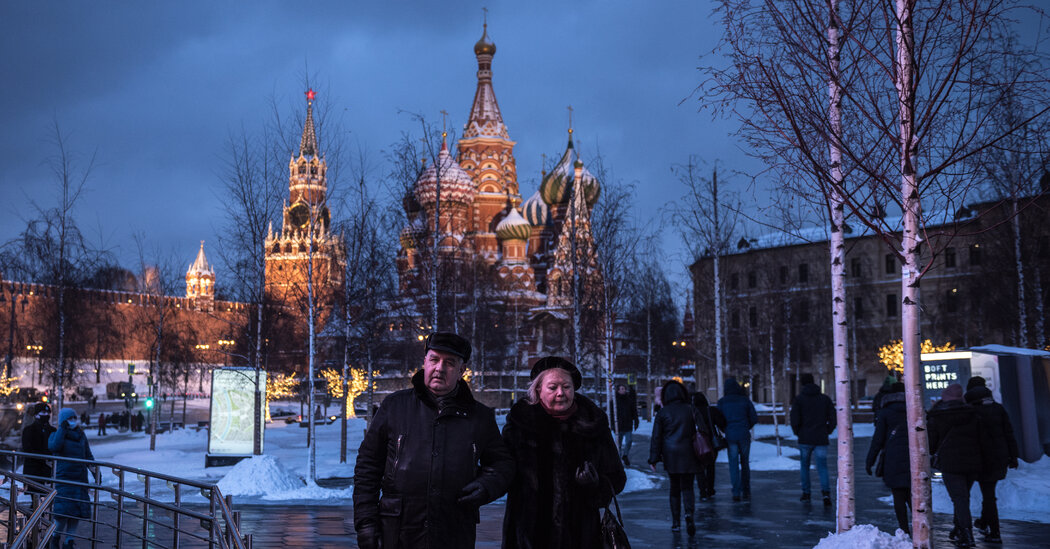 MOSCOW — After touring the grand, marble-clad Victory museum in Moscow, dedicated to the Soviet Union’s triumph over Nazi Germany in World War II, the two visitors concluded that the situation today is not all that different: Russia is under attack again.

“America badly wants to start this war,” said Olga A. Petrova, a retiree, referring to the simmering conflict between Russia and the West over Ukraine. “NATO wants to bring its troops to our borders, they looked for our weak spots and they found Ukraine,” she said, adding that Americans “don’t even know where Ukraine is on the map.”

Mrs. Petrova’s conviction that the United States is fomenting war between Russia and Ukraine reflects the thinking of many Russians, including her companion, Tamara N. Ivanova, who watches the two main talk shows on the country’s state-run television channels.

It is a message hammered home daily by the Kremlin’s propaganda machine.

Russians argue over a host of domestic issues, like the government’s response to the coronavirus pandemic or ballooning inflation. Others, fed up with the Kremlin’s manipulation of the news media, have just opted out. But there is one thing many seem to agree with President Vladimir V. Putin about: If war does come, it will be the Americans’ fault.

The Levada Center, one of the few independent pollsters in Russia, says that 50 percent of Russians see the United States and NATO as responsible for rising tensions. Fewer than 5 percent blame the Kremlin.

Ms. Ivanova says she can see clearly how people in Ukraine and the West “have been brainwashed.” Her steadfast support of the Kremlin line is not surprising, given that pensioners like her constitute the core of President Vladimir V. Putin’s base.

In past years, a subset of younger, chiefly urban people might have taken to the streets in protest, but dissenting voices have been muzzled by a crackdown on demonstrations, independent news media and rights groups that began in earnest a year ago. Scores of young activists have been detained, expelled from universities and driven out of the country.

In response, says Sergei Belanovsky, a sociologist who studies public opinion, many Russians, including the country’s youth, have just opted out of following the news.

Attending a retrospective show in an exhibition hall opposite the Kremlin on the life and career of Viktor Tsoi, a famous Russian rock musician, she allowed that she doesn’t pay much attention to politics, and that “all this talk about war is just empty.” With a shrug she added, “No one can explain this never-ending conflict.”

Darya Rokysheva, 19, an applied math student attending the exhibition, said that she, too, does not follow politics all that closely, and that she believes that conflict happens “between governments, not between nations.”

Mr. Belanovsky said that this sense of alienation from the news and issues facing the country is pervasive among Russians.

“This crisis is perceived by some as the edge of consciousness — something incomprehensible is happening to them,” he said. “They don’t want to delve into it, and they think there’s no point anyway.”

Yet, even among those who may oppose the Kremlin on one domestic policy or another, Mr. Belanovsky adds, when it comes to Ukraine and relations with the West, many people share Mr. Putin’s narrative of Russia as a besieged fortress.

Aleksei Izotov, 45, an IT entrepreneur, is one of them. He said that while he abhors systemic corruption in Russia and the fact that Mr. Putin is unwilling to give up power, when it comes to foreign policy the president “is doing everything right.”

He added: “I like it, and I think that I share the point of view of most people.”

Mr. Izotov said he does not watch state television, preferring to get his news from the internet, where outlets with a small but loyal following can still buck the Kremlin line. Nevertheless, he shares the view that the current Ukraine crisis has been provoked by the United States and NATO.

“America pursues its geopolitical goals in the post-Soviet space, it wants to divide Russia and post-Soviet countries,” he said, wearing a black sweater embossed with Mr. Tsoi’s signature slogan “We Need Change!”

Mr. Izotov said he sympathizes with Russia’s most prominent opposition figure, Aleksei A. Navalny, who was jailed last year for violating parole by leaving the country. Mr. Navalny had left to seek treatment for poisoning after what Germany and other Western nations said was a government assassination attempt.

But Mr. Izotov is fatalistic about Mr. Navalny’s chances of altering the existing order, believing that Mr. Putin will rule Russia until he dies and will protect his friends in power.

Even then, Mr. Izotov said he couldn’t say “the current president is evil, or an enemy.”

Many Russians share the belief that they are powerless to influence events, a sociologist, Grigory Yudin, recently told Ekho Moskvy, a state-owned but liberal-leaning radio station. The lack of public outcry is in stark contrast to the response in 2014, after Mr. Putin annexed Ukraine’s Crimean peninsula.

Back then, about 50,000 people came out to protest the military action in Moscow. Now, even an online petition circulating since Jan. 30 has received only 5,000 signatures.

“Citizens of Russia are becoming hostages of criminal adventurism, which is dictating Russia’s foreign policy line,” the authors of the petition, prominent Russian intellectuals, wrote.

“But no one asks the citizens of Russia,” they added. “There is no public discussion. Only one point of view is presented on state television, and that is the point of view of the supporters of the war.”

Ivan Preobrazhensky, an independent political analyst, says that Russians’ apathy, the belief in this case that a war is inevitable, has been reinforced by years of political oppression.

“The Russian society doesn’t want war, but its biggest part also came to terms that it is most likely inevitable,” he said in an interview. He added that, with every round of tension over Ukraine, “the Russian government induces people to think of war as routine.”

They are people like Sergei Ryzhkov, who works in construction, who said he doesn’t pay attention to the tensions over Ukraine.

“I am not interested,” he said. “It’s my opinion that these are just political showdowns.”

Still, said Mr. Belanovsky, the sociologist, if it comes to an actual war with real armaments and, inevitably, body bags, those attitudes could change.

“I think that such news will certainly reach the apolitical people,” he said. “And the reaction will be mostly negative.”

Arseny Filippov, 22, said he already feels the consequences of Russia’s posturing. “Before these events, traveling to Europe was affordable, and then the ruble just collapsed,” he said. An architect, Mr. Filippov said that he gets news from independent sources online and from foreign news outlets.

He said that he could not understand why, from the beginning of Russia’s conflict with Ukraine in 2014, the Kremlin took steps like annexing Crimea “given how damaging it all was for the country and its economy.”

He said that while he at first refused to believe that a war with Ukraine was inevitable, he is not so sure now, after two months of tensions.

“I very much hope that it won’t happen,” he said.