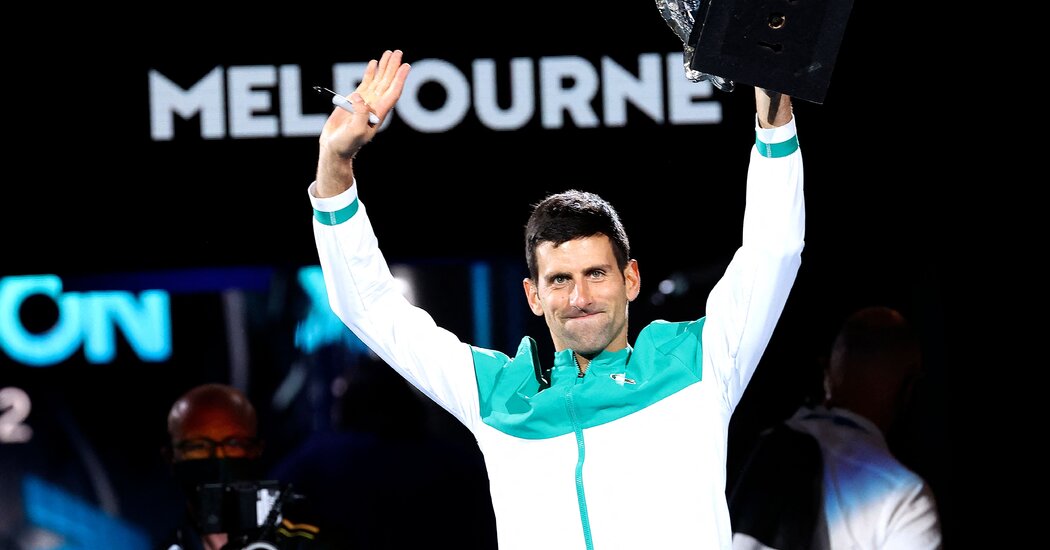 Novak Djokovic, the world’s No. 1-ranked men’s tennis player, traveled all day Wednesday from Dubai to Australia, a journey that was supposed to begin his defense of the Australian Open singles championship.

On Thursday, he was told he would need to leave the country, following a 10-hour standoff with government officials at a Melbourne airport, where he was held in a room overnight over the validity of his visa and questions about the evidence supporting a medical exemption from a coronavirus vaccine. The exemption was supposed to allow Djokovic, a 20-time Grand Slam tournament champion and one of the biggest stars in sports, to compete in the Australian Open even though he has not been vaccinated.

Djokovic did not immediately leave the country, and his team filed a legal challenge to the ruling on Thursday. A judge said Djokovic would be allowed to remain in Australia at least until Monday as his lawyers awaited a hearing.

A spokesman for the tennis star did not immediately respond to requests for comment. Hours later, fans waving Serbian flags gathered outside the Melbourne hotel where Djokovic was believed to be staying to protest the decision to reject his visa.

The chain of events represented a startling turnabout for Djokovic, who in a little more than 24 hours went from receiving special, last-minute permission to play in the Open, to boarding an intercontinental flight, to essentially being told by the prime minister of Australia that he was not welcome in the country.

At one point President Aleksandar Vucic of Serbia even got involved, speaking with Djokovic and criticizing the Australian government for its treatment of his country’s biggest sports star.

The pandemic has wreaked all manner of havoc with sports during the past two years. The Tokyo Summer Olympics were postponed for a year. Major events took place in empty stadiums. Star players have been sent into isolation just ahead of their competitions after testing positive for the virus.

The situation involving Djokovic, one of the most polarizing figures in tennis, was a match for any of them. It turned on a confrontation between a sports superstar and the most powerful leader in one of the world’s most prosperous countries, where government officials, citizens, the media and even some fellow players criticized the exemption, seemingly prompting the sudden shift.

The decision promises to become another flashpoint in the debate about vaccines and how the pandemic should be managed now, especially in Australia, where egalitarianism is considered a sacred principle — and where “the tennis,” as the Open is called, is also beloved by what often seems like an entire nation of sports fanatics.

The Novak Djokovic Standoff with Australia

In a statement Thursday, the Australian Border Force pledged to “continue to ensure that those who arrive at our border comply with our laws and entry requirements. The ABF can confirm that Mr. Djokovic failed to provide appropriate evidence to meet the entry requirements to Australia, and his visa has been subsequently canceled.”

For Djokovic, it was the latest and arguably the most wrenching controversy in a career that has been filled with them, nearly all of which have been brought on by the behavior of a champion who can be as willful and unbending off the court as he is on it.

Djokovic has never been shy about expressing his nontraditional views of science and medicine (he once voiced support for the idea that prayer and belief could purify toxic water), and he has stated on multiple occasions his opposition to vaccine mandates, saying vaccination is a private and personal decision. However, he had not revealed until this week whether he had been vaccinated.

On Tuesday, he announced on Twitter that he had received a medical exemption from the requirement that all people entering Australia be vaccinated or quarantine for 14 days upon arrival. He later boarded a plane bound for Australia from Dubai.

In a statement later that day, Craig Tiley, the chief executive of Tennis Australia, explained that players seeking an exemption had to pass muster with two panels of medical experts. The process included the redaction of personal information to ensure privacy.

“Fair and independent protocols were established for assessing medical exemption applications that will enable us to ensure Australian Open 2022 is safe and enjoyable for everyone,” Tiley said. “Central to this process was that the decisions were made by independent medical experts and that every applicant was given due consideration.”

Tiley said Wednesday in a television interview that 26 players had applied for an exemption and “a handful” had been granted. According to Tiley, 99 percent of the more than 3,000 people coming to Australia for the tournament were vaccinated. The handful who were granted an exemption either had a medical condition or had Covid-19 during the past six months, though Australian health officials said late last year that a recent infection would not necessarily be enough to gain entry.

Tennis Australia said Djokovic’s exemption was granted in part by an independent panel appointed by the Victoria Department of Health.

Djokovic landed at Melbourne’s Tullamarine Airport around 11:30 p.m. on Wednesday. By then, he had become the central figure in a firestorm over how he had received permission to enter Australia, which is experiencing a startling rise in coronavirus cases.

The country has waged one of the most successful battles against Covid-19, but it has come at a steep price. Strict lockdowns have lasted for months. International borders were largely closed until recently. Inbound travelers had to adhere to an expensive, two-week quarantine upon arrival. For long periods, even domestic travel between states was prohibited. The country has experienced about 2,200 deaths, but since opening its borders late last year it is now dealing with more than 30,000 cases a day.

“Any individual seeking to enter Australia must comply with our border requirements,” Morrison said.

“We await his presentation and what evidence he provides us to support that,” Morrison added. “If that evidence is insufficient, then he won’t be treated any different to anyone else and he’ll be on the next plane home. There should be no special rules for Novak Djokovic at all. None whatsoever.”

Also Wednesday, Jaala Pulford, the acting sports minister for the state of Victoria, which contains Melbourne, site of the Open, said the state government would not support Djokovic’s application for a visa. Pulford wrote on Twitter that “visa approvals are a matter for the federal government.”

Her statement followed the comments of Australia’s minister for home affairs, Karen Andrews, who noted the government had the authority to block Djokovic from entering the country. In a statement headlined “Australia’s Border Rules Apply to Everyone,” Andrews said that “while the Victorian Government and Tennis Australia may permit a non-vaccinated player to compete in the Australian Open, it is the Commonwealth Government that will enforce our requirements at the Australian border.”

The decision to grant Djokovic a medical exemption from two panels of experts was greeted with skepticism and resignation from some of his fellow players, and outrage from Australians.

“I think if it was me that wasn’t vaccinated I wouldn’t be getting an exemption,” Jamie Murray of Britain said on Tuesday.

Others criticized the Australian government for bungling the process and mistreating the world’s top-ranked player.

Tennys Sandgren, an American professional player who is also against a vaccination mandate, stated on Twitter that “Australia doesn’t deserve to host a Grand Slam.”

Djokovic, who is tied with Rafael Nadal and Roger Federer for the most Grand Slam men’s singles titles with 20, would have been a favorite to win his 21st in Melbourne, where he has prevailed nine times. Melbourne has a small but energetic community of Serbian expatriates, who attend all of Djokovic’s matches at Rod Laver Arena, the Open’s main court, and provide him with rare enthusiastic support away from his homeland.

While the men’s and women’s professional tours do not require a vaccination, tennis officials are at the mercy of the local, state and national governments in power where tournaments are held. It is possible that Djokovic could face these circumstances at other competitions if countries require a vaccine for entry or a local government requires one for work.

The French Open, Wimbledon and the U.S. Open, which take place in late spring and summer, have yet to announce whether a vaccine will be required.