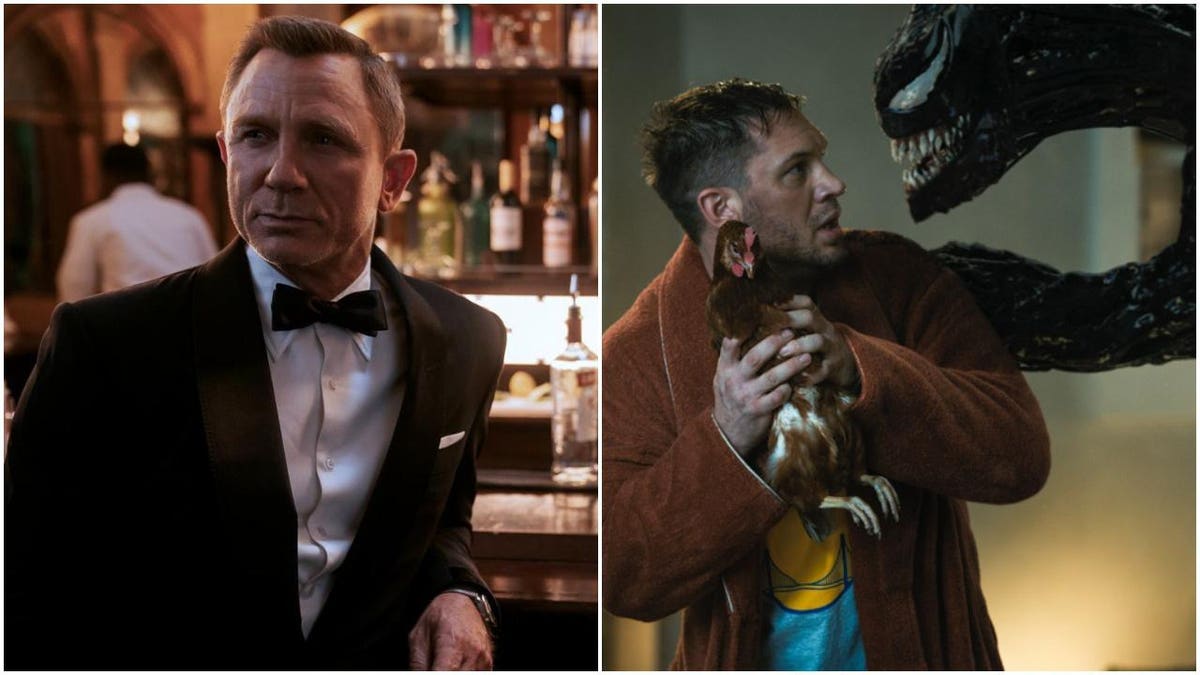 Tickets went on sale for No Time to Die this morning, including early (October 6 at around 7 pm) showings in IMAX and Cinemark XD auditoriums. The unofficial (but trustworthy) tracking has popped up here and there, with a suggestion that the fifth and final Daniel Craig-starring James Bond movie could nab an opening closer to Spectre ($70 million in November 2015) and Quantum of Solace ($67 million in November 2008) than Skyfall ($90 million in November 2012). Meanwhile, we’re two weeks out from the domestic debut of Venom: Let There Be Carnage, with the Sony sequel hoping to score something approximate to the first Venom’s $80 million domestic debut and $214 million domestic cume from back in October of 2018. To the extent that both early-October tentpoles are facing off, it’s a battle that both Daniel Craig and Tom Hardy can both win.

The case for Let There Be Carnage:

The Tom Hardy/Woody Harrelson action fantasy was supposed to open on September 24, officially serving as the kick-off flick for the post-summer tentpole season. It panicked after The Suicide Squad and moved to October 15 before realizing the error of its ways after Shang-Chi and moving back to October 1. Aspirational projections for the Venom sequel’s debut weekend skew to around $65 million. That could change either way, but it’s worth noting that a Venom sequel was never guaranteed to play on equal footing with its predecessor. Even though general audiences mostly enjoyed Venom (critical barbs aside, it ends well and leaves you wanting more), but there was always a chance that this could be a case of “folks were only curious the first time” franchise-building. Big first films based on much-anticipated marquee characters run the risk of the first film being received like a sequel.

Venom overperformed even optimistic expectations, earning $214 million domestic and a ridiculous $269 million from China alone (still the second-best solo superhero gross behind Aquaman) to earn $854 million worldwide from a $90 million budget. If it’s budgeted like Sony’s Jumanji sequels (Welcome to the Jungle cost $90 million while The Next Level cost $120 million), then (speculation alert) Let There Be Carnage cost closer to $125 million than $175 million. So, yes, Venom 2 can afford to take a big comedown from its predecessor, perhaps even earning about what we expected the first time around (which we saw with comedy sequels like Ted 2 in 2015 and Neighbors 2 in 2016). For example, a Secret Life of Pets 2-sized drop (from $368 million domestic/$875 million worldwide to $160 million/$430 million) would still give Venom 2 $93 million domestic and $420 million worldwide.

The caveat is that A) we don’t know for sure if it will play, and how well it might play, in China and B) the domestic market seems to be more predictable than the overseas one. Still, runs for F9, Free Guy, Shang-Chi and A Quiet Place part II imply that the films audiences really want to see are playing to pretty much “business as usual” domestic box office. Unless the reviews are excessively bad (as it “the movie is bad, it’s not fun, your kids will be bored and there are very few Venom/Carnage scenes”), Venom: Let There Be Carnage may play domestically pretty close to how it might have played had it opened sans-Covid in October 2020. Just because Deadpool 2 performed almost identically to Deadpool ($324 million in 2018 versus $363 million in 2016) doesn’t mean Venom 2 is guaranteed a similar path.

The case for No Time to Die

So, if Andy Serkis’ Venom 2 hits pay dirt, is Cary Fukunaga’s No Time to Die in trouble? Not automatically. Anything close to Spectre-level business ($200 million worldwide from a $70 million opening weekend right alongside The Hunger Games: Mockingjay part II and Star Wars: The Force Awakens) would be a massive success for MGM. For that matter, when adjusted for inflation, Spectre’s $200 million gross ($210 million adjusted) is pretty close to Quantum of Solace ($168 million/$214 million) and Casino Royale ($167 million/$232 million). While possible, we should no more expect another James Bond film to hit Skyfall-level business ($304 million in 2012, the third-biggest “tickets sold” 007 movie behind only Goldfinger and Thunderball) than we’d expect a future Fast & Furious movie to hit Furious 7 ($353 million)-level domestic box office. I wouldn’t expect Star Wars: Rogue Squadron to hit The Force Awakens-level grosses either.

Moreover, 007 has often shined against brutal competition. Even going back to Pierce Brosnan’s debut in GoldenEye in November of 1995, it opened a week after Jim Carrey’s kid-targeted Ace Ventura: When Nature Calls set a new record for a non-summer opening weekend with $38 million. GoldenEye set a 007 franchise record (almost tripling the $11 million debut of Timothy Dalton’s The Living Daylights in 1987) with a $26 million debut. The James Bond relaunch and the Ace Ventura sequel both ended with around $108 million domestic. Tomorrow Never Dies opened right alongside Titanic in December 1997, legging out to $125 million domestic while Titanic sailed to $600 million. Daniel Craig’s Casino Royale never once topped the weekend box office and placed second in its first three weekends against Happy Feet yet still managed a $40 million debut and a $168 million cume.

The 007 series has thrived even as the definition of “What’s a blockbuster franchise?” has so aggressively changed over the last 25 years. It’s why Skyfall topped $1.1 billion a month before The Hobbit: An Unexpected Journey topped $1 billion in late 2012. It has succeeded alongside the likes of Ace Ventura, Toy Story, Harry Potter and Star Wars by standing out from the pack as a non-fantastical super-duper action franchise tentpole for grown-ups, and especially moviegoers uninterested in (or wanting more alongside the) big movies about superheroes, wizards, robots and related fantastical heroic journeys. It has not always been the king of the box office mountain, but it has always stood tall alongside an evolving industry. As such, if it delivers the 007 tropes (the glitz, the locales, the gadgets, the action, the PG-13 sex and violence, etc.), No Time to Die should stand tall alongside its tentpole competition.

Venom: Let There Be Carnage and No Time to Die are both marquee character-centric sequels to franchises which audiences have previously enjoyed. It’s not as simple as saying “my kids want to see Venom while my wife wants to see James Bond,” but that’s a factor even with overlapping demographics. The biggest challenge, barring Covid-specific downswings (and acknowledging Covid variables), is in tempering expectations. A Venom 2 that “only” earns about what we expected from Venom can still be profitable. A No Time to Die that earns closer to Spectre (or even Casino Royale) isn’t automatically a loss. If both films are well-received and relatively successful, then it will be a win by virtue of showing interest in the franchises for when the storm clears. Hopefully both anticipated sequels will perform well enough alongside each other for their respective franchises to continue, well, die another day.