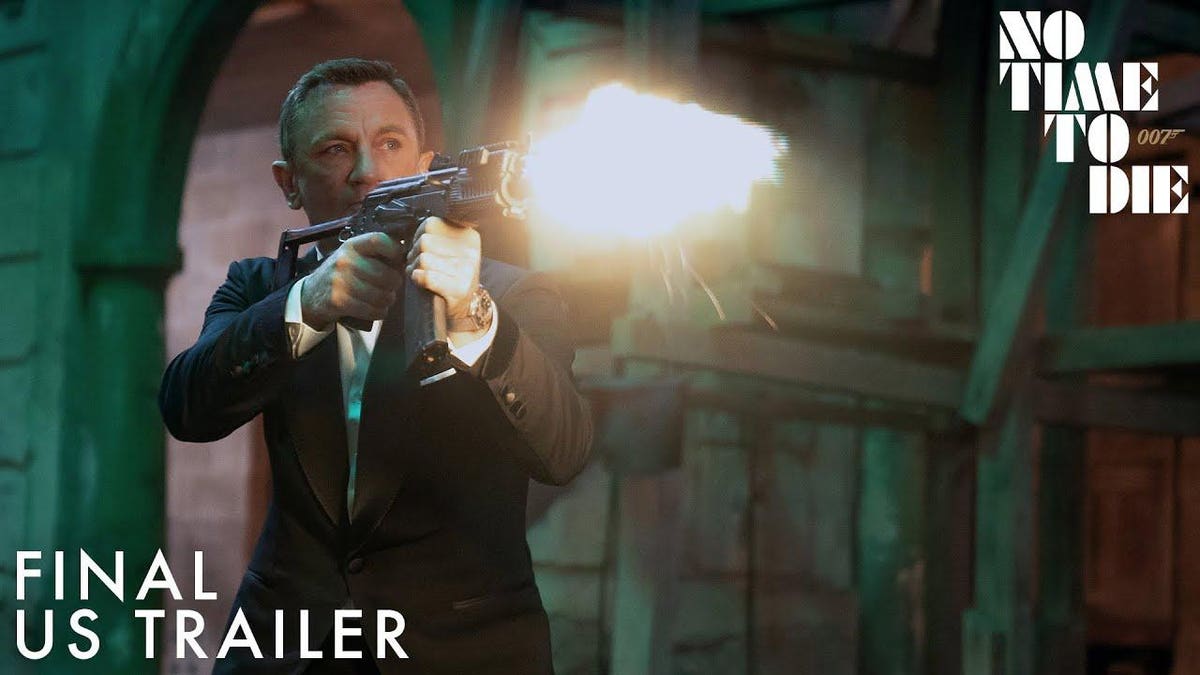 Despite a two-year delay, No Time to Die is opening in a month and we know almost nothing about its plot or character arcs.

Just in time for the opening weekend of Marvel’s Shang-Chi and the Legend of the Ten Rings, MGM and Universal have graced us with this final (god willing) theatrical trailer for No Time to Die. The film opens in just under a month in the United Kingdom and elsewhere in advance of its October 8 domestic debut. Fun fact: The first trailer for this one dropped on December 4, 2019. Considering the two years worth of delays, it’s frankly a miracle that the marketing campaign has been as spoiler-free as it is/was.

We still don’t know the exact nature of Lyutsifer Safin’s (Rami Malek) world-imperiling plot, nor how Dr. Madeleine Swan (Léa Seydoux) fits into this and/or why James Bond (Daniel Craig, one last time) feels so bloody betrayed. On one hand, that’s damn impressive. It’s also encouraging when you consider how much of Black Widow felt like a repeat viewing even on the first go-around. On the other hand, it’s weird how the last two 007 movies have leaned into “mystery box” marketing. That’s not a criticism, mind you, just an observation.

Even as recently as Skyfall, the marketing revealed Raoul Silva (Javier Bardem)’s single-minded revenge plot against M (Judi Dench), the fact that Bond had been gravely wounded and presumed dead during a botched mission and that M was sending an unprepared Bond into the field despite those around him seeing that he’s clearly not up to snuff.

Sure, the marketing barely hinted at the Home Alone/Stray Dogs third act, which saw bad guys invading Bond’s “impenetrable fortress,” but the only huge spoiler left out of the campaign was whether or not M survived her brush with Silva. That was nine years ago (!), before so-called spoiler culture took over the Internet and what used to be a pretty good strategy (don’t give away the whole damn movie in the previews) became an online obsession with treating even simple/basic storytelling reveals as unforgivable spoilers.

So, for example, the Blade Runner 2049 campaign told general audiences nothing about the movie and forced critics to tiptoe around a revelation about Ryan Gosling’s protagonist which was revealed in the first five minutes. The James Bond series is as mainstream as it gets, especially among those old enough to have seen a Timothy Dalton or Roger Moore movie in theaters. And yet, now even the James Bond series treats conventional plot points like forbidden secrets.

That’s fine, except when everything is shrouded in mystery it merely gets folks making up their own theories about what’s actually going on. Fun fact: If you watch Spectre with subtitles, the speaker tags spoil the Blofeld reveal an hour before the movie does. Conversely, the campaigns for pretty much every 007 movie before Spectre essentially laid out an abridged version of the movie for your consumption.

GoldenEye’s second trailer revealed that Sean Bean’s 006 was the baddie, although that he “dies” in the prologue and yet gets second billing in the credits was itself a pretty big clue. You knew going into The World Is Not Enough that M was going to get kidnapped, and you knew walking into Tomorrow Never Dies that it was a soft The Spy Who Loved Me remake. That said, giving audiences the expected goodies allowed the campaigns to hide some treasures.

Think, offhand, Teri Hatcher’s premature demise in Tomorrow Never Dies or the reveal that Renard (Robert Carlyle) was merely the henchman to Elektra King (Sophie Marceu) in The World is Not Enough. Honestly, some of the best unspoiled plot twists have been hidden via misdirection. We were so focused on Gwyneth Paltrow wearing the Iron Man suit in Iron Man 3 that we didn’t have a clue about Ben Kingsley’s Mandarin reveal.

With a month to go, and after two years of stop-and-start marketing, all we really know is that Bond is retired and living with Dr. Swan, Lashana Lynch’s Nomi is the new 007, Felix Leiter (Jeffrey Wright) needs him to come out from the cold, and Blofeld is doing Hannibal Lecter cosplay. We also know that the film is opening now less because the time is finally ripe and more because MGM and friends just don’t want to delay the damn thing anymore.

That said, it’ll be the first non-superhero, animated or horror-specific tentpole since F9 in mid-June, and the last such offering until, unless Dune pulls off a miracle, The Matrix Resurrection. The long runway afforded to the 25th James Bond movie leaves open the possibility of legs closer to Spectre ($200 million from a $70 million debut) than Quantum of Solace ($168 million/$68 million). I dare not hope for legs akin to Skyfall ($304 million/$90 million).

However, that beloved action spectacular benefited from (along with rave reviews, 50th anniversary buzz, and a crowdpleasing trip-wire intensity) being the only non-geeky action tentpole from early-November 2012 until A Good Day To Die Hard in mid-February 2013. All things considered, I’d argue a global cume closer to Casino Royale and Quantum of Solace (over/under $600 million) than to Spectre ($881 million) or Skyfall ($1.1 billion) would be a measured win, but that’s for another day.